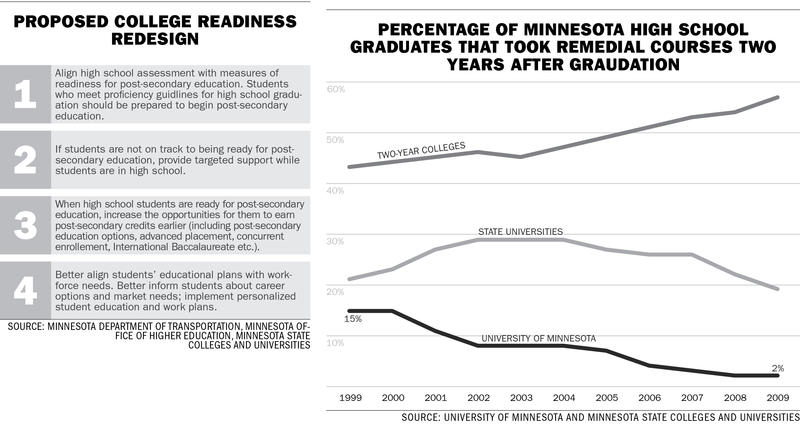 An increasing number of Minnesota high school students are struggling to be fully prepared for college classes.

The Minnesota State Colleges and Universities system — which includes all state-funded colleges besides the University of Minnesota — has found that more and more students need remedial courses.

A 2010 report found that 40 percent of those who graduated in 2008 needed remedial courses two years after leaving school — a 7 percent increase from 1999.

That increase is leading more students to take longer to earn a degree and in many cases, not at all.

In conjunction with the Minnesota Department of Education and the Minnesota Office for Higher Education, MnSCU produced a four-point plan to help high school students prepare for college earlier.

The group wants to require high schools to administer a test for college readiness that aligns with state-standardized testing in high school.

“If you can align assessment then you’re in a situation where you can be more proactive earlier on with students who are not on track to be ready,” said Karen Hynick, MnSCU Director of College Transition.

Public schools can currently opt into this plan to test students for college readiness along with state standardized testing.

Test results can show if a student needs to catch up or if they’re prepared for secondary education.

If they’re behind, they can take appropriate classes in high school to close the gap, and if they’re ahead, students can start taking colleges classes while in high school — something some high school students already choose to do.

The 2010 study by the University and MnSCU found that the majority of students who took remedial courses two years after they graduated were predominantly in the MnSCU.

The report notes that since 2000, the University has become increasingly selective, and students who need to remedial courses are most likely not admitted to the University.

Of those that graduated in 1999, 33 percent took remedial courses two years after graduating.

In 2008, 40 percent took remedial courses two years after college, and only 2 percent of those went to the University, and 48 percent went to a MnSCU school.

The drop in students taking remedial courses at the University, said Hynick, can be attributed to the school’s increasing selectivity.

The 2010 report found that nearly all University remedial courses are in mathematics.

MnSCU and its partners are hoping to sell their four-point plan to legislators by highlighting the tax benefits.

They say if the plan is required in all schools, taxpayers will see a quicker return, as in students graduating from college quicker and entering the workforce earlier.

“Students are not like a conveyor belt. They are each unique,” said Hynick.