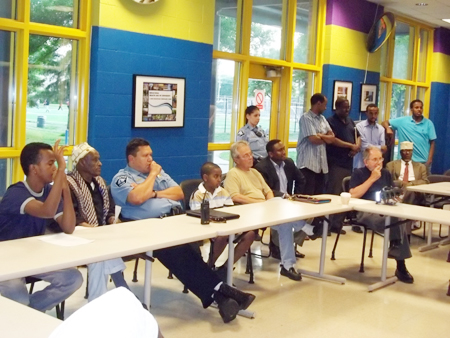 Any visitor to the office of the Confederation of Somali Community in Minnesota (CSCM) finds it humming with activities. Drop in on any weekday or Saturday and you will find four to five people waiting for the Executive Director, the youth program manager preparing for the afternoon homework help or youth drama session or the girls’ group activities, a social services specialist troubleshooting clients’ problems, two University of Minnesota students researching employment options for Somali young adults, a retired professor dispensing advice on community engagement, elders mediating conflicts, or a volunteer dispositional advisor of 30+ years of experience assisting community members navigate the legal system.

Seeing all these interactions, one is tempted to wrongly come to the conclusion that all is well with CSCM and it is on the upswing. Just being there projects vitality and community support.

All a visitor sees is that the office is the throbbing heart of the community and there is much truth to this conclusion. But, coming to such conclusion you miss important facts about the organization’s operations. The fact of the matter is that in less than a month, CSCM will be on the crossroads and on a rendezvous with destiny. In few days, CSCM’s board of directors need to make a gruesome existential decision about the organization’s future. They have to decide whether to spring the organization back to life continuing its services or whether to close its doors.

For the last three years, CSCM was on a fiscal spiral towards lowered expectations. The symptom of this decline was writ large in the organization’s financial reports, dwindling grant opportunities, curtailed programming, laid off staff, and the reduced staff hours enacted by the Board of Directors on a quarterly basis.

The future of CSCM was much brighter at the beginning. Established by a group of Somali professionals and elders, CSCM has been meeting the significant resettlement and self-sufficiency needs of Somali immigrants since 1992. It fulfills its mission of Strengthening the capacity of Somalis of becoming contributing members of society while preserving their culture through a continuum of programs that serve more than 2,500 Somali immigrants per year. Over the past 20 years it has developed strong partnerships and a reputation for serving all Somalis, irrespective of age, gender, class, group or political affiliation.

How did it come to pass that an organization so vital to the community descended into such dire straits? The answer is inherent in the origins of the organization and its transformation through the years. CSCM is caught between the “rock and hard place” of an attempt to be every community member’s friend/helper and the reality of running specific programs.

CSCM fluctuates between a grassroots organization that accommodates every walk-in and a service organization that receives only eligible participants as specified by grant makers. This bi-polarity was inherently imbedded in the organization’s personality from its first day of operation. From 1992 till 1997, CSCM saw itself as a membership-based, mutual assistance organization that elected its management and relied on the support of the community.

But, later it was transformed into a management-led organization, while never leaving its populist origins. This default to its grassroots character is demonstrated by the focus the organization gives to convening community-wide events, like Somali Independence Day, and building community cohesion through advocacy, engagement and social entrepreneurship.

A task force has been established to develop strategies on the way forward for the organization. The aim is to reconstitute CSCM to a higher level of vitality. The Group has been working for the last one month and are debuting their efforts with a large consultative conference they held at Brian Coyle Center on Dec. 15, 2012.