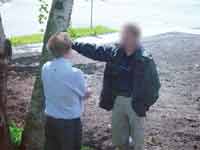 An attorney representing the Arevalo family negotiates with an unidentified immigration official.

It was 9:45 in the morning when I received a call in my office. A friend was calling me to warn me that an immigration raid was happening at that precise moment in a house in South Minneapolis.

My friend said that immigration officials were furiously pounding on the door after the owner had refused to let them enter.

I took my camera, my notebook and my press badge and left immediately. Upon arriving, I was confused. Nothing seemed to indicate that there was an ICE operation going on. There were two cars parked outside the house, but neither one had any ICE or other official markings. I got out of my car and approached the house.

At that moment, several agents saw me and my press badge and immediately began a discussion among themselves, presumably trying to figure out what I was doing there.

I approached the house and began to take photos. The agents at that point put on their jackets and surrounded the house. I could see the letters on the jackets: POLICE-ICE. Until that moment, you would have never thought that those people were immigration officers.

I approached the door and Bruce Nestor, the family’s lawyer came out to greet me. Bruce filled me in and then went to speak with one of the ICE officials to figure out exactly what was going on. After he was done, I asked to speak the woman inside. He asked her permission first, and at that moment, Susana De León, who is also an immigration attorney as well as Nestor’s wife, arrived and we went in where I heard the full details of what had gone on.

An unexpected visit
Saula Arevalo, the owner of the house, told me that it was 9:30 a.m. when someone knocked on the door. When she answered, a group of men identified themselves as police officers. They showed Arevalo a photo of a young man with a shaved head who was apparently a member of a gang and asked her if he was in the house.

She responded that she did not know that person and did not know who he was. They asked to enter and search for him; at which point, she refused. According to Arevalo, she denied them entrance because they did not have a search warrant.

The officials then identified themselves as immigration agents and began to pound on the door and the windows. She says they shouted at her that the best thing for her was to open the door and let them enter and that she was only making things worse.

Arevalo then took the phone and called a friend who put her in touch with De Leon and Nestor.

The agents threatened to kick the door in several times, but she continued to deny them entrance and told them she would not let them enter without a warrant. The agents then told her that they would go seek out the warrant and would then arrest her and deport her immediately.

The situation became so tense that a Minneapolis police squad came, but once they determined it was an ICE operation, they left. Nestor verified that there was indeed a pending deportation order against Saula and her husband, Umalo.

Arevalo cried and between sobs said “… I cannot go away without my children, please… bring me my children, I do not have anyone to leave them with.” Nestor and DeLeon evaluated the situation and after consulting with Arevalo, decided to negotiate with the agents.

The negotiation
Bruce suggested to Arevalo that she turn herself in to ICE in one week’s time. In exchange, the officials would not seek a search warrant and arrest and deport her immediately. This would give Arevalo a chance to go in front of a judge to defend her case. Arevalo agreed and the negotiation was carried out with the immigration agents accepting the terms. Bruce returned and said that a notice for her and her husband to voluntarily appear before immigration in a week would arrive within 20 minutes.

ICE tactics
While we waited for the arrival of the order, we had the opportunity to discuss what had happened again. The question of the legality of the ICE procedures arose. Nestor indicated that he had heard of similar cases, and so have other lawyers he knows. These tactics have also been reported to our newspaper offices on repeated occasions during last the three months.

The testimony of witnesses indicates that ICE agents knock on the door, identify themselves as police officers looking for someone, sometimes a female, sometimes a male. When the door is opened, they enter forcefully and detain all those who cannot identify themselves. According to the witnesses, the agents in these cases have not shown a search warrant and enter forcefully.

We have not been able to verify if agents in these cases have managed to obtain the authorization of an adult in the house to enter or if they force their way in after tricking someone into opening the door. We have not been able to speak with anyone who can verifies or deny these testimonies, although Arevalo’s case would seem to.

Arevalo and her husband managed to gain a little time. Arevalo acted correctly and courageously in denying entrance to the officers without a search warrant.

She managed to get her lawyers involved before the agents obtained the search warrant, she managed to call in the press to document the situation and she and her husband were able to negotiate their case. Hers is an example of what to do right in a situation like this.

As a member of the press, I was able to witness first-hand how these operations take place. I heard, over the phone, the shouts of the agents trying to enter the house and saw the suffering of a mother in a terrible situation. There was also the brief confrontation with the immigration agents and although there was some tension, this did not go further.

The necessity of immigration reform is now more obvious than ever. When authorities begin to track down innocent people, who have not committed any crimes, indeed, whose only crime is to have entered the country without authorization, this reform becomes urgent, because no honest family should have to find themselves face to face with La Migra.

Share your views on immigration issues in our “Global/Local forum”:https://www.tcdailyplanet.net/forum/65.