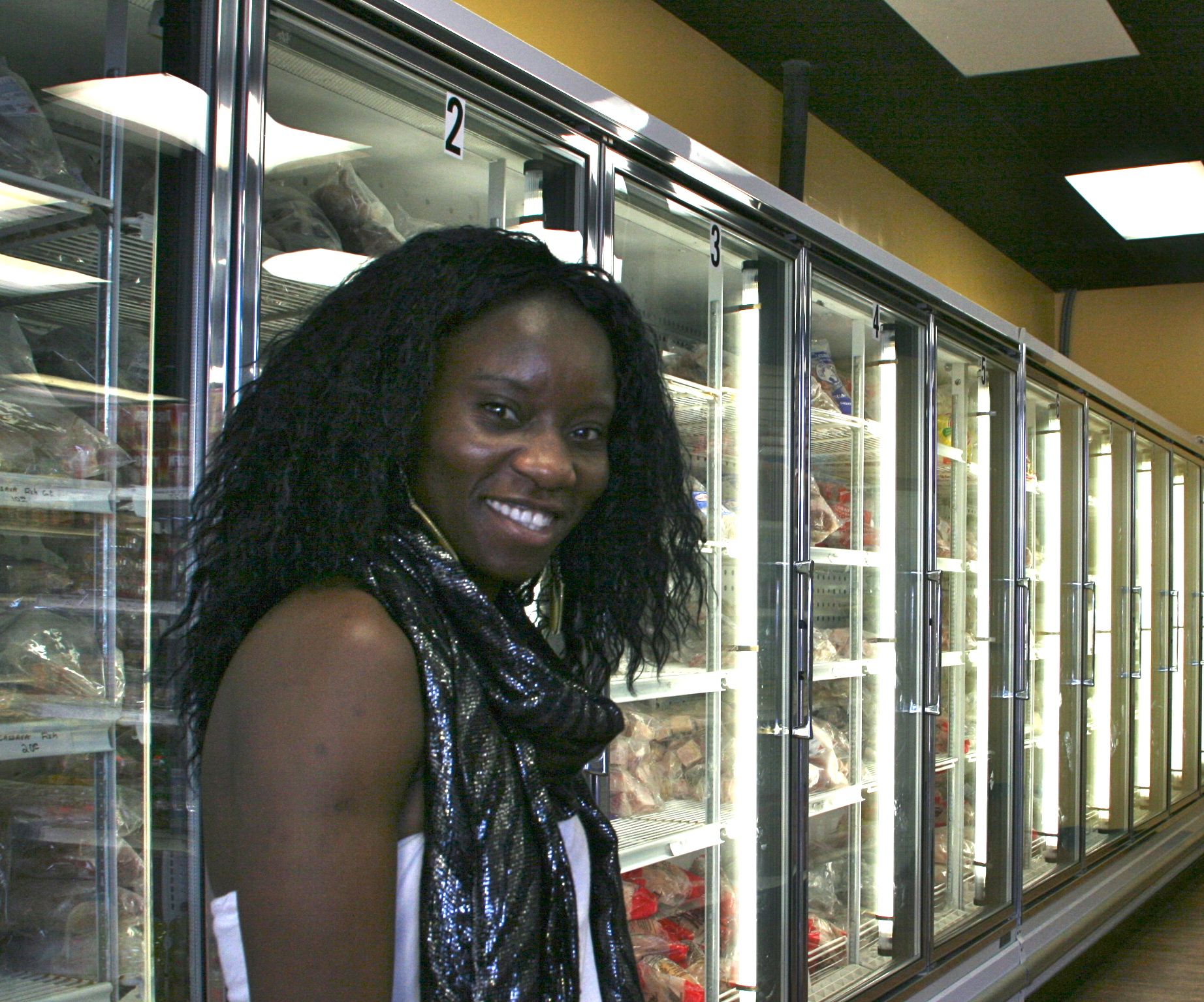 The sign on the front of the store says “Food Market—African-American-Caribbean.” The owner’s business card says, “Ehoh Edward, CEO ‘EZ Stop Food Market.’” There are two mottos on his card: “For all your African food items,” and  “Always focusing on future growth.”

Akakpo and his wife Woulli Tidjani came to Minneapolis from Togo, and have owned the store for about five years. They’re lived in Minnesota, “a long time,” said Tidjani. The little store is always filled with people from the neighborhood and beyond. They talk and joke with Akakpo and he seems to know everyone by name. “The customers—they’re all my friends,” he says.

Liberia, a country established by freed American slaves more than a century and a half ago, has many connections to the United States. The capital Monrovia is named after Pres. James Monroe and the official language is English. The Liberian flag is based on the American flag with one star in a field of blue (the African mainland) and 11 red and white stripes (the 11 signatories of the Liberian Declaration of Independence). It looks a little disconcertingly like the flag of Texas. 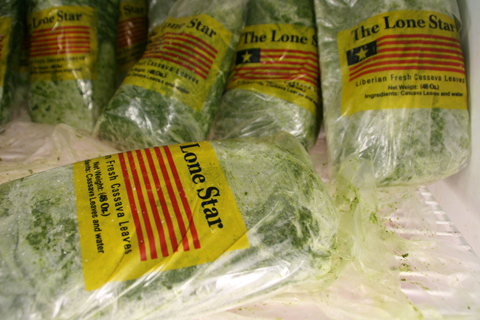 Liberia is an equatorial country and so, like Minnesota, has only two seasons. But, instead of winter and road repair, the Liberian seasons are dry and wet and the foods reflect the climate.

Vegetables—the kind that are popular in the American south—are the major ingredient. Most of the dishes are stew-like and made with your choice of finely chopped greens of some sort, mixed with meat or fish and served with rice or fufu. Red palm oil also makes up a major part of the diet and large amounts are added to recipes. 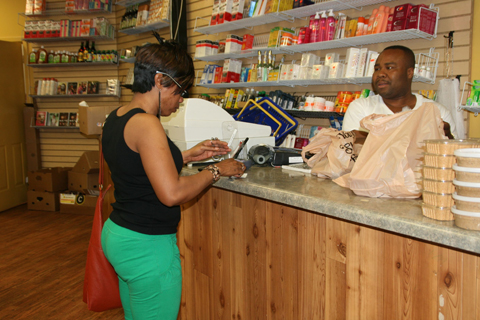 “Palm oil is important and it’s very healthy. Dr. Oz—you know Dr. Oz—he talks about how healthy it is. It’s why people in West Africa don’t get Alzheimer’s,” says Akakpo.

Bitter flavors are also popular. Liberians wax nostalgic for Toborgee beans, but admit that most Americans hate them. “Africans like bitter foods,” one customer tells me. “Bitter is healthy,” says Akakpo. “ The bitterness kills disease bacteria in the stomach. If someone eats too much sugar they get diabetes. The bitter counteracts the sugar.” 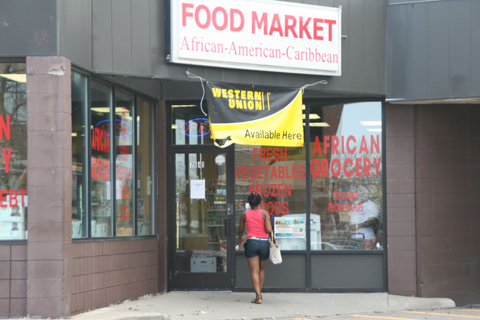 Everything is served with hot sauce—very hot sauce. Sweating from the inside out is also considered healthy.

Terry Yarpah, a young Liberian woman now living in Coon Rapids, says that she cooks African food almost exclusively. “We go out and eat if we want American food,” she says. “And that’s expensive.” She poses for a photo then tells me how to smoosh the greens with the meat. There’s a utensil—a wide, flat mortar-and-pestle-like object—for that. 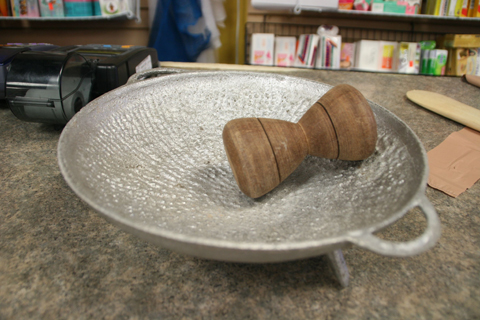 Everyone seem obsessed with their national cuisine and they all know how to cook. Any questions about what to do with a particular ingredient elicited a five-minute detailed answer and sometimes a recipe. The recipes are not precise. There’s no “one cup of this” or “one tablespoon of that.” There’s no, “cook for 20 minutes at 350º.” It’s more “Cook the greens with the meat like this, and serve rice.”

Doyen Kofa, originally from Liberia but now living in Brooklyn Park, has his own recipe for pepper soup, one of the classic foods of Liberia. You parboil the raw fish, he said, until it’s half done. You add water, tomatoes, and sliced onion bitter balls (a kind of bitter tasting berry); and let it cook down, he said. 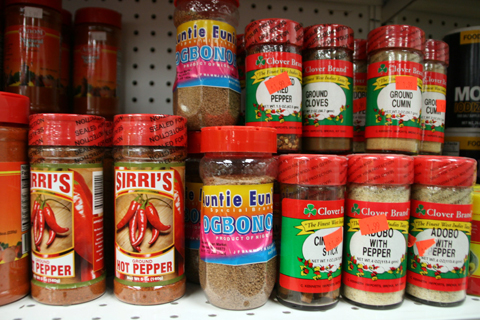 Common spices are nutmegs, curries, dried shrimp, suya mixes (a spicy Nigerian peanut shish kebab dry rub), and fiery orange habanero peppers. Groundnut and cesame (I finally figured this out by sounding out the word) were packaged to travel from Togo to New York with the least problems in customs.

The freezers are filled with frozen vegetables like imported collards, cassava, and jute leaves and with meats like chunks of croaker, ox tails, cow feet, cow skin, and stewing hens. 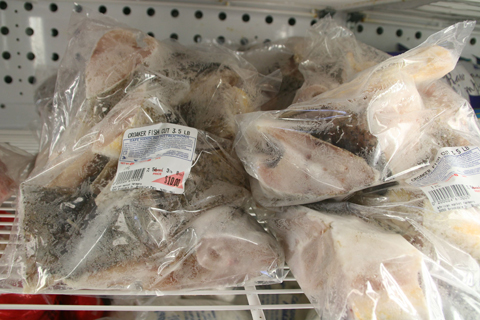 The store is bright and clean and even if you haven’t a clue what to do with what they sell, just ask anyone and you’ll get an answer. 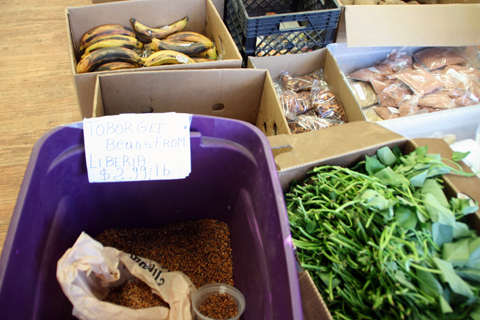 If  want to try some Liberian food before you tackle the cooking yourself, check out Mama Ti’s African Kitchen for takeout, located a little over a block away from the store. Then, go back to the store and be ready to buy something and to experiment.

African American Caribbean food mart is located at 7641 Zane Avenue North, just off Brooklyn Boulevard in Brooklyn Park, in a tiny strip mall. You might want to get directions first. It’s worth the trip.