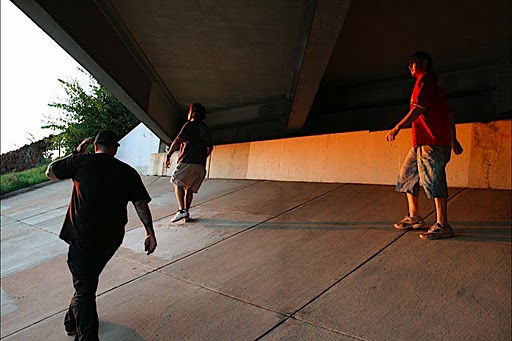 Current AIM Patrol director, Mike Forcia (46, Bad River Ojibwe) is no stranger to violence at the hands of the Minneapolis Police Department. In November, 1999, Forcia was brutalized by officers who claimed to have “misidentified him as a suspect.” He was eventually awarded $125,000 by the MPD who settled his case in 2002.

Forcia, who today serves as vice-chair of the Minneapolis American Indian Center and owns the Wolves Den café, says “relations with the Minneapolis Police will probably never be what how we’d like to see them.” Forcia admits, however, that communications between the community and police have come a long way since AIM Patrol first took to the streets of Phillips in 1968.

Dave Wilson (54, Leech Lake Ojibwe) was on that first patrol, helping to protect the Native American Community from the primary security concern of the day: police brutality. Over the years AIM Patrol came and went – reemerging in the mid-1980s as serial killer Billy Glaze terrorized Indian women, and disappearing again a few years later when patrol members came under fire from gangs. Today, as AIM Patrol reconstitutes, Wilson, a member of the AIM Grand Governing Council and a veteran of Wounded Knee, remains, supporting new leadership and putting his boots on the ground once again.

The Circle’s Jon Lurie sat down with AIM Patrol’s director and longest serving patroller to discuss the issues that are calling “the eyes and ears of the Minneapolis Native American Community” back into action.

Lurie:  AIM Patrol was formed in the late 1960s to counteract police brutality in the Native community. What are the security concerns on the streets of Phillips today?

Forcia: The security challenges faced today continue to be most difficult for the chronic homeless and alcoholics, being on the streets in a state where they can’t defend themselves. Today they are being attacked by gangs of young East Africans, and also by people in our own Native community. There has been a lot of animosity and a lot of tension between the Native community and the Somali community. I recently met with Senator Franken, a member of the Committee on Indian Affairs, and told him that I am greatly concerned that something’s going to trigger an outbreak of violence between our communities. The problem is not that the Somali people are bad, but that a few criminals from that community have been attacking our people, and in response some of our people are blaming the entire Somali community.

Lurie: What steps have been taken to alleviate tension between the communities?

Forcia: In attempt to stave off violence we established a committee to address the issue of attacks upon our elders and our youth. The committee was active over the past spring and summer. We met five times with members of both communities – but there was hesitation on both sides when it came to making a commitment to form a joint security force. We’re going forward with AIM Patrol because we realize we have to protect our own people. We have to take back our community so there can be less fear out there, and people can feel comfortable walking the streets.

Lurie:  For decades bad blood has existed between the Minneapolis Police Department and the Native American Community. How would you characterize police/community relations today?

Wilson: Back in 1968, when AIM Patrol first hit the streets, the police were very ignorant to our religious and community needs. I believe they’ve become aware of the lifestyles of Native American peoples. They’re battling the alcohol, drugs and prostitution in the community. These are things AIM Patrol is ill-equipped to do. I think relations are still strained, but at least the Minneapolis Police are reaching out to members of the community to try to resolve these issues. We’ve had a number of meetings with police department. The beatings and the mistreatments that used to occur every weekend like clockwork are no longer happening. That doesn’t mean we don’t still have problem with the police. But a lot of times when we find somebody that needs help we’ll actually call the police and ask them for help. They were probably the last people we would have called in 1968.

Lurie: Was there a single incident that inspired you to revive AIM Patrol?

Forcia: On July 2, 2008 my son and I found an Ojibwe elder struggling on the ground outside of the Indian Center. His name was George Robertson – I knew him as Old George – he had been attacked by someone who robbed him of the pain medication he was taking for a broken foot. George had boot marks on his ribs, was unable to talk, and could barely breathe. When the EMTs came they had this look of disgust on their faces. Rather than place him on a gurney, they grabbed him by his feet and around his ribs – areas where he had broken bones, and carried him up a flight of stairs. He died shortly thereafter. No one was ever charged for killing Old George.

Lurie: How will AIM Patrol make the community safer?

Forcia: We will be out there as witnesses, assisting both the old and young, and acting as escorts for those who want to feel safe walking across the neighborhood.

Wilson: Mike’s not one to toot his own horn, but he’s been quietly doing his part to improve lives of our people for years. Every Sunday at the Indian Center he’s been providing our homeless a free hot meal. Now we’re getting up to eighty people coming every week for a meal, and real community support. We have doctors volunteering to cook and to wash dishes. We have people employed in the community coming down to volunteer. These meals are letting our homeless people know they’re not forgotten. These are our fathers, mothers, aunts, uncles, brothers, and sisters, and they’re dying down by the rivers and along the railroad tracks. If we don’t care for them no one will.

Lurie: How will AIM Patrol be funded?

Forcia: What we’re doing doesn’t cost a lot of money. We’re going to implement a recycling program on the reservations and in the community in order to raise some funds. We call it Recycling for Natives. Once a month our volunteers will travel to a different reservation and do clean-up projects. We will also collect recyclables from community organizations here in the Twin Cities. We will achieve more than just raising money; we will be taking care of Mother Earth. That’s the reason we were put here, to take care of Mother Earth and to take care of each other.

Lurie: What can community members do to help?

Forcia: We’re looking for more volunteers to help us keep the Indian Center open on Friday, Saturday, and Sunday nights. We believe that less people on the streets will equal a safer community. We want to offer activities at the center like basketball, crafts, and language circles. I’ve heard a lot of feedback from directors of Indian organizations who tell me this is a great idea, and it’s those very individuals that we need to come down and volunteer.

Wilson: We’re also seeking donations of jackets, backpacks, blankets, socks, and tobacco products – things we can provide to our homeless people to help make their lives a little easier. We want to expand the definition of AIM Patrol to include people who will go down to the homeless camps, bring hot soup in winter, call an ambulance if needed, and check on a population that’s currently being ignored.