I’m not even going to try to explain the whole ball game, but here are a few of the hits and misses from this week’s health care policy news: numbers on Minnesota’s uninsured and a plan to make it better.

According to a Minnesota Department of Health report released this week, the number of uninsured Minnesotans remains high, with nine percent uninsured in 2011, compared to six percent in 2001. That’s a total of about 490,000 Minnesotans without health insurance. The biggest factor: declining employer coverage. About five percent of Minnesotans are covered by individual policies, 56 percent by employers and 29 percent by public insurance.

Young adults — 18 to 34-year-olds —are most likely to lack coverage, and the elderly being almost all insured, as they are covered by Medicare.

The impact of federal health care reform is striking in the 18-25 year old population. In 2009, 60.9 percent of young adults were covered under the employer-provided insurance plans of their parents or guardians. Today, the federal Patient Protection and Affordable Care Act (aka “Obamacare”) requires that they be allowed to continue coverage on their parents’ plans. In 2011, 73.3 percent of young adults were covered by a parent or guardian’s employer-provided insurance.

The plan to make it better? Legislators unveiled a “Healthy Minnesota Exchange” proposal. Supporters at Take Action Minnesota said it would “create a new website with ‘apples-to-apples’ comparisons of private and public health care options; connect Minnesotans to tax credits and other forms of financial assistance to offset the cost of coverage; and negotiate on behalf of consumers and small businesses for more affordable coverage options.” The 2010 federal healthcare reform legislation requires states to put exchanges in place by January 1, 2014.

Both Representative Erin Murphy (DFL-St. Paul) and Senator Jeff Hayden (DFL-Minneapolis), who are sponsors of the Healthy Minnesota Exchange legislation, emphasized the importance of action by the health care exchange to reduce health disparities. The Minnesota Compass graphic below shows the extent of racial disparities in health care coverage in Minnesota. 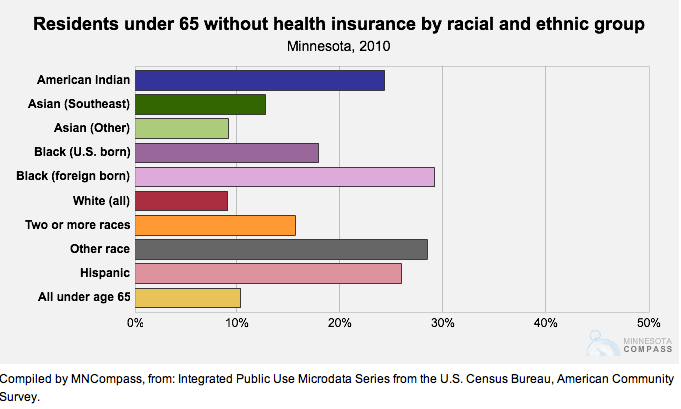 At a press conference announcing the bill, Hayden said “The Health Care Exchange will result in better health care for all Minnesotans and a better value for all,” and “would cut number of uninsured Minnesotans in half.”

Murphy said “It’s really important that we create an open and transparent governing board,” and emphasized that the board should have no conflicts of interest, a robust representation of Minnesota voices, and protection from poor-quality insurance products. She said the exchange should be allowed to negotiate the best deals on behalf of consumers and small businesses and would also offer information about Medicaid and MinnesotaCare enrollment.