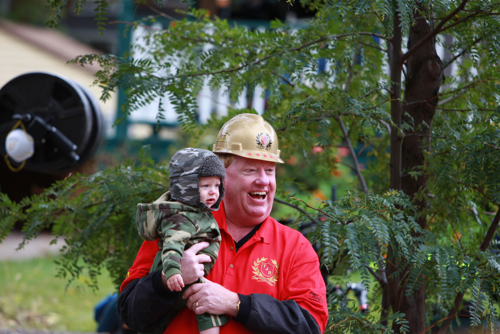 While the crew continued to set up shots for the home tear-down, there was more than enough time for photo opportunities in front of the old house. (All photos by Dusty Hoskovec)

According to the City of St. Paul news release, Sandy Morris started a daycare after the birth of her first child, when she discovered that none of the daycare options met her standards, and that “most high-quality daycares were too expensive for her neighbors,” in the community where she grew up. That was 16 years ago. Today “Tia Sandy” and her family still live a 100-year-old house that just can’t meet the needs of her multicultural daycare center.

According to the City of St. Paul press release:

Unfortunately, Sandy runs her daycare out of their 100-year-old home, which is falling apart. The numerous repairs needed to make the home safe threaten to shut down the daycare. Now it is up to Ty and the designers to build Sandy, 40, her daughter Catricia, 15, and her son Mychal, 12, a safe home that is a sanctuary for their family and will enable Sandy’s daycare to remain a center of community life and education. …

District del Sol is located on Saint Paul’s West Side just south of downtown. The West Side gets its name because the neighborhood is the only part of Saint Paul on the west side of the Mississippi River, which borders the neighborhood on three sides as it curves around the valley. The district hosts the city’s oldest Mexican restaurant and one of the largest Cinco de Mayo Fiestas in the United States. District del Sol is known as one of Saint Paul’s most diverse and spiciest neighborhoods.

Cast and crew of Extreme Makeover “Home Edition” set up for a shot prior to demolition in what used to be the front lawn.

Kermit the Frog from the Muppets spoke to Sam Champion of Good Morning America from inside the backhoe.

The community showed their support for the Morris family by coming out to celebrate the spectacle, despite the chilly weather.

Kiah and Gabrielle, arrived with signs conveying their close connection to the family.

More than enough people were on site volunteering their time to cheer on the cast and crew, and help out when needed.

A young boy peered over the barricade while waiting for the demolition to begin.

The crew teased the crowd for hours with the bucket of the backhoe looming over the house.  Several times, chants of “Tear it down!  Tear it down!” erupted from an impatient crowd.

Finally more than two hours after the initially scheduled time and with all cameras in place, a member of the crew pushed the bucket through the roof with a cloud of dust rising from the rubble.

It began to rain as the backhoe dug even deeper into the house giving the crowd a glimpse of the interior before it was completely torn down.

Want to see the Extreme Makeover in progress? You can -from 8 a.m. to 8 p.m., through October 9. There’s no parkiong near the site, but free parking and shuttle service are scheduled at Signal Hills Center Parking Lot, 50 Signal Hills Center, West St. Paul.

Neighborhood House and the American Red Cross have a food and blood drive to accompany the build. The goal is 25,000 pounds of food and 4,800 blood donations during the week — bring food to the shuttle site or to Neighborhood House. Contact the Red Cross for information about the blood drive at www.givebloodgivelife.org  to schedule an appointment for the “extreme” week of blood drives.