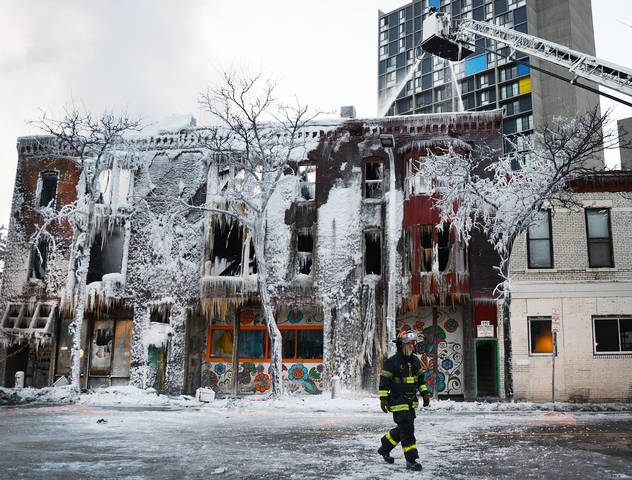 Firefighters continue to hose down Minneapolis apartments and a grocery store that exploded and caught fire Wednesday morning near Cedar Riverside. A total of 14 people were taken to hospitals, 6 in critical condition. The cause of the fire is still being investigated. (Photo by Holly Peterson)

An explosion and fire at a Cedar-Riverside building Wednesday morning injured 14 people, 6 critically.

The building, located at 516 Cedar Ave., is owned by Garad Nor of Wadani Properties LLC and houses apartments and a grocery store.

The Minneapolis Fire Department responded to a report of an explosion at 8:16 a.m., according to a press release. Firefighters entered the three-story building and rescued victims inside, but the fire’s intensity and the building’s instability soon forced them to evacuate. According to the release, it’s still not certain whether everyone made it out of the building. More than 50 firefighters fought the blaze from outside for hours.

The cause of the fire is still being investigated, Minneapolis fire Chief John Fruetel said at a Wednesday afternoon press conference at the Brian Coyle Community Center. No firefighters were injured, he said, and crews were set to remain into the evening. Inspectors will decide Thursday whether the building is fit to remain standing.

The injured were taken to Hennepin County Medical Center and University of Minnesota Medical Center-Fairview. HCMC Spokeswoman Christine Hill said HCMC admitted 7 adults in satisfactory condition and 3 in critical condition. Three victims were transported to Fairview, and a Fairview spokeswoman declined to comment. It’s unknown where the last victim was taken, according to the fire department release.

The building was last inspected in 2012 and had no outstanding inspection issues, according to the fire department release.

Cedar-Riverside is home to a large East African community. Rybak said it’s unfortunate the fire happened in a community of immigrants who have “already been through a lot.”

Rybak, Warsame and mayor-elect Betsy Hodges visited victims in the hospital on Wednesday. Hodges said the fact that so many community members attended the press conference is a good sign that residents are willing to help in any way they can.

The fire also damaged a nearby mosque. Warsame said services will be held at the Brian Coyle Center for the time being.

Freezing temperatures made it difficult for firefighters to stop the blaze Wednesday morning. From a crane above the building, they sprayed water that turned to ice on the building’s surface and nearby trees. Fruetel said the fire had been mostly contained by th afternoon.

Abdi-Fatah Ahmed, 19, lives in the nearby Riverside Plaza apartment complex. He said he woke at 8 a.m. to the smell of smoke and when he looked out his window, he saw fire spewing out of the top of the building below.

Some people jumped out of the burning building to safety, he said. In nearly 5 years living in the area, Ahmed said, he’s never seen something like Wednesday’s scene. He called it “heartbreaking.”

Mohamed Jama, a Riverside Plaza resident and general director of the Cedar-Riverside Youth Council, said the grocery store is owned by a “very well-respected family” and is popular among locals.

“That was an asset to the community,” he said.

Farah Ahmed, who spoke at the press conference, said his uncle and brother co-own the grocery store. Farah Ahmed said he’s received calls from across the United States about the loss of the store.

“This was not only a business,” he said. “This was a gathering community center.”

Meghan Holden contributed to this report.