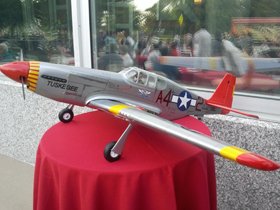 (Photo by Cathy Rajtar) A replica of the actual P-51C Mustang airplane flown by the Tuskegee Red Tail 332nd Fighter Pilots. The actual P-51C is housed at the South St. Paul Airport (when it is not in flight shows) and is available for viewing.

Minnesota Gov. Mark Dayton, who was unable to attend the July 16 reception, also passed along a proclamation declaring July 16, 2014, as Tuskegee Airmen Day.

“We’re here to honor a particular group of people of African-American descent who fought for the freedom of this country,” said MnDOT commissioner, Charles Zelle. “The Civil Rights Act didn’t just happen, and over the last 50 years we’ve continued to expand on that legacy.”

The Commemorative Air Force Red Tail Squadron event featured its Rise Above Traveling Exhibit on the capitol grounds and featured a short film displayed on a 160-degree panoramic mobile movie theater. The exhibit was created in hopes of educating audiences by sharing the inspiring legacy of the Tuskegee Airmen. The exhibit was designed to tell the story of how America’s first Black military pilots and their support personnel triumphed over the adversity of legal racism can inspire people of all ages to rise above any obstacle.

The Tuskegee Airmen program was the United States Army Air Corps’ program to train African-Americans to fly and maintain combat aircraft during World War II. It included 996 pilots and more than other 15,000 Black men and women who supported them in roles such as navigators, bombardiers, maintenance and support staff, and instructors. The planes were painted with a signature red tail to distinguish them from the rest of the fleet. It is also the reason Brown, a prisoner of war, says that he always wears the color red on special occasions. 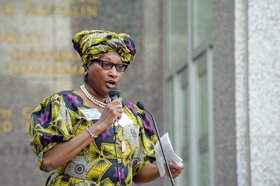 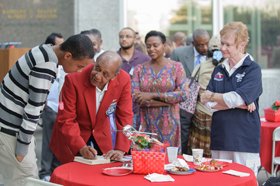 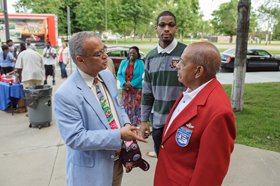 Eight of the Tuskegee Airmen pilots called Minnesota home. Unfortunately, all are deceased with the exception of Brown. Kenneth Wofford, one of the other Tuskegee pilots from Minnesotan, was inducted Minnesota Aviation Hall of Fame in 1999 and had once been the director of MnDOT aeronautics.

In the mid-1990s, volunteer members of the Commemorative Air Force Red Tail Squadron were able to successfully restore a P-51C Mustang to flying condition. The rare airplane has a bright red tail that mirrors how the Tuskegee Airmen’s squadrons painted their aircraft during World War II. Together with the mobile theater, they make up the Rise Above Traveling Exhibit. The airplane had to be rebuilt in the mid-2000s after a tragic crash that took the life of the pilot, the founder of the project Don Hinz.

Brown, who was involved with the Commemorative Air Force Red Tail Squadron since its founding, is very happy with how the traveling documentary turned out. 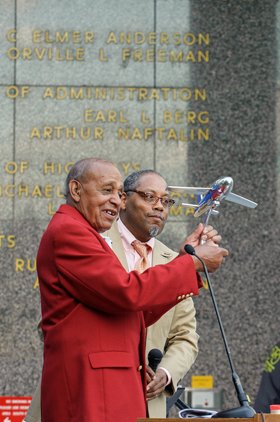 “Rise Above is a wonderful exhibit,” said Brown. “And (it) represents exactly what Don Hinz would have wanted.”

Also present to honor Brown was Mamie Singleton, executive director of the Youth Initiative Aviation Academy (YIAA), a program conducted by the Youth Initiative Mentoring Academies. The non-profit organization develops specially focused academies for at-risk youth to increase their confidence through engagement in educational and leadership training. YIAA is a rigorous program consisting of hands-on flight training and learning about career options in aviation with an adult mentor.