Easter and Passover occurred on the same weekend this year, resulting in the first spate of national overeating since Christmas and Chanukah coincided last December. There’s not a lot of crossover between what foods are eaten by whom, however — no ham on the Passover table, for example, and no matzohs for Easter. Some tolerant, secular foods appear on the festive tables of both Christians and Jews, such as eggs, potatoes, lamb, and chocolate. Well, not “such as” — that’s it, really. Maybe salad.

The most wonderful, in my opinion, of all the traditional foods of both religions (not counting Brach’s Bunny Basket Marshmallow Eggs — so good) is knaidel soup. This isn’t what it’s usually called: it’s usually called “matzoh ball” soup. Once Bruce (in an attempt to impress me with his multicultural knowledge) asked for knaidel soup at the Lincoln Del (of blessed memory), and the waitress said, “Huh? Baseball soup?” Apparently there weren’t many old-world Ashkenazis to hire as waitresses. 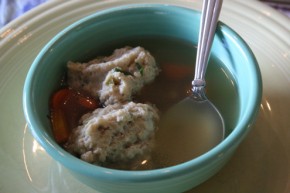 No matter what religious traditions you like to eat, I recommend that you make some knaidel soup. It’s useful (in addition to its usefulness at Passover, when it signals the first part of the meal after you’ve sat there reading about the story of Exodus for about two hours while eating only a matzo and some horseradish — see Wikipedia for more information about the Passover seder service, and yes, it’s weird, but don’t tell me there are any holiday traditions that are less weird: Easter bunny? — come on) whenever you’re feeling hungry and/or sick and/or (in the case of Jews) nostalgic and/or (in the case of Christians and other non-Jews) adventurous.

4 eggs
1 C. matzo meal (which you can get in the “ethnic” section of the grocery store)
1/2 tsp salt
2 tbsp vegetable oil (or schmaltz, but who has schmaltz sitting around in their kitchen anymore?) 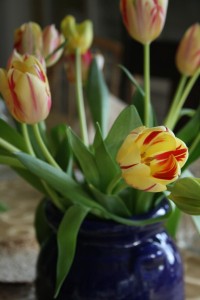 Add salt to eggs and beat with electric mixer till light and foamy. Fold in matzo meal 1 tbsp at a time till slightly thick. Fold in oil; let stand from 1/2 hour – 1 hour in refrigerator. Drop from a spoon into boiling salted water. Cover and simmer 1/2 hour. Turn off heat and let stand 1/2 hour.

Makes about 30 canadles. This will not be enough, so double the recipe, or why not just triple it? You can always freeze some. Keep them in the salt water until you’re ready to serve them, then spoon them into the broth. Do not accidentally serve the salt water as the broth. Not that this has ever happened.