Former Somali prime minister, Mohamed Abdullahi Mohamed spoke September 2 at an event at the Minneapolis Convention Center. The event was aimed to raise funds and awareness for the victims of the devastating famine in Somalia.

In his first visit to Minneapolis, Mohamed told a crowd of about 200 people that the famine has been on going for almost two years and that the world never paid attention until this summer, after more than 30,000 people starved to death.

Three months after he was appointed in October as the prime minister of the Somali’s transitional government, “I met officials in New York and told them to tackle the famine,” Mohamed said in Somali language. “My warning was ignored, and as a consequence, thousands of lives were lost.”

The United Nations reported tens of thousands of people who have died due to the drought, the worst in Somali in 60 years, according to news reporters. The report estimates 640,000 Somali children are acutely malnourished. 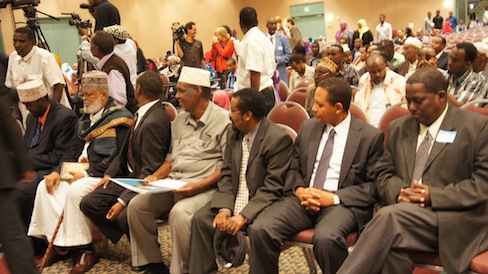 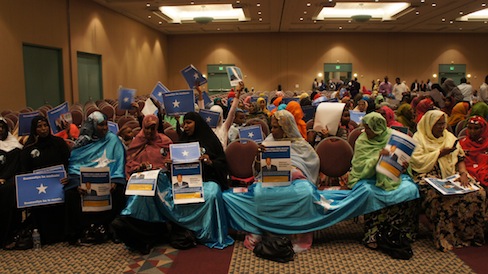 Mohamed told the crowd that the prolonged Somali civil war is the main cause of the famine.

Mohamed, who is also known by his nickname “Farmajo,” encouraged the Minnesota Somali-Americans to unite and disparage the clan difference.

“You have to know that clan system doesn’t work in this country,” Farmajo reminded the Somali community in Minnesota. “Find the best people among you and ask that person to lead you.”

Since early June, many events that raised tens of thousands of dollars to provide aid to the famine victims have being taking place in Minneapolis.

Hanad Guled, 21-year-old University of Minnesota student, said he wanted to see the prime minister and to help the people who are suffering in Somali.

“And these people really need a lot of help. If you have the means and the opportunities to help somebody, why not do it,” said Guled, who lived in a refugee camp in Kenya, Kakuma, just five years ago. “I know how it feels to starve and to not have food.”

“It hurts my heart to see it and to know about it,” Adam Alamin said of the famine. “I think there isn’t anything more important than helping these people today.”

Farmajo served as the Somali prime minister for eight months before he was forced to resign in June. Currently, he lives in Buffalo, N.Y., and worked for the state’s department of transportation.