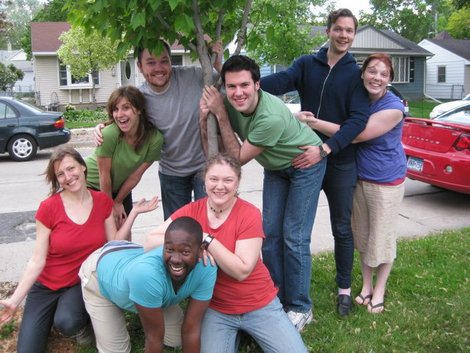 The ensemble of Ex-Gays (a.k.a. the staff of Camp Str8-N-Arrow). Photo courtesy Savage Umbrella.

I have to be honest. Just the idea of this play makes me nervous.

“For the past 35 years, Camp Str8-N-Arrow has been using proven scientific methods researched at the world’s leading Christian universities to guide God’s disciples from unwanted homosexuality. Our campers learn concrete lessons on how to be heterosexual, how to avoid same-sex temptation, and ultimately, how to let God’s love come inside them.”

I get it. It’s a joke. And it’s not a joke. It’s satire. It’s a campy way of portraying a camp where people go because they want a find a way to stop being gay.

It’s Ex-Gays, the latest offering from Savage Umbrella. And as anyone who’s been following my theater blogging for the last few years knows, I love me some Savage Umbrella.

In fact, if it weren’t for the artists of Savage Umbrella, I probably wouldn’t have gone near a production like this even if you paid me. There are so very many ways to do it wrong. While I understand that laughing at, rather than with, the subject of satire is the entire point, the notion of either laughing at gay people who are suffering, or laughing at people of faith, makes me extremely uncomfortable. Add to this the promised terror of audience participation and, well, I’m already on the verge of bolting before I cross the threshold of the performance space.

But how could you not produce a new work like Ex-Gays right now? The draw must be irresistible. With presidential candidate Michele Bachmann’s husband under scrutiny due to reports that his clinic practices therapy to “cure” gays, Mrs. Bachmann herself having built a career relying on anti-gay crusading, and of course, our own state’s insistence on bringing certain imaginary gay civil rights to a public vote, a production like this has the benefit of a highly charged environment in which to play. The old saying could not be more apt that the people of the future will not ask why something bad occurred or the politicians did nothing, they will ask why the artists were silent. It starts to feel like you have a duty to tackle a tricky subject like this. But how do you do it?

I think you have to do it almost exactly the way Savage Umbrella is doing it with Ex-Gays. I’m sure when director Laura Leffler-McCabe and writer Eric F. Avery were conceiving this production together, with input from the ensemble, they must have tilted things darker at one point, tilted things in a more comedic direction at another juncture. The end result is striking a very tricky balance that, on the whole, is successful. Just how tricky must have become apparent when they posted a fake website for Camp Str8-N-Arrow as part of their publicity campaign. The first time I visited the site, I don’t recall any footnotes. But now when one visits Camp Str8-N-Arrow’s online home, there is a note at the bottom of every page stating…

“Special Note: Camp Str8-N-Arrow is camp in the way that Richard Simmons is camp. www.SavageUmbrella.org”

Either the theater company was concerned someone might take the site literally, or someone actually did.

The audience for Ex-Gays arrives at the home of Camp Str8-N-Arrow, the Matthews Park Recreation Center at 2313 29th Avenue South in Minneapolis, and are checked in not as if it was a box office, but registration for camp. Everyone is smiling and earnest and perhaps just a little too friendly and excited to have us here. They are also wearing brightly colored T-shirts with the hilariously inappropriate camp logo: with a cross and a heart that can easily be mistaken for opposite sex genitalia joining together to do what they do.

Even though I know a couple of the actors, when Pastor Brian (Carl Atiya Swanson) walked up and shook my hand and said, “I can tell by the smile on your face that you’re ready to let God drive those homosexual urges right out of your heart,” I was pretty much ready to leave. For some peculiar reason, depictions of zombies and friendly Christian fundamentalists are two of the only things that seriously creep me out. I have such a low pain threshold where those things are concerned that the friend who accompanied me to this show kept leaning over and asking, “Are you all right?” When my friend left me alone before the show to make a quick trip to the men’s room, Pastor Brian wandered by again and noted, “It’s good that you’re waiting outside. We’d frown on the two of you being in there at the same time.”

Imagine my relief when it turns out that the most strenuous audience participation involves being checked in and getting to the performance space (which doubles in real life as a cafeteria/meeting area). The camp staff address the audience directly throughout. The lights are up. Occasionally they will sit with you if they’re not in a scene. But for the most part, the camp experience is the staff making presentations to the campers. The remaining moments of audience participation scattered throughout the evening are mostly innocuous hand gestures, coloring, submitting questions on cards, and minor sing-alongs. (Side Note: I continue to find it fascinating that Bonnie Tyler’s “Total Eclipse of the Heart” remains such an effective go-to song for spoofing. This version just keeps getting more out there with each passing lyric, including such gems as “soon you’ll be as straight as a priest.”)

“So many people afflicted with same-sex attractions are hungry for God’s love. They see His bounty before them like a delicious buffet, but they don’t know how to take His grace into their mouths and swallow.”

Pastor Brian (Swanson) has had the mantle of camp leadership passed to him because Pastor Jimmy (who we never meet but is portrayed online by writer Avery) needs a leave of absence to work through some personal issues. Given Pastor Jimmy’s bio, I’m not surprised…

“As all of the young people he’s touched over the years can attest, Pastor Jimmy has a particular gift with youth ministry and getting behind the youngest and most vulnerable of God’s flock.”

He’s the one in the group photograph on all fours. ‘Nuf said.

Pastor Brian (an ex-gay himself) is assisted by his lovely wife, music director Patsy (Amber Davis). (Yes, her name is Patsy.) Pastor Brian also has the eager assistance of young ex-gay intern Ricky (Russ Dugger), who Brian counsels through Ricky’s struggles with same-sex urges. And we all see where this is going…

Associate Pastor Kim (Sheila Regan) has more masculine swagger than Pastor Brian and Ricky combined. Kim has caught the eye of Camp Psychologist Peter (Tanner Curl), who, along with Patsy, seems like the only other comfortably heterosexual person in camp. But Kim has also caught the eye of art instructor Virginia (Rachel Nelson), who…well, we all see where this is going…

“It is up to all of us to choose to accept Christ as our Savior and take His love deep inside ourselves.”

Completing the camp staff are:

Intern Harper (Shira Levenson): an aggressively perky young heterosexual Christian with an equally aggressive crush on fellow intern Ricky (and we can all see where this is going…)

Silent Camp technicians Pam and Sam (Christina Lein & Hannah Holman), both with the grim look of two lesbians suffering these fools simply for the sake of a paycheck, but not actively participating.

“Last year, she helped start the camp’s initiative, ‘Sheaths of God’s Love,’ where campers covered themselves in long knit tubes of yarn, symbolizing what it felt to be inside God and feel his warmth all over you!”

Ex-Gays is a well-constructed, adroitly paced evening of theater. The whole arc of the camp experience is laid out before the audience as they arrive in a series of construction paper signs clipped to a clothesline strung across the front of the space. A handful of signs are assigned to each week of camp, delivering their own little visual jokes: Jump Rope for Jesus, Straight Pride Parade, etc. As one scene blends into the next, a staffer will remove a sign without drawing attention to themselves. And so we move swiftly through the Camp Str8-N-Arrow experience without needing to trouble ourselves with clunky exposition.

Standard classes and activities recur, each time with a new spin as relationships between the staffers either evolve or unravel. The final edition of Question Corner, where campers can submit questions to be answered by staff is a great example. Kim and Virginia face off against each other with amusingly tortured hypothetical questions and barely concealed subtext, struggling to understand what they mean to each other. Given the fairly orgasmic time they shared together frosting a cake in home ec class earlier, the audience is way ahead of them (but not in a bad way).

The only place this fine production stumbles just a bit is in not fully exploiting both sides of the story’s dramatic potential. Clearly, the sympathy of the artists and the audience is with those characters grappling with their sexuality. Christian fundamentalists aren’t this show’s audience. But we could learn more about them. There are three heterosexuals in the mix here: Brian’s wife Patsy, psychologist Peter, and intern Harper. While it’s clear that Peter and Harper are more inclined to respond with condemnation, the further we get into the story, the less and less we see of Patsy.

The fallout from Brian and Ricky’s intense friendship affects Patsy most of all, and yet we never get to spend time with her. She joins a chorus of disapproval (that might all just be in Brian’s head anyway), but we never see her again in any significant way. This is a woman who knew the man she loved was struggling with his attraction to other men and married him anyway. A woman who either learned to live with a seemingly bottomless capacity for denial, or knew exactly what was going on and learned to make her peace with it. This is a woman who was practicing exactly the kind of acceptance and forgiveness in such short supply in some denominations today. Patsy appears to have genuine compassion for her fellow human beings, and is more about lifting them up than fixing them.

Maybe the production just couldn’t find a way to really get inside the head and heart of this brand of Christianity. But it might have been a much more funny, painful and moving play if they had. Ex-Gays is already funny, painful, and moving. But when a show is this good, and the artists are this gifted, you can’t help wondering, just a little, about the play that might have been.

Savage Umbrella just picked up a last-minute opening on the Minnesota Fringe Festival schedule (August 4 through 14, 2011) and will be doing a truncated version you can catch over at Intermedia Arts. So the play will continue to evolve. I’m glad. Because it’s a conversation—in both comedy and drama—that we’ll all be better off continuing to have. Highly recommended.