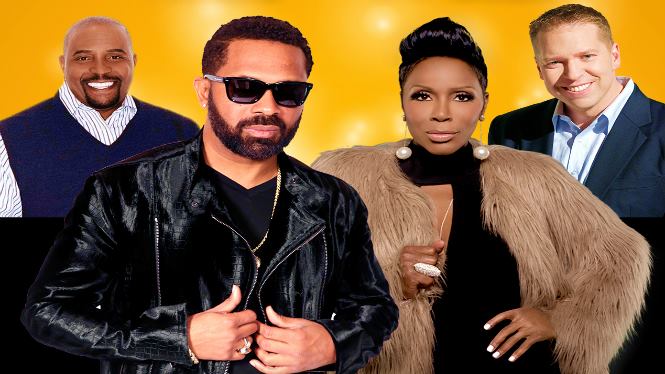 About Mike Epps
Comedian and actor Mike Epps has generated quite a buzz among his peers and within the industry for being one of the funniest comedic actors emerging in the Hollywood spotlight. Mike is currently on his own national comedy tour, Mike Epps: Don’t Take It Personal which is selling out major concert venues across the country. It was recently announced that Epps would play legendary comedian Richard Pryor in the star studded biopic set to film in 2016. “I don’t feel pressure from the audience necessarily, I feel pressure for myself to do right for Richard himself.” Epps can also be seen in the widely popular comedies Next Friday, How High, Dr. Doolittle 2, Survivors Remorse and the highly anticipated ABC show Uncle Buck.

About Sommore
The Trenton, New Jersey native has appeared various shows including Russell Simmons’ Def Comedy Jam, BET’s Live From LA, Showtime At The Apollo and featured on The Oprah Winfrey Show. Sommore received the prestigious Richard Pryor Award for “Comic Of The Year.” Starring in the ground-breaking Queens of Comedy tour, Sommore was featured on the Showtime special and now has her own successful DVD The Queen Stands Alone. Her film appearances include Soul Plane, A Miami Tail, Friday After Next and Something New. Other noteworthy accomplishments include several appearances on the sitcoms The Hughley’s, The Parkers, and Politically Incorrect with Bill Maher. She most recently filmed a comedy special called Chandelier Status.

About Gary Owen
Remarkably, Owen starred in three Showtime specials all in the same year; his one-hour comedy special True Story was an instant hit and is now a best-selling DVD; he commanded the stage as host of Shaquille O’Neal Presents: All Star Comedy Jam – Live from Orlando and he was a stand-out performer on “Mike Epps Presents: Live From Club Nokia.”
Owen had a recurring role as Zach the barber on Tyler Perry’s successful television series House of Payne. Perry met Owen on the Tom Joyner Morning Show (Owen is a regular on the radio show) and immediately knew he wanted to work with him and wrote him into the show. On the big screen, Owen appeared in the films Little Man with The Wayans Brothers and Daddy Day Care with Eddie Murphy. He is also recognized around the country for his scene stealing role as “Bearcat” in the MGM film College.

About Don “DC” Curry
Don “DC” Curry is the most widely recognized for his comedic acting role as the zany Uncle Elroy on the hit urban classics, Next Friday and Friday After Next. His credits also include a recurring role on the Aaron McGruder sitcom, Black Jesus and guest appearances on: The Boondocks, Everybody Hates Chris, The Steve Harvey Show, The Chris Rock Show, HBO Def Comedy Jam, Martin Lawrence’s 1st Amendment Stand Up, Comics Unleashed, Comics Unleashed Hot Chocolate, TV One’s Way Black When, host of BET Comic View, his own Comedy Central Special, his own BET Special, a series regular role on ABC’s Grace Under Fire, and the winner of the Bay Area Black Comedy Competition.