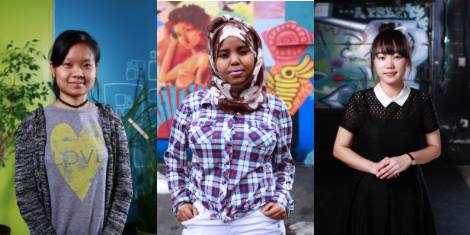 ​In 2017 Green Card Voices met with 30 immigrant students from St. Paul’s LEAP High School and began a process which would turn them into published authors. They were supported by their English Language Learning teacher and Hamline University graduate students. These 30 students, from 13 different countries, created online video narratives and written published essays which were included in a book published in the summer of 2017. Come, meet, and listen to three of these authors:​

Jae Nay Htoo– (Thailand-Karen) “When I was in the refugee camps, there were no surprises in my life. It was just a simple life. But when I here, many surprises happened to me, and there were many challenges that I had to face

Nima Ahmed– (Djibouti) “When I was sixteen, my parents kicked me out because they found out that I was gay. After I moved out, I lived in a shelter for several months. I felt lonely and isolated because I have never experienced life alone.”

Free and open to all
​East Side Freedom Library, 1105 Greenbrier Street
info@eastsidefreedomlibrary.org and 651-230-3294​