Steve Grove, Commissioner of DEED: Empowering the growth of the Minnesota economy, for everyone

13jan11:45 am1:00 pmSteve Grove, Commissioner of DEED: Empowering the growth of the Minnesota economy, for everyone 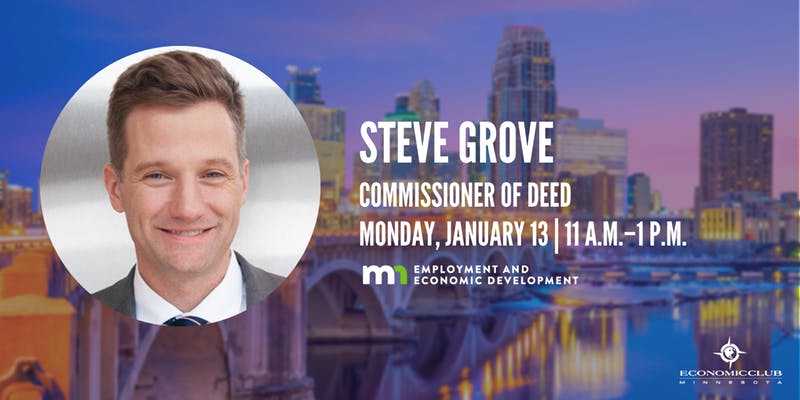 As commissioner of the state’s principal workforce and economic development agency, Commissioner Grove brings a wealth of private sector and civic experience

As commissioner of the state’s principal workforce and economic development agency, Commissioner Grove brings a wealth of private sector and civic experience to the Department of Employment and Economic Development. Originally from Northfield, Minnesota, Commissioner Grove is focused on growing the state’s workforce, closing the opportunity gap and providing businesses with the help they need to grow, stay and thrive.

Commissioner Grove was previously an executive at Google for 12 years, most recently serving as the founding director of Google’s News Lab, a global division of the company that partners with media companies and startups to drive innovation in the news industry. He has built teams in over a dozen countries and launched partnerships in over 50 countries, including a global technology training effort that trained over 500,000 people every year. Grove also led Google’s civic engagement work, including the company’s non-partisan voter information and get-out-the-vote outreach efforts. He previously led YouTube’s first news and politics team, building a global partnership effort for political candidates, news organizations, nonprofits, and citizen journalists. The divisions of Google that Grove led during his career addressed a wide range of public challenges with new solutions: from fighting online disinformation campaigns, to growing social media citizen engagement with world leaders, to a developing a broad range of voter turnout initiatives.

Grove wrote for The Boston Globe and ABC News prior to joining Google. He has served as an advisor to the White House and State Department on counter-terrorism strategy, and serves on the advisory boards of Witness, a video human rights nonprofit, and Report for America, a nationwide service organization to improve local news.

Commissioner Grove holds a master’s in public policy from the Harvard Kennedy School and a B.A. in philosophy, politics, and economics from Claremont McKenna College. He is an International Security Fellow at the New America Foundation, and co-founded a nonprofit with his wife Mary called Silicon North Stars, which helps youth from underserved communities in Minnesota pursue careers in technology. In 2018, the Groves moved from Silicon Valley to Minneapolis, Minnesota with their two-year-old twins.

As part of registering for this event, I voluntarily grant the Economic Club of Minnesota (“ECOM”) the worldwide, perpetual, nonexclusive right and license to use my name, voice, signature, photograph, image, likeness, distinctive appearance, gestures, and mannerisms (“Right of Publicity”) in connection with ECOM’s advertising, marketing, promotions, educational and/or other activities, in print, electronic, and digital format, and in any other medium or format now known or that may become known in the future. I acknowledge that all copyright and any related intellectual property rights in and to any recordings of my Right of Publicity will be owned by ECOM. I irrevocably and unconditionally release ECOM and its related entities, agents and successors from all right or claim related to or arising from such use of my Right of Publicity, including, but not limited to, claims under right of publicity, right of privacy, copyright, and other laws. I represent and warrant to ECOM that I have not previously made any contract or commitment in conflict with this release and waiver. I acknowledge that ECOM is not required to make use of my Right of Publicity, and may do so in its sole discretion.