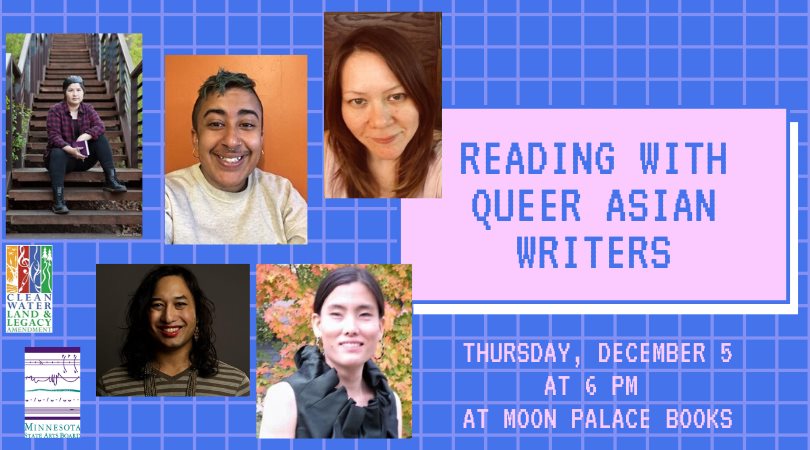 Please join us for an evening of readings by local QUEER ASIAN WRITERS at 6 pm on Thursday, December 5. Food and beverages are available at Geek Love Cafe during events

Please join us for an evening of readings by local QUEER ASIAN WRITERS at 6 pm on Thursday, December 5.

Food and beverages are available at Geek Love Cafe during events – including scratch-made sourdough pizza, hearty salads, baked goods, coffee, tea and espresso drinks, beer and wine. Check out the menu at www.geeklovecafe.com

MERLE GEODE is a queer, non-binary multiracial Korean-American poet, shamanic practitioner, and self-taught multidisciplinary artist who is a first MFA candidate in poetry. They have an undergraduate degree in zoology and they have moved in the world as a food and features writer, freelance editor, professional dog groomer, cook and baker. They are a former University of Wisconsin Writing Fellow and Mirrors & Windows Fellow at the Loft Literary Center, and their work has appeared in Isthmus and Our Lives Magazine in Madison, WI; Twin Cities Pride Magazine, Twin Cities Daily Planet, and the anthology, Love Always: Partners of Trans People on Intimacy, Challenge and Resilience.

SELENA MOON is a Japanese-American who grew up in the US and Japan. She received her BA in history from Smith College and her MA in history and Public History Certificate from the University of Massachusetts Amherst. She has been researching and writing about Japanese-American mixed-race and disability history for several years. She works as a fact-checker and writer for the Minnesota Women’s Press and as a contract researcher.

NICOLA KOH is a Malaysian Eurasian a baker’s dozen of years in the American Midwest, an atheist with two masters of theology from a Calvinist seminary, and a minor god of Tetris. They got an MFA at Hamline University, in Saint Paul, where they currently live and vex everyone with their love of the gloriously long winters. They were a 2018 VONA/Voices fellow and are currently a participant in the Loft Mentor Series. Their work has appeared in Crab Orchard Review, Southwest Review, Sweet: A Literary Confection, and others.

MIMI IIMURO VAN AUSDALL* is a Minneapolis-based writer and teacher. Her creative and scholarly work appears in MUTHA Magazine, The Journal of Lesbian Studies, and Feminist Formations, among others. She has been the recipient of the National Women’s Studies Association Graduate Scholarship in Lesbian Studies, an Artist Initiative grant through the Minnesota State Arts Board, and has been a Loft Mentor Series fellow. She is working on a book of personal essays entitled ALMOSTS: Essays from an Almost Lesbian, Almost Asian, Almost Blind, Almost Mom and a novel featuring queer youth in an Arizona-based Japanese Internment camp.