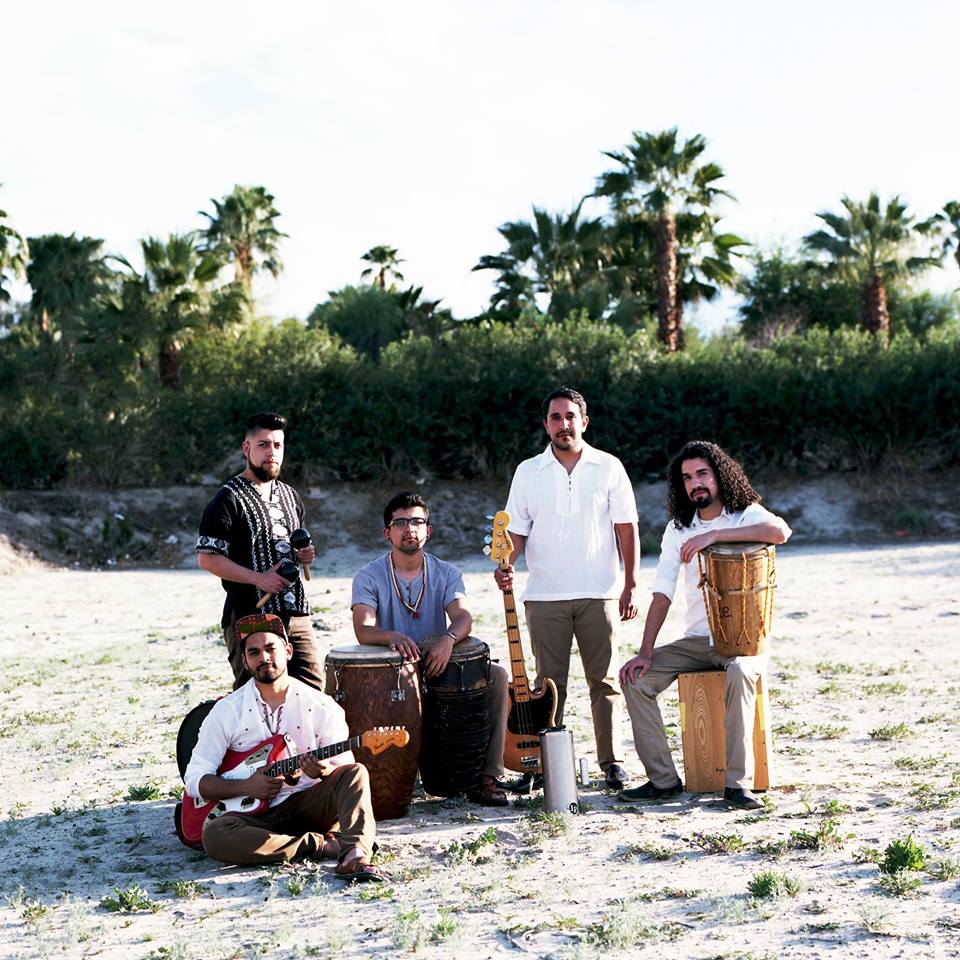 QUITAPENAS, one word – all caps, four syllables – all claps, gives you a taste of their rhythmic contagion. This tropical Afro-Latin combo was born under the warm California sun in 2011. They borrow aesthetics from the radical 60s, 70s and 80s. Each song echoes a remix of history and invites one to engage in the liberating evenings of Angola, Peru, Colombia, Brazil and beyond. The name means “to remove worries.” Everybody has a “pena” and the mission of QUITAPENAS is simple: to make you dance and leave you worriless.

ABOUT DJ DON CUCO:
Rico Simon Mendez aka Dj Don Cuco has been known to have the natural touch at blending the harmony of sound and spirit, and materializing it into a musical movement. A soul revolution. He purchased his first electric guitar at age 7, and with Prince and Santana as his inspirations, he leaped head first into the dance of music. A constant evolving process, Rico has studied percussion, flute, bass and keys, and various electronic devices, focusing on indigenous sounds, Latin and African rhythms, world beats and healing frequencies. Humbly sharing stages and performing along side of artists such as Ozomatli, Natasha Beddingfield, ?uestlove, K-OS, Ursula Rucker, Bobbito Garcia, Atmosphere and many more, Rico has played both nationally and internationally with many bands and artists.

Proudly still spinning an eclectic collection of vinyl, Dj Don Cuco has wowed dance floors, lounges, radio, corporate events, fashion shows and retail stores with his fusion of rare selections from scenes across the globe. Doing everything from creating soundscapes and music styling for clothing boutiques and upscale restaurants, to developing and hosting an on air, award winning radio show on MPR, he continues to build relationships, bridging the gap with music and touching the world.
As a composer, Rico works with various artists, dancers and has written for commercials, web, TV & film. Currently residing in Brooklyn NY, he was recently certified in Sound and Vibration healing, works at a Dubspot, a DJ and production school, and is currently working on his own production company and record label, Cultura Love.

Cultura Love’s aim is to work in communities with youth who don’t have an outlet to express themselves creatively and also to raise funds through art based events and music for educational programming and communities of disaster and economic crisis.

ABOUT DJ MIGUEL VARGAS:
Born and raised in St. Paul, MN, Miguel Vargas began DJing out of South Minneapolis in 2006 spinning Soul, Funk, Hip-Hop, & House, and joined forces shortly after with DJ Ren (Steven Renderos) and the expanded their styles to include Cumbia, Salsa, Samba, and other tropical rhythms. They debuted the music radio program, Radio Pocho, on KFAI – 90.3 FM Minneapolis – 106.7 FM St. Paul in 2010. Since then, Vargas has been working in radio for KFAI and American Public Media, and produces Pochanga, a quarterly alternative Latin@ concert series at the Bedlam Lowertown.

Radio Pocho is a program and an experience that navigates borders and musical influences of Latin@ peoples; reclaiming roots through musica. Classic to Contemporary, Radio Pocho can be heard on Wednesday nights, 8-10pm on KFAI 90.3FM Minneapolis/106.7FM Saint Paul or online at kfai.org!