Not Your Token: Trans people of color voices in film and media 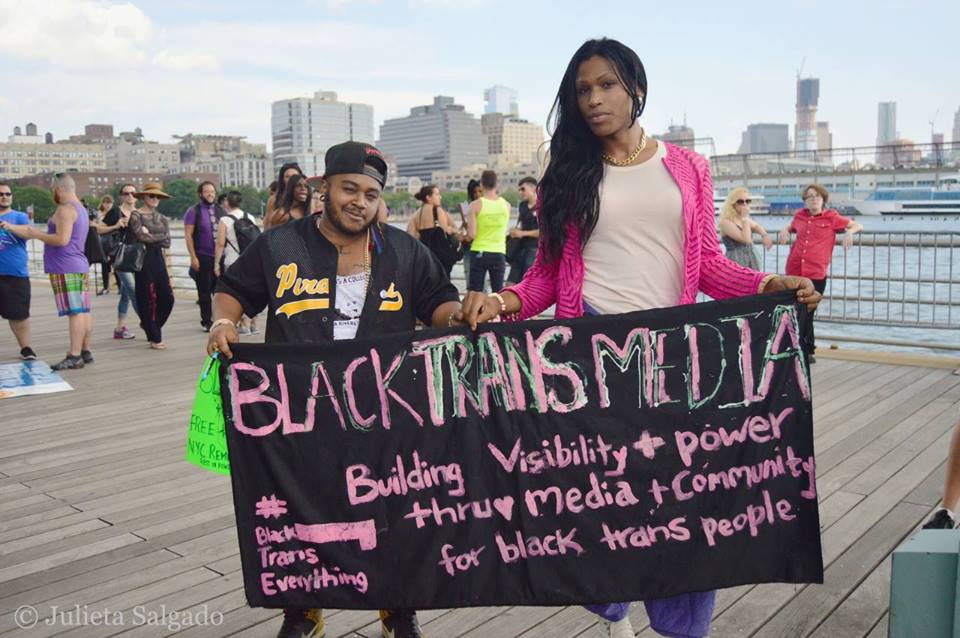 Gender Reel’s 3rd night of screenings focus on the lives, experiences and voices of trans people of color.

Additional PROGRAMMING DETAILS will be posted and announced as they develop.

Tickets are $5 a person, but no one will be turned away from attending if they cannot afford a ticket. If this is the case, please contact Joe @ gendereelfest@gmail.com and he will place you on the Will Call list. http://genderreel2017.bpt.me/

Black Trans Media is committed to building the power of black trans people, and our trans/communities of color. We work at the intersections of racial and gender justice confronting racism and transphobia in institutions and our everyday lives. Black Trans Media exist to shift and reframe the value and worth of black trans peoples by creating and supporting media that amplifies the black trans experience. We organize community based events around issues of injustice and liberation with black trans folks at the center of our work and leadership. Our projects and collaborations connect black trans people to each other, as well as the larger public, and sustainable opportunities to build, showcase, heal, and celebrate our lives.

Quinn a.k.a. SHIMMER (Host) – was born and raised in the Twin Cities area. Quinn dentifies as a Hispanic Woman of Color and a Transgender Woman. Quinn has definitely seen the struggles of being a Minority and faces the criticisms the LGBT Community & Transgender Women face in today’s Society; this has not stopped Quinn from following her dreams and straying her from succeeding in her passions. Most recently Quinn joined KFAI Radio as a Co-Host for FRESH FRUIT with RARE Productions. Quinn was featured in an article for City Pages International Women’s Day featuring her hard work, dedication, and representation for being a voice for the LGBT Community, a Queer Artist of Color & the Transgender Community. Quinn was chosen as one of 5 Influential Women in the Twin Cities.

Olympia (Special Guest) was born in Maryland, and raised in Bed-Stuy, Brooklyn. She is full time student, healer, artist, poet and an educator. She is a trans warrior who currently works in the public health field working to dismantle the failed ideologies that don’t serve her Trans community. She enjoys adventures with her husband Sasha ♥, she enjoys reading, writing and her time with yellow cats. She is the Content Director of Black Trans Media. Her preferred pronouns are Her-she like the chocolate bar.

Sasha (Special Guest) is a trans-racially adopted, mixed race black/south asian, queer, trans, educator, facilitator, multi-media artist, healer, and community organizer. Over the last 15 years Sasha has built and collaborated with local and national youth empowerment, social justice, and media organizations working for gender, economic, and racial justice. Sasha is the Founder of Black Trans Media, a project addressing the intersections of racism and transphobia by amplifying the narratives of black trans people, creating media for and by the black trans community. Sasha prefers the pronouns he/she/they and that you mix it up.

Over Stigmatized — Created by and for trans, gender non-conforming, non-binary and allies from GAP’s SupaFriends LGBTQ media program, this thriller tells the story of how Brave, a racial justice activist and filmmaker, responds to the loss of his ex-girlfriend Kelly, a trans justice organizer, and grapples with his own guilt about hiding their relationship. This film tackles the epidemic of transphobic violence and the silence around the murders of trans women. (Filmmaker: Giselle Bleuz, TRT: 22 min, 2016).

35 — Released on Trans Day of Remembrance 2016 “35” is a video original poem written and performed by Sasha Alexander and filmed and edited by Olympia Perez and Sasha Alexander. “35” is about the experience of being black and trans, in love and feeling the pressure of violence – it is specifically about the average life expectancy of black trans women reported in stats from violence over the past few years to be 35. The reality is the age is much younger for many of the sisters who have been killed and as young black trans people art is a tool we use for resistance and to reframe the value and worth of black trans peoples. (Filmmaker: Sasha Alexander, TRT: 3 min, 2017).

Rest In Power Juan Evans — Dedicated to Juan Evans family in love and remembrance of Juan and his work for justice, this recorded interview breaks down mass incarceration and TGNCI criminalization, his own experiences, and vision for all black trans people rest in power. (Filmmaker: Black Trans Media, TRT: 18 min, 2016).

Passing — This short film profiles the lives of three men of colour who have undergone gender transition from female to male. The film explores what life is like living as a black man when no one knows you are transgender and how each of them now, perceives their own journey with gender after many years of being interacted with by the world as a biological man. (Filmmaker: Lucah Rosenberg-Lee, TRT: 23 min, 2015).

Garden of Eden — Following an altercation with her father about her sexuality, 17-year old Jaliyah is forced into homelessness just neighborhoods away. Coming to terms with her sexuality, Jaliyah’s identity evolves as does her disdain for religion, society, and cultural norms. (Filmmakers: Imani Dennison, Robin Williams, TRT: 32 min, 2017).

Partial proceeds from the sale of tickets will be donated to the Minneasota Trans-Health Coalition.