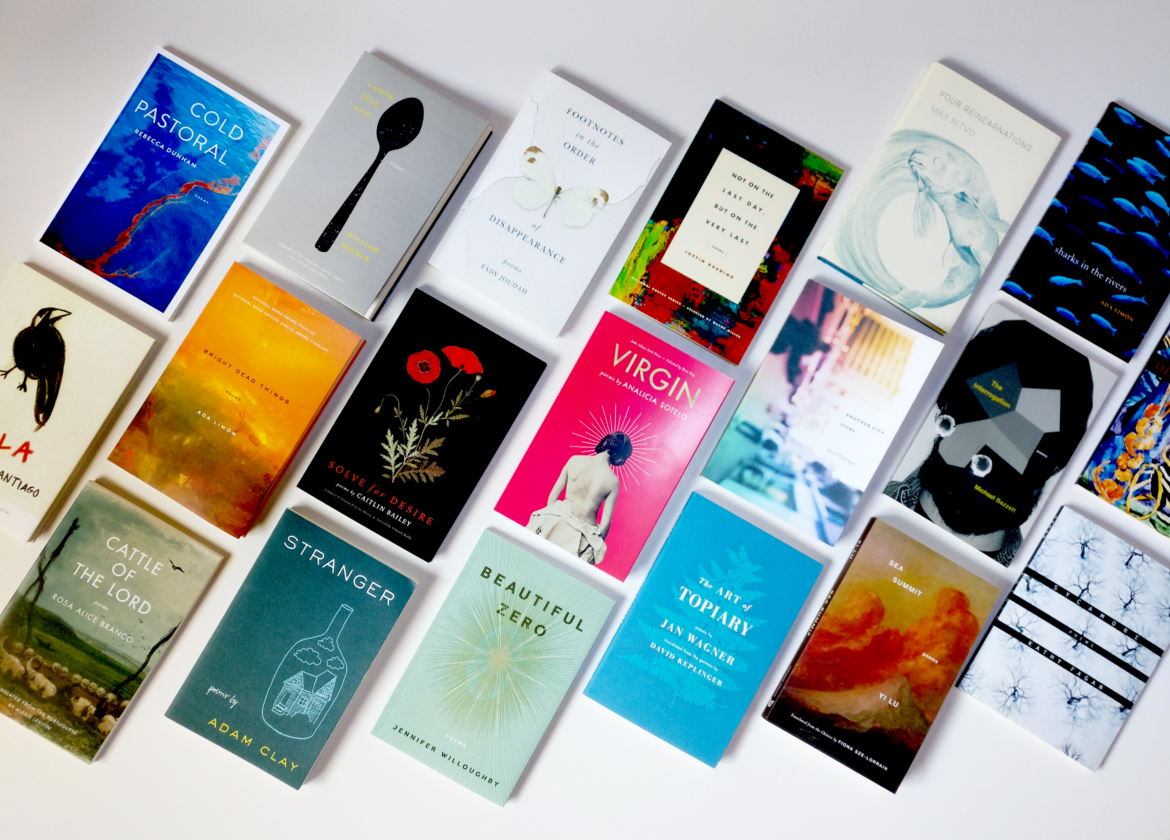 Celebrate National Poetry Month with Milkweed Editions! Join us for an evening honoring poets and the vitality of the local poetry community. 6:00 p.m. | Join poets and their many

Celebrate National Poetry Month with Milkweed Editions! Join us for an evening honoring poets and the vitality of the local poetry community.

6:00 p.m. | Join poets and their many fans for poetry-themed drinks and hors d’oeuvres!

7:00 p.m. | The party continues with a reading featuring the finalists* for this year’s $10,000 Lindquist & Vennum Prize for Poetry—the largest regional poetry prize. The finalists are:

Su Hwang, for BODEGA
Michael Torres, for HOMEBOYS WITH SLIPPED HALOS
Elizabeth Tannen, for NOTES ON DISTANCE
Angela Voras-Hills, for THE ACCOUNT OF WORMS
Claire Wahmanholm, for WILDER

BODEGA by Su Hwang
Su Hwang was awarded the 2018 Minnesota State Arts Board Artist Initiative Grant, the 2017 Minnesota Emerging Writers Grant from the Loft Literary Center, and the 2017 Coffee House Press In The Stacks Fellowship at Dickinson House in East Flanders, Belgium. Born in Seoul, South Korea, she called New York City and San Francisco home before transplanting to the Twin Cities to attend the University of Minnesota, where she received her MFA in Poetry. She is also the recipient of the Michael Dennis Browne Fellowship in Poetry and the Academy of American Poets James Wright Prize. She is a regional VONA alum, teaches creative writing with the Minnesota Prison Writers Workshop, and is the co-founder/co-director of Poetry Asylum with award-winning poet Sun Yung Shin. She currently lives in Minneapolis.

HOMEBOYS WITH SLIPPED HALOS by Michael Torres
Michael Torres was born and brought up in Pomona, California where he spent his adolescence as a graffiti artist. His work has appeared or is forthcoming in Ploughshares, The Sun, and Poetry Northwest, among others. He has received grants from the Minnesota State Arts Board and the Jerome Foundation. Torres is a VONA alum and a CantoMundo Fellow. Currently he teaches creative writing at Minnesota State University, Mankato and through the Minnesota Prison Writing Workshop.

NOTES ON DISTANCE by Elizabeth Tannen
Elizabeth Tannen is a Brooklyn native, South Minneapolis resident, teacher, activist and multigenre writer. She holds an MFA from the University of New Mexico in Creative Nonfiction and in 2016-2017 won a Loft Mentor Series Award and a Minnesota State Arts Board grant, both for poetry. If you ask what she’s most proud of, she’ll say the ongoing reading series she founded in 2015: Five Writers, Five Minutes, Five Watt, or 555. Her writing appears in places like Copper Nickel, Salon, Southern Humanities Review, and Passages North, as well as the blog she’s intermittently and often ambivalently written since 2009, Dating in the Odyssey Years. She spends much of her time seeking out conversations about dad jokes, community, and dismantling white supremacy.

THE ACCOUNT OF WORMS by Angela Voras-Hills
Angela Voras-Hills earned her MFA at UMass-Boston and has been awarded grants from The Sustainable Arts Foundation, Key West Literary Seminar, and was a fellow at Writers’ Room of Boston. Her work has appeared in Kenyon Review Online, Best New Poets, Memorious, and Hayden’s Ferry Review, among other journals and anthologies. She is Online Literary Arts Director at Arts + Literature Laboratory and lives with her family in Milwaukee, WI.

WILDER by Claire Wahmanholm
Claire Wahmanholm is the author of the chapbook Night Vision, which won the 2017 New Michigan Press/DIAGRAM chapbook contest. Her poems have most recently appeared in, or are forthcoming from, anthropoid, Paperbag, Saltfront, New Poetry from the Midwest 2017, PANK, Bennington Review, The Collapsar,Newfound, Bateau, DIAGRAM, elsewhere, Best New Poets 2015, Handsome, Tinderbox Poetry Journal, The Journal, The Kenyon Review Online, BOAAT, 32 Poems, and Waxwing, among others. Her debut full-length collection is forthcoming from Tinderbox Editions in early 2019. She lives and teaches in the Twin Cities.

TICKETS
PAY WHAT YOU CAN
All are welcome! No one will be turned away for lack of funds.(Suggested donation of $5 to help cover food & drinks.)

$25 TICKET PLUS A BOOK!
Your ticket will also serve as a voucher redeemable at the party for a collection of poems** of your choosing!

*Please note that this event does NOT factor into the selection of the prize winner. The winner is selected in a blind process by an impartial judge and will be announced by 4/30/18.

**Book vouchers are redeemable for titles published by Milkweed Editions only.