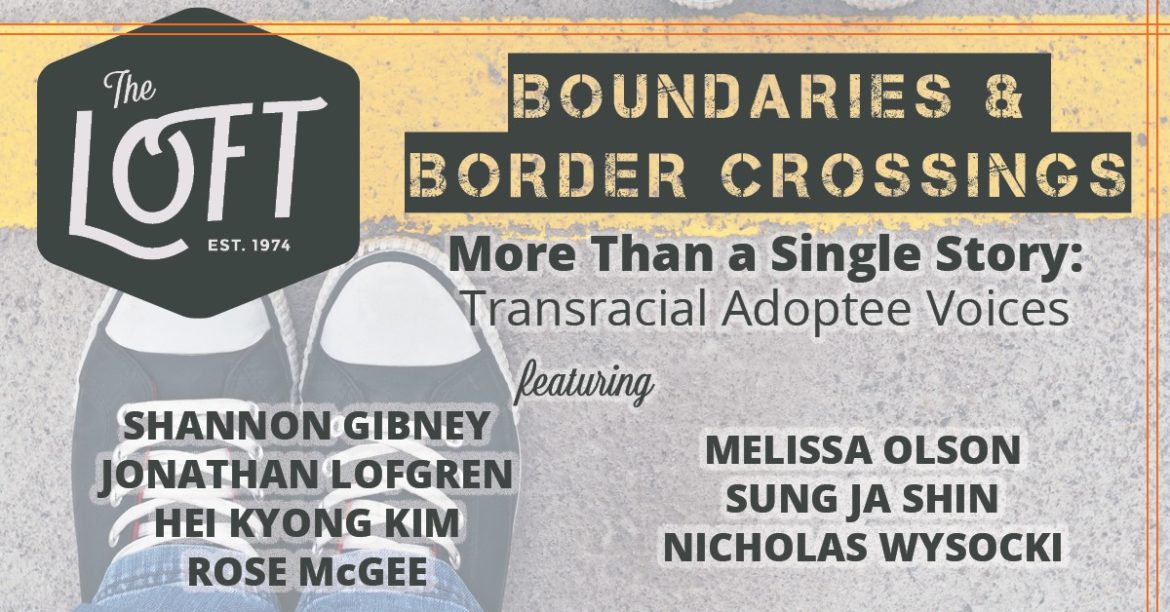 As part of the Loft's Boundaries and Border Crossings theme, this More Than a Single Story discussion will explore the histories of transracial and transnational adoption in their communities, including

As part of the Loft’s Boundaries and Border Crossings theme, this More Than a Single Story discussion will explore the histories of transracial and transnational adoption in their communities, including the complexities of identity that are inherent in growing up transracially, the wisdom and unique perspective these experiences give to them, and the power of story in forming their perspectives.

During this discussion, the speakers will talk to one another as if no one is in the room, and participants will have an opportunity to listen to a conversation they may not hear otherwise. This Circle Within a Circle format will be facilitated by Rose McGee. Following the conversation, audience members will have an opportunity to respond and engage in conversation with one another to deepen their understanding of transracial adoptees and deconstruct the stories that are told around adoption.

Pay-what-you-can at the door, as available.

Featured Artists:
SHANNON GIBNEY is a writer, educator, and activist. Her first novel, SEE NO COLOR, drawn from her life as a transracial adoptee, won a Minnesota Book Award, as did her second novel, DREAM COUNTRY, which chronicles five generations of a Liberian and Liberian American family. Gibney and writer Kao Kalia Yang co-edited the groundbreaking anthology WHAT GOD IS HONORED HERE?: WRITINGS ON MISCARRIAGE AND INFANT LOSS BY AND FOR NATIVE WOMEN AND WOMEN OF COLOR. She lives in Minneapolis with her children.

JONATHAN LOFGREN holds a PhD in Education, specializing in Training & Performance Improvement from Capella University. Jonathan is a Licensed Alcohol and Drug Counselor and a Co-occurring Disorders Professional – Diplomat. He is an active member of the International Motivational Interviewing Network of Trainers (MINT). He is biracial, and a transracial adoptee, a grandfather, father, husband, son, and grandson.

HEI KYONG KIM (aka BETH KYONG LO) was adopted from Seoul, South Korea in 1975. By day she works as a clinical psychologist and by night she writes creatively. Her first collection of poetry and prose, THE TRANSLATION OF HAN, was released in June 2014 by CQT Publishing and Media. Her additional work can be found in numerous journals and anthologies.

ROSE McGEE is a facilitator, author, and creator of Sweet Potato Comfort Pie: a catalyst for caring and building community. She is a recent Bush Fellow, a Minnesota 50 Over 50, was featured in the PBS documentary A Few Good Pie Places, and has a TEDx Talk titled “The Power of Pie.” She works as a Program Officer with Minnesota Humanities and is the author of Story Circle Stories; Kumbayah: The Juneteenth Story; and Sleep with a Virgin: A Perspective on AIDS. In 2021, Minnesota Historical Society Press will release her children’s book, CAN’T NOBODY MAKE A SWEET POTATO PIE LIKE OUR MAMA.

MELISSA OLSON (she/her/hers) makes her living as a writer and producer of independent public media. She is currently an editor for KFAI Radio’s MinneCulture Arts and Heritage program. Her award-winning audio documentary “Stolen Childhoods” was produced in collaboration with KFAI producer Ryan Katz and edited by Todd Melby, and aired statewide on Minnesota Public Radio and Prairie Public radio in 2017.

SUNG JA SHIN is a mother to two sons, working in nonprofit world as a program officer, facilitator, and evaluator. Sung Ja was born in Seoul, Korea and arrived in Minnesota during the height of Korean adoption.

NICKOLAS WYSOCKI is an Associate Professor in the Education Studies Department at Winona State University. He holds a PhD in the Social Foundations of Education from The University of Iowa, and he has worked in higher education for over 20 years.

About our Winter/Spring Theme, Boundaries and Bordercrossings:

There has been much debate on the transgression of geographical borders and the impact this has on communities and individuals. These conversations raise various questions about how we define boundaries, whether geographical, social, cultural, or psychological and what happens when these boundaries are broken.

The written word allows us to cross borders and to explore what’s on the other side. In fact, stories are an invitation to transgress the boundaries that constrain us in search of a new perspective and better understanding. Through this theme the Loft invites readers and writers to consider what defines a physical or emotional border and why they might choose to cross it.