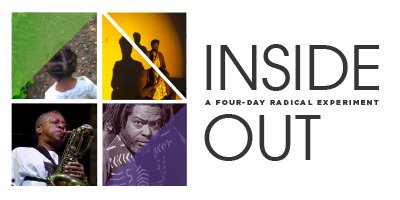 A multidisciplinary festival dubbed a “radical experiment” by the Intermedia Arts’ curator, the Inside / Out Festival seeks to test, redefine, and innovate the use of space, performative

A multidisciplinary festival dubbed a “radical experiment” by the Intermedia Arts’ curator, the Inside / Out Festival seeks to test, redefine, and innovate the use of space, performative technique and the role of the audience. To conduct this experiment, Twin Cities artists are invited to present film, performance, visual art, and musical work that pushes boundaries of space, genre, and artist-audience interaction. With a lineup featuring artists such as Eric F. Avery, J. Otis Powell, Davu Seru, Donald Washington, Ellen Hinchcliffe, and co-presenting organizations including RARE Productions and Tru Ruts, this four-day festival promises to engage audiences in new and exciting ways beyond the fourth (or even fifth) wall. See the full schedule here: http://intermediaarts.org/inside-out-festival

The Festival Includes:
CARRY THE STONES | An interactive visual art installation for grief and healing created by Ellen Hinchcliffe

P2P OUTTA THE PARK | Power to the People pop up exhibition and cabaret by Queer and Trans artists of color, co-presented with RARE Productions

THE (FABLED) LIFE AND (IMAGINARY) DEATH OF ERIC F. AVERY | An interactive performative journey, inviting the audience to share in the experiences, rituals, milestones, and moments that connect us. Created and performed by Eric F. Avery.

SANKOFA FILM FESTIVAL | Intermedia Arts is proud to present the short films portion of this city-wide festival featuring films that showcase narratives of the divergent and dynamic stories of Black life in the US and internationally. Co-presented by Tru Ruts In Partnership with IFP Minnesota, MN Film Society, and The Walker Art Center. Curated by E.G. Bailey and Shá Cage