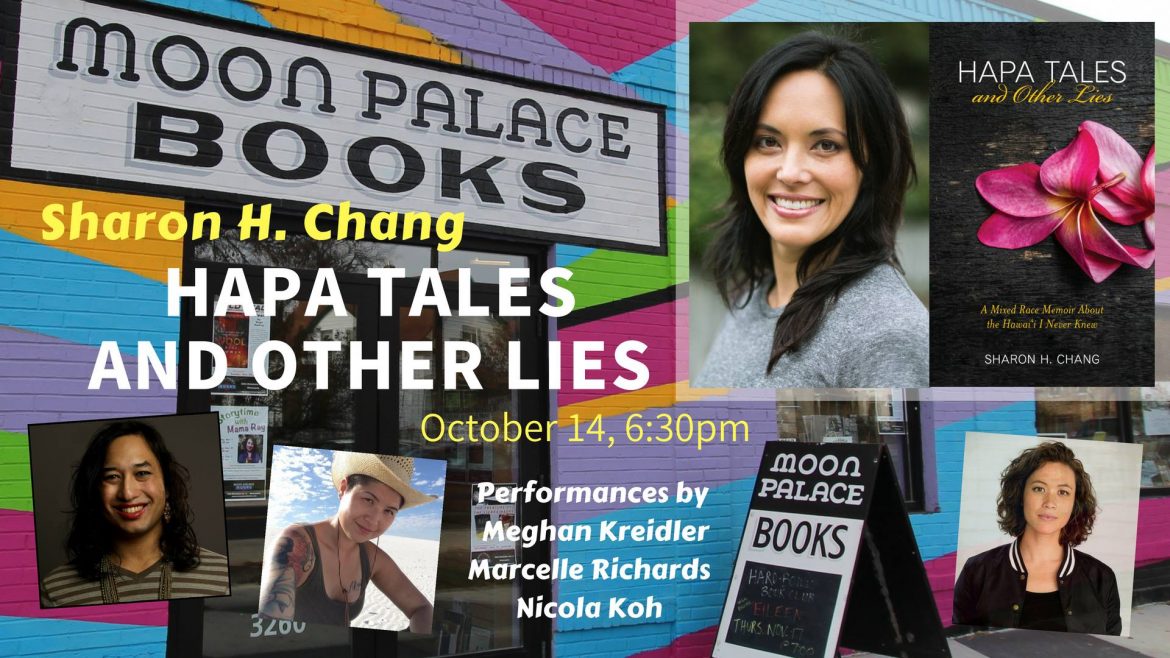 In her first work of literary nonfiction, Sharon H. Chang explores her Asian American and Mixed Race identity through the prism of returning to Hawai'i as a tourist. But what

In her first work of literary nonfiction, Sharon H. Chang explores her Asian American and Mixed Race identity through the prism of returning to Hawai’i as a tourist. But what begins as a journey to discover herself turns into much more as she learns the true history of the islands, Hawai’i’s Indigenous children, and the Native Hawaiian Sovereignty Movement.

” … a powerful, self-reflective testimony on the complexities of racial belonging and what it means to be home.” –RUDY P. GUEVARRA Jr. (Beyond Ethnicity: New Politics of Race In Hawai’i)

Please join author Sharon H. Chang in the Twin Cities for a special event celebrating her new memoir HAPA TALES AND OTHER LIES at Moon Palace Books. The evening will include reading and discussion from the author *plus* music, story, and words by Mixed artists Meghan Kreidler, Nicola Koh, and Marcelle Richards.

AUTHOR / SHARON H. CHANG ~ Sharon is an award-winning Author Photographer Activist with a lens on racism, social justice and the Asian American diaspora. She is author of the critically acclaimed academic book Raising Mixed Race: Multiracial Asian Children In a Post-Racial World and her newly released memoir, Hapa Tales and Other Lies: A Mixed Race Memoir About the Hawai’i I Never Knew. Her writing has also appeared in BuzzFeed, ThinkProgress, Racism Review, Hyphen Magazine, ParentMap Magazine, South Seattle Emerald, The Seattle Globalist, AAPI Voices and International Examiner. Sharon was named 2015 Social Justice Commentator of the Year by The Seattle Globalist and 2016 Favorite Local API Author / Writer by International Examiner readers. She is currently working her third book looking at Asian American women, gender, and race, to be co-authored with preeminent sociologist Joe R. Feagin.

MUSIC / MEGHAN KREIDLER ~ Meghan is an actor and musician based in the Twin Cities. She has worked with Theater Mu, Mixed Blood Theatre, Guthrie Theater, Children’s Theatre Company, Ten Thousand Things, Theatre Latte Da, Workhaus Collective, Park Square Theatre, and History Theatre. She is a Monologue and Teaching Artist with Penumbra Theatre’s Race Workshop. Kreidler is a graduate of the University of Minnesota/Guthrie Theatre BFA Actor Training Program. She is a recipient for the 2017 Ivey Award for Emerging Artist and Overall Excellence in Ensemble with Mixed Blood Theatre’s production of Vietgone. She was also named 2017 City Pages Artist of the Year. When Meghan isn’t performing in plays you can see her front local rock and roll band Kiss the Tiger Kiss the Tiger.

STORY / NICOLA KOH ~ Nicola is a Malaysian-Eurasian and Tetris demigod with two master’s degrees in Protestant theology which they lost their faith getting and an MFA from Hamline. Their work has appeared in Crab Orchard Review, Southwest Review, Sweet: A Literary Confection, and others. They were a 2018 VONA fellow and a finalist for the 2017 Glimmer Train Fiction Open.

WORDS / MARCELLE RICHARDS ~ Marcelle is a mixed race (Korean and white) genderfluid writer, shamanic practitioner, freelance editor, and self-taught artist. They were born in Honolulu, HI, and spent most of their life in California and Madison, WI before moving to Minneapolis last November. Their writing is informed by their travels, which have taken them across the U.S. and abroad; this fall, they will conduct ancestral and spiritual research in Korea. They have a B.S. degree in Zoology from the University of Wisconsin, Madison, where they were a UW-Madison Writing Fellow. They were a food and features writer for several years for Isthmus and Our Lives Magazine in Madison, but their storytelling is now taking a turn for more experimental and expansive forms.