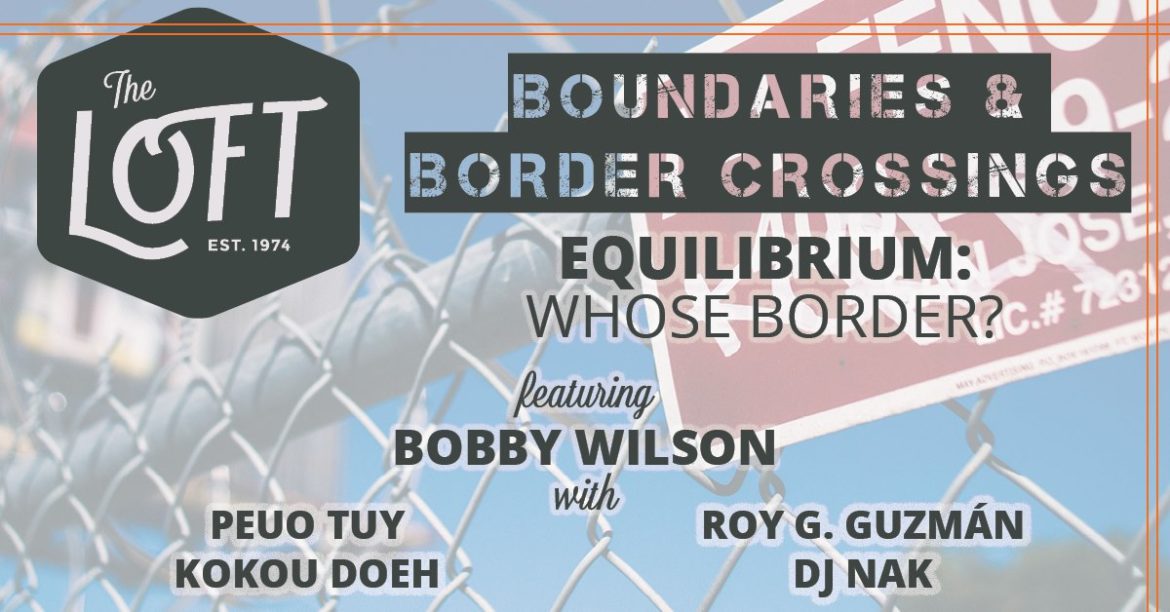 As part of the Loft's Boundaries and Border Crossings theme, the Loft will host a special EQ showcase featuring artists troubling the notion of borders and enforcement. The event features

As part of the Loft’s Boundaries and Border Crossings theme, the Loft will host a special EQ showcase featuring artists troubling the notion of borders and enforcement. The event features Bobby Wilson, with opening performances by Peuo Tuy, Roy G. Guzmán, and Kokou Doeh. This event is cosponsored by the Minnesota Freedom Fund and the James H Binger Center for New Americans.

Pay-what-you-wish at the door, as available

BOBBY WILSON was born and raised in his ancestral homelands of Minneapolis and St. Paul, Minnesota. Through a combination of teenage angst, confusion, and homelessness, he became an artist. Bobby spent many years writing short stories about his terrible circumstances, painting graffiti using only black and white, and reciting spoken word poetry about how unfair the government is. In 2009, Wilson met four other young Indigenous artists and founded a sketch comedy troupe called The 1491s. Together they wrote, filmed, and acted in over 100 short comedies and toured the continent bringing laughter to communities so far north they can’t even get avocados for under $10 apiece. Bobby has also appeared on numerous major media outlets including THE DAILY SHOW (Comedy Central), THE MOTH RADIO HOUR (NPR), WHAT WE DO IN THE SHADOWS (FX), and is a staff writer on the forthcoming Michael Schur series, RUTHERFORD FALLS (NBC). In addition to his professional accomplishments as a comedian over the last decade, Bobby Wilson brings a wealth of experience from living on the streets of Minneapolis, working as a carny with Tish Jones at the Minnesota State Fair, teaching countless workshops to high school students across the country, and growing up rooted in Dakota culture.

KOKOU DOEH is a Togolese man who has survived criminal and immigration incarceration. During his nearly two years in immigration detention in Minnesota he wrote a book of poetry which he is excited to share with all of you. Since his release he is working on a college degree, and has a job setting up computer labs at Saint Paul recreation centers.

ROY G. GUZMÁN received a 2019 grant from the National Endowment for the Arts and is a 2017 Ruth Lilly and Dorothy Sargent Rosenberg Poetry Fellow. Raised in Miami, Guzmán is currently pursuing a PhD in Cultural Studies and Comparative Literature at the University of Minnesota. Their debut collection, CATRACHOS, will be published by Graywolf Press on May 5, 2020.

About our Winter/Spring Theme, Boundaries and Border Crossings:

There has been much debate on the transgression of geographical borders and the impact this has on communities and individuals. These conversations raise various questions about how we define boundaries, whether geographical, social, cultural, or psychological and what happens when these boundaries are broken.

The written word allows us to cross borders and to explore what’s on the other side. In fact, stories are an invitation to transgress the boundaries that constrain us in search of a new perspective and better understanding. Through this theme the Loft invites readers and writers to consider what defines a physical or emotional border and why they might choose to cross it.