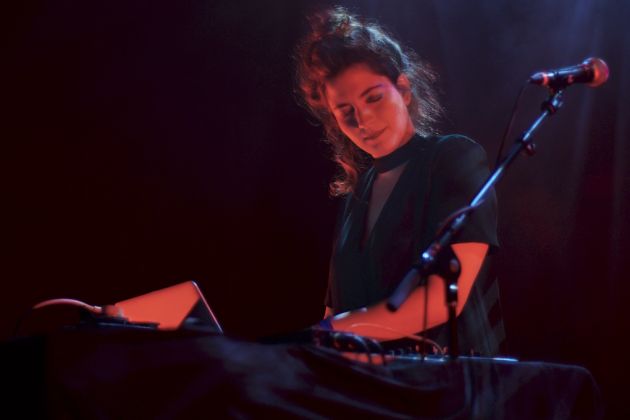 Nadah El Shazly is an experimental Egyptian singer, songwriter, multi-instrumentalist, and producer. Her work radically reinvents the popular music of her homeland from the early 20th century, incorporating electronics, free jazz, and noise while pushing all of the above to new sonic and harmonic frontiers. (El Shazly also has a background playing punk, traditional jazz, and electronica.)

She will be touring Canada and the U.S. starting in April, backed on select dates by Godspeed You! Black Emperor‘s Thierry Amar on double bass along with saxophonist / drummer / synth player Devin Brahja Waldman (Patti Smith, William Parker, and Thurston Moore, Brahja, etc.) El Shazly shares the bill on other dates with Danish post-punk outfit Iceage, whose 2018 album Beyondless was celebrated by outlets like Pitchfork, SPIN, and The Quietus.

I would love to connect with you on setting up coverage in anticipation of the tour.

At the bottom of this message, you’ll find a download for the music that El Shazly recorded as a guest vocalist with the “free Middle Eastern” septet Karkhana for Carte Blanche, an upcoming split LP with Sir Richard Bishop & W. David Oliphant. (As you’ll hear, Karkhana features some of the most forward-thinking musicians from Beirut, Cairo and Istanbul.)

Explore El Shazly’s critically-acclaimed debut album Ahwar, a similarly groundbreaking effort which The Wire hailed as “utterly unpredictable.” You can stream that whole album here and click on the video link below for a taste.

I’ve attached an essay Nadah wrote on the connections she hears between the “futuristic music of the Arab world from the 1890s to the 1920s” and the “time travel” sensation created by the work of Ornette Coleman. She writes: “I realized that there’s a huge difference between nostalgia and falling in love with something from the past, particularly when its relevance is carried-through over a hundred years later.”

As a pre-schooler, Shazly began taking piano lessons and studying music at the insistence of her mother — a non-musician. In addition, she also undertook soprano vocal training. At 17 she fronted the band Sick Gdrch, a punk band that specialized in covers by the Misfits. In 2009, refusing to be bound by a single genre, Shazly pursued — and landed — a gig as a singer in a jazz covers band at a Cairo hotel. Before long, however, she made her first concentrated efforts at electronica with Shorba, a short-lived but beloved cult band. She took part in many projects on Egypt’s tight-knit but endlessly creative indie scene, where its musicians, regardless of genre, influenced one another. Shazly began making a name for herself with her electronic productions.

In late 2015 she began working on her debut album. She produced the date herself and enlisted keyboardist/guitarist Maurice Louca (of indie music supergroup Lekhfa) and Sam Shalabi, two-thirds of the Dwarfs of East Agouza (third member Alan Bishop did not appear on the recording). Working both in Egypt and Montreal (with engineer Thierry Amar of Godspeed You! Black Emperor) the album, comprised of five originals and a radically re-visioned cover of Sayyid Darwish’s 1940s pop standard “Ana ‘Ishiqt (I Once Loved),” the set was completed with a large cast of reed, woodwind, string, and percussion players. It was released as Ahwar in November of 2017, and received universal acclaim from the press; it also made numerous year-end best-of lists. ~ Thom Jurek