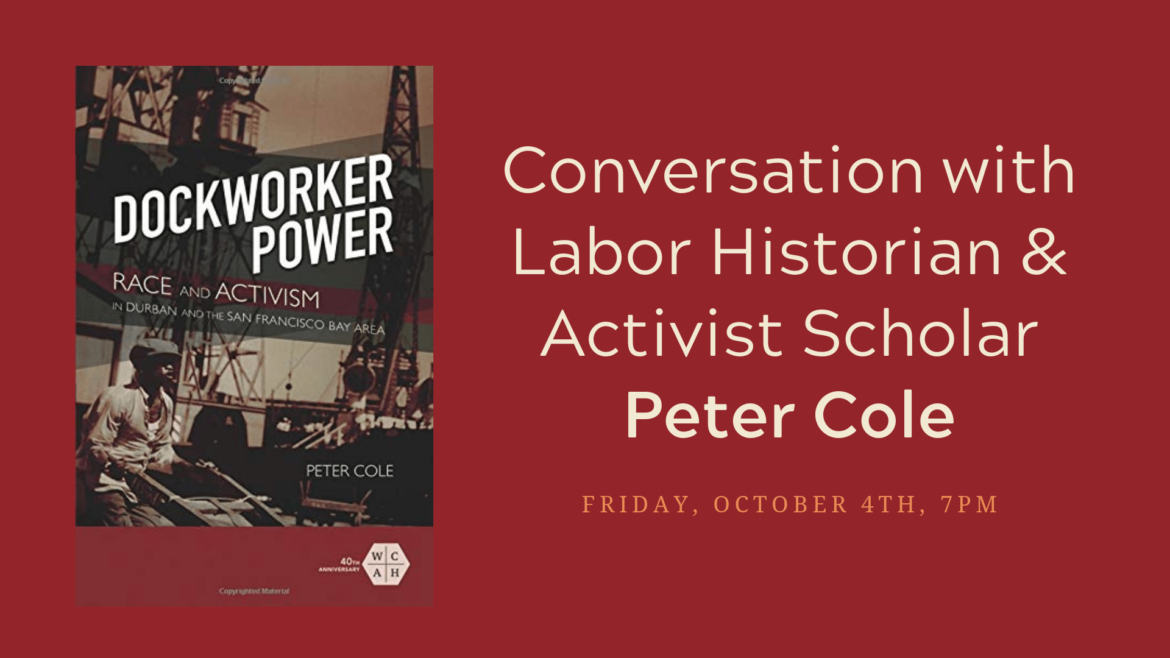 The East Side Freedom Library invites you to a conversation with labor historian and activist scholar, Peter Cole, Professor of History, Western Illinois University, presenting his new book DOCKWORKER POWER.

Dockworkers have power. Often missed in commentary on today’s globalizing economy, workers in the world’s ports can harness their role, at a strategic choke point, to promote their labor rights and social justice causes. Peter Cole brings such overlooked experiences to light in an eye-opening comparative study of Durban, South Africa, and the San Francisco Bay Area, California. Cole’s work reveals how dockworkers in each city drew on longstanding radical traditions to promote racial equality. He shows how they persevered when a new technology—container ships—sent a shockwave of layoffs through the industry. Their commitment to black internationalism and leftist politics sparked transnational work stoppages to protest apartheid and authoritarianism. DOCKWORKER POWER not only brings to light surprising parallels in the experiences of dockers half a world away from each other. It also offers a new perspective on how workers can change their conditions and world.

In addition to being a faculty member at Western Illinois University, Peter Cole is also a Research Associate in the Society, Work and Development Institute (SWOP) at the University of the Witwatersrand in Johannesburg, South Africa. Before publishing DOCKWORKER POWER last year, Peter authored Wobblies on the Waterfront: Interracial Unionism in Progressive-Era Philadelphia (University of Illinois Press, 2007), edited Ben Fletcher: The Life & Writings of a Black Wobbly  (Charles H. Kerr, 2007), and co-edited Wobblies of the World: A Global History of the IWW (Pluto Press, 2017).  He has written articles in many scholarly journals, and also writes for popular magazines and newspapers, including Washington Post, TIME, Miami Herald, San Francisco Chronicle, Mail & Guardian (Johannesburg), Boom, Africa Is A Country, Jacobin, In These Times, JSTOR Daily, Black Perspectives, and more.