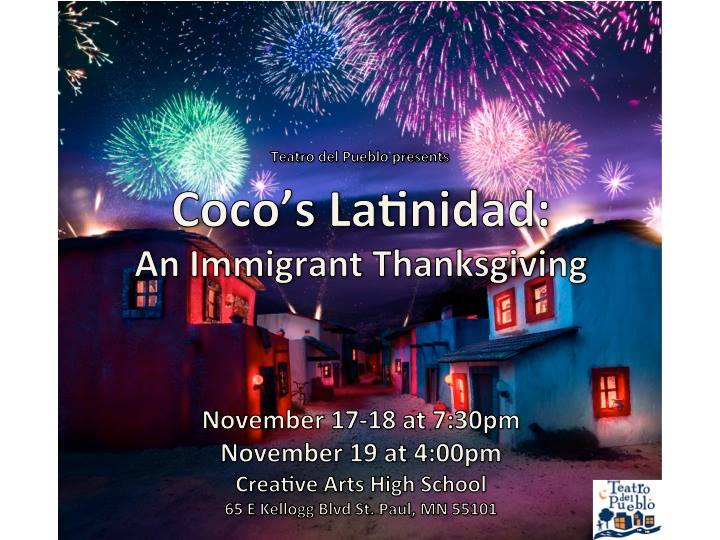 Teatro del Pueblo Presents a new episode of Coco’s Latinidad: An Immigrant’s Thanksgiving…Latin Flair ‘n the Air hosted by Silvia Pontaza Welcome to Coco’s barrio! From the heart of downtown Saint Paul, at the

Welcome to Coco’s barrio! From the heart of downtown Saint Paul, at the Creative Arts School Theater join us for a live bilingual radio broadcast of Coco’s Latinidad. Described as a cross between SNL and Prairie Home Companion, Coco’s Latinidad showcases the power of Latinx artists with humor, drama and lots of music. Host, Coco, will take us on a stroll through her barrio, where dogs bark Spanish lullabies and gatos meow “al son” Latino. Experience an Immigrant Thanksgiving like no other. Embark on a musical adventure with our eclectic musical guest, Alma Andina and other special guests. Directed by Alberto Justiniano of Teatro Del Pueblo. Coco’s Latinidad is brought you by the Knight Foundation, the Saint Paul Star Grant. “This activity is made possible by the voters of Minnesota through a grant from the Metropolitan Regional Arts Council, thanks to a legislative appropriation from the arts and cultural heritage fund.”

WHEN: Friday and Saturday, November 17th and 18th, at 7:30 pm, and Sunday, November 19th at 4pm
WHERE: The Creative Arts School (Theater Auditorium; 65 E Kellogg Blvd, St Paul, MN 55101).
TICKETS: General Admission $15, Students & Seniors $12, and for groups of 10+ $10. Tickets are available through our website starting November 2nd, or at the door. For more information please visitwww.teatrodelpueblo.org

Coco’s Latinidad, is loosely inspired by Minnesota Public Radio’s program, “A Prairie Home Companion,” and has been created with input and insight from the local Latino community. Teatro has conducted a series of informal interviews and story circles with Latino artists and community members. The story circles, led by playwright Silvia Pontaza, took place in community centers including El Centro Tyrone Guzman, Plaza Labor, Jane Addams School for Democracy, and highlighted voices from the local Latino community, as well as local immigrants and refugees.