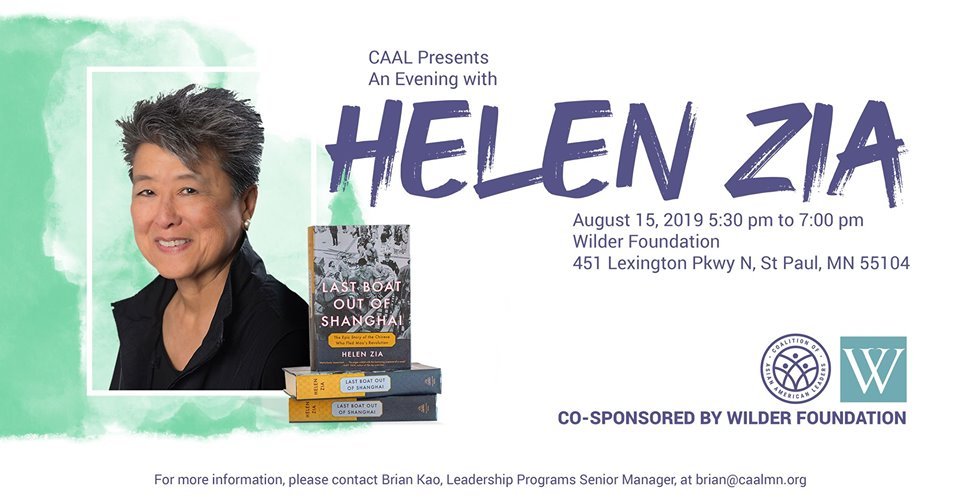 Join activist and author Helen Zia as she discusses her latest book, Last Boat Out of Shanghai: The Epic Story of the Chinese Who Fled Mao’s Revolution.

During the event, Helen Zia will be joined in conversation with Bo Thao-Urabe, CAAL’s Executive and Network Director about this latest book and her social justice movement work, to be followed by an audience Q&A session and book signing.

A limited number of books will be available to purchase at the event. Want to ensure that you’ll get your copy? RSVP and purchase your book.

Dinner will be provided.

HELEN ZIA
Helen Zia is an activist, author and former journalist. In 2000, her first book was published: Asian American Dreams: The Emergence of an American People, a finalist for the prestigious Kiriyama Pacific Rim Book Prize. She also authored the story of Wen Ho Lee in ‘My Country Versus Me,’ about the Los Alamos scientist who was falsely accused of being a spy for China in the “worst case since the Rosenbergs.”

She was Executive Editor of Ms. Magazine and a founding board co-chair of the Women’s Media Center. She has been active in many non-profit organizations, including Equality Now, AAJA,
and KQED. Her ground-breaking articles, essays and reviews have appeared in many publications, books and anthologies, receiving numerous awards.

The daughter of immigrants from China, Helen has been outspoken on issues ranging from human rights and peace to women’s rights and countering hate violence and homophobia. Her work on the 1980s Asian American landmark civil rights case of anti-Asian violence is featured in the Academy Award nominated documentary, “Who Killed Vincent Chin?” and she was profiled in Bill Moyers’ PBS series, “Becoming American: The Chinese Experience.”

THE LAST BOAT OUT OF SHANGHAI
After twelve years of research and writing involving hundreds of interviews about this untold exodus Chinese American journalist Helen Zia joins us to share these moving accounts. Helen weaves the story of four young Shanghai residents who wrestled with the decision to abandon everything for an uncertain life as refugees in Hong Kong, Taiwan, and the U.S

Last Boat Out of Shanghai is based on the dramatic, real-life stories of a generation caught up in the mass rush out of Shanghai in the wake of China’s 1949 Communist Revolution, with startling parallels to the struggles faced by immigrants today.