Book Release: "Ten Things Everyone Should Know About Spoken Word and Slam Poetry"

04octAll DayBook Release: "Ten Things Everyone Should Know About Spoken Word and Slam Poetry"Book and 22-track companion CD by GUANTE 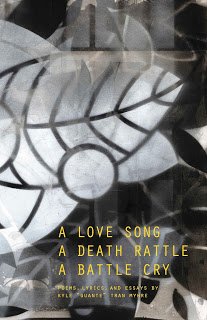 Over the past decade, Minneapolis-based artist Kyle Tran Myhre (better known by his stage name, Guante) has quietly positioned himself as one of the most unique, boundary-pushing voices working at the intersections of spoken word poetry, hip hop, and social justice. His debut book, a collection of poems, song lyrics, and essays titled A Love Song, A Death Rattle, A Battle Cry, showcases the two-time National Poetry Slam champion’s most powerful work.

“Poetry is about challenging ourselves to see what is so often unseen,” Guante says. “That can mean shining a light on what we usually keep hidden, but it can also mean striving to make big, abstract concepts like identity, power, and justice… smaller, more concrete, easier to hold. We do this by telling stories. We do it through metaphor. For me, the best poetry creates space for us to ask questions, to grapple with ideas through the lens of our own experience. If there is a running theme in this book, it is the interplay of perspective and power, how our lenses and questions reflect not just our experiences and personalities, but the systems of power through which we move, too. This idea is a big part of my work in general, but I think it’s doubly important right now, so close to the upcoming election. I’m interested in questioning and reframing the idea of power—other people’s, and our own.”

One part mixtape, one part disorientation guide, and one part career retrospective, A Love Song, A Death Rattle, A Battle Cry documents the past decade of Guante’s work, including poems like “Ten Responses to the Phrase Man Up” (featured on Upworthy) and “Action” (which Guante performed at the United Nations in 2015), alongside song lyrics and a substantial bank of essays exploring a range of hot-button issues. The book also features a foreword by poet and theater artist Saymoukda Vongsay, discussion questions for use by educators, writing prompts for aspiring artists, and numerous insights into not only Guante’s work itself, but his process as well.

The book has a companion piece in the form of a 22-track CD, a sampler compilation featuring all of the songs whose lyrics appear in the book. The book/CD package is available for preorder through Button Poetry (a Twin Cities-based organization and publishing hub that also happens to be the largest distributor of spoken word videos in the world). Twin Cities residents can pick up a copy at one of five Fall 2016 release events: