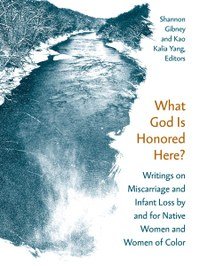 Next month, Twin Cities authors Shannon Gibney and Kao Kalia Yang will release a new edited collection published by the University of Minnesota Press called What God Is Honored Here?: Writings on Miscarriage and Infant Loss by and for Native Women and Women of Color. Set to be released on October 15, 2019, which is National Pregnancy and Infant Loss Awareness Day, the collection includes Native women and women of color poignantly sharing their pain, revelations, and hope after experiencing the traumas of miscarriage and infant loss.

ABOUT THE BOOK:
What God Is Honored Here? is the first book of its kind—and urgently necessary. This is a literary collection of voices of Indigenous women and women of color who have undergone miscarriage and infant loss, experiences that disproportionately affect women who have often been cast toward the margins in the United States of America.

From the story of dashed cultural expectations in an interracial marriage to poems that speak of loss across generations, from harrowing accounts of misdiagnoses, ectopic pregnancies, and late-term stillbirths to the poignant chronicles of miscarriages and mysterious infant deaths, What God Is Honored Here? brings women together to speak to one another about the traumas and tragedies of womanhood. In its heartbreaking beauty, this book offers an integral perspective on how culture and religion, spirit and body, unite in the reproductive lives of women of color and Indigenous women as they bear witness to loss, search for what is not there, and claim for themselves and others their fundamental humanity. Powerfully and with brutal honesty, they write about what it means to reclaim life in the face of death.

Editors Shannon Gibney and Kao Kalia Yang acknowledge “who we had been could not have prepared us for who we would become in the wake of these words,” yet the writings collected here offer insight, comfort, and, finally, hope for all those who, like the women gathered here, have found grief a lonely place.

Shannon Gibney is a writer, educator, activist, and the author of See No Color, a young adult novel that won the Minnesota Book Award in Young People’s Literature. She is faculty in English at Minneapolis College, where she teaches writing. She has been a Bush Artist and McKnight Writing Fellow. Her critically acclaimed novel Dream Country follows more than five generations of an African-descended family as they crisscross the Atlantic, both voluntarily and involuntarily.

Kao Kalia Yang is author of The Latehomecomer: A Hmong Family Memoir, winner of two Minnesota Book Awards and a finalist for the PEN USA Award in Creative Nonfiction and the Asian Literary Award in Nonfiction. Her second book, The Song Poet: A Memoir of My Father, won a Minnesota Book Award and was a finalist for the National Book Critics Circle Award, the Chautauqua Prize, the PEN USA Award in Nonfiction, and the Dayton’s Literary Peace Prize.