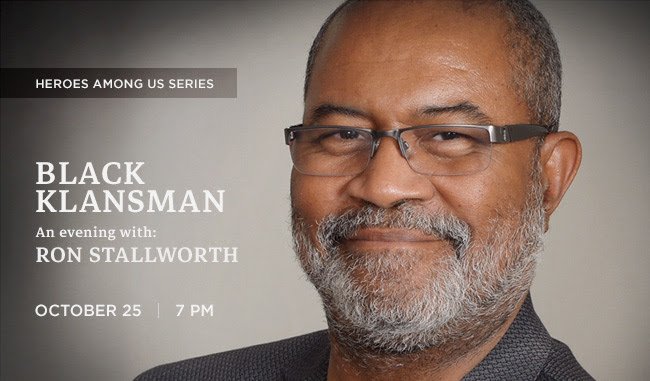 Ron Stallworth will headline Beth El Synagogue’s next Heroes Among Us Speaker Series. In 1978, the first black detective in the Colorado Springs Police department, answered a classified ad posted by

Ron Stallworth will headline Beth El Synagogue’s next Heroes Among Us Speaker Series.

In 1978, the first black detective in the Colorado Springs Police department, answered a classified ad posted by the local Ku Klux Klan faction. Detective Ron Stallworth used his real name and some racist epithets to throw the recruiter off the truth, and as a result, Stallworth received a warm welcome and a request for a face-to-face meeting. So begins the incredible true story Stallworth retells in BLACK KLANSMAN: Race, Hate, and the Undercover Investigation of a Lifetime, a fascinating and timely non-fiction account that reads like a crime thriller.

This story has recently been translated to the big screen, with Spike Lee’s BlacKkKlansman. Produced by Jordan Peele, the film is the winner of the 2018 Grand Jury Prize at the Cannes Film Festival. Stallworth is played by John David Washington.

During his seven months of undercover work, Stallworth sent his white partner to any in-person Klan meetings, while he remained the man on the other end of the phone-line. In his time with the organization, Stallworth succeeded in sabotaging: cross burnings, attempts by the Klan to further expand their membership and attempts to weaponize a militia. He met and befriended David Duke (on the phone; in person their relationship is less than warm), and exposed high level government officials who had been secretly meeting with the Klan.

This captivating true story of one of the most audacious, and incredible undercover investigations in history.

Recognizing the work our Law Enforcement has done to combat hate and bigotry is precisely why Ron Stallworth is our next Heroes Among Us speaker.

Once in a Lifetime Opportunity! Includes one premium ticket with special, upfront assigned seating and admission to a private VIP reception with Ron Stallworth at 5:30pm, prior to the general presentation. The VIP reception will feature delectable fare. Reception level attendees will also receive a copy of Ron’s book Black Klansman. $300 is tax deductible.*

One seat in a special reserved section near the front. $64 is tax deductible.*

One general admission ticket for those with a valid military (active or reserve duty), police, firefighter, or EMS ID.