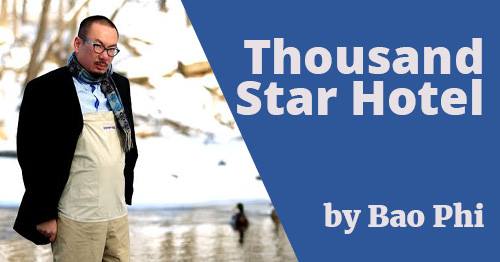 “The many fans of Bao Phi will be thrilled by this book. New readers will be seduced by his trademark blend of passion, politics, and poetry. His poems alternate between the profane and the provocative as they deal with war and history, love and heartbreak, the inner city and the inner self. A powerful read, a gutsy writer”
—Viet Thanh Nguyen, Pulitzer Prize-winning author of The Sympathizer.

Bao Phi has been a performance poet since 1991. A two-time Minnesota Grand Slam champion and a National Poetry Slam finalist, he has performed as a featured artist all over the United States, has appeared onHBO Presents Russell Simmons Def Poetry, and a poem of his appeared in the 2006 Best American Poetry anthology. He has been a City Pages and Star Tribune Artist of the Year. He is currently Program Director at the Loft Literary Center, where he started as a receptionist 15 years ago. His first collection of poems, Sông I Sing, was published by Coffee House Press in 2011. His second collection of poems, Thousand Star Hotel, will be published in summer of 2017, also by Coffee House, for which he was selected by Minnesota Monthly as Author of the Year. His first children’s book, to be illustrated by Thi Bui, will be published by Capstone Press in the fall of 2017.

Advanced tickets guarantee a general admission seat and help cover the Loft’s costs to host the event. Pay-what-you-can tickets are available at the door 30 minutes prior to the event on a first-come, first-served basis. No one turned away for lack of funds. Doors open 30 minutes before the event. Seating is general admission (not assigned).