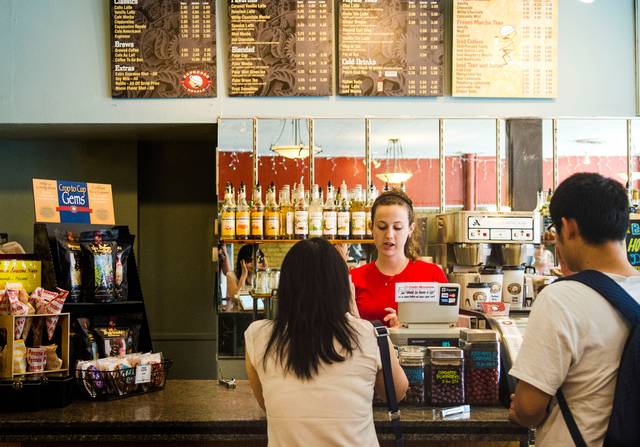 Espresso Royale has been a part of the University of Minnesota community for more than two decades, but now the coffeehouse’s future in Dinkytown is uncertain.

Under the impression they’d have to leave the space next summer, Espresso Royale Regional Manager Dan Zielske has been looking for a new location in Dinkytown.

Now, Zielske doesn’t know where Espresso Royale will be in a year when their current lease is up.“There’s a lot in limbo right now,” he said.

Zielske said he was led to believe the new owner wouldn’t renew the coffee shop’s lease in June 2014, but Dzubnar said he doesn’t have any plans for the space yet.

“We just bought the building as an investment,” Dzubnar said. “I haven’t made a decision one way or another what I’ll do with it.”

He said the site isn’t part of his plans for this year.

Zielske said they’d love to stay in the building if they don’t have to leave.

If he does develop the space in the future, he said, it wouldn’t be a Green Mill restaurant, but it could be a new Town Hall Brewery location.

Town Hall Brewery, the West Bank taproom Dzubnar co-owns, is currently expanding in the city. It has a location in South Minneapolis and has another one under construction in Uptown. Dzubnar also owns the building that houses Al’s Breakfast, but Dzubnar said he “won’t touch Al’s” even if he does develop the space.

Dinkytown Business Association President Skott Johnson said he heard the Espresso Royale space was going to be a taproom, but Dzubnar hasn’t approached him yet.

“None of us are happy to see Espresso Royale leave the space,” Johnson said.

There are two other Espresso Royales in the Twin Cities, and nationally they are in five states.

Last summer, the previous owner sold the building to Dzubnar without telling Espresso Royale about the deal until afterwards. Johnson said the coffee shop should’ve been given a chance to buy the building.

“We’re not happy with the landlord selling it without conferring with Espresso Royale,” he said. “That just didn’t seem right.”

Since 1988, Espresso Royale has served Dinkytown residents with a place to chat, study and caffeinate.

Matthew Williams went to graduate school at the University in 2005 and has used Espresso Royale as his “second office” ever since.

“Everything I did in school, I wrote here,” Williams said. “It’s a stopping point in Dinkytown with a big sense of community.”

He had some of his favorite intellectual conversations at the café’s tables, he said, where he used to meet with students in the English classes he taught.

Originally from Pittsburgh, Espresso Royale customer Morgan Dysert said she came to the University because of Dinkytown, but she now feels the area has become commercialized and unoriginal.

“It’s expected for a place to grow and expand,” Dysert said, “but when it comes to iconic places … you don’t touch that.”

If the coffee shop moves, she said she’ll miss the artwork hung on the walls by local artists. She’ll also miss the regulars who have become so familiar, she said.

Zielske said he’s tried to nurture a place where students can sit down, drink from real mugs and actually have conversations — “not just a kiosk, but a coffeehouse.”

Espresso Royale assistant manager Rex Vogen said he hopes they can stay in Dinkytown but agreed the area’s atmosphere is changing.

“The direction things are headed isn’t optimal,” he said.