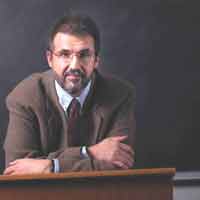 It’s lonely at the top. That old showbiz line was never more timely than at the April 19 School Board candidates’ forum at Eastside Neighborhood Services, where nine irascible education reformers faced off against the board’s lone incumbent, Joseph Erickson.

For two hours, a crowd of about 50 equally disenchanted voters watched as Erickson absorbed what must have seemed like four-years worth of criticism on issues ranging from superintendent hiring debacles and the racial achievement gap to teacher retention and the district’s current enrollment crisis. “We need a leadership team that can move us out of crisis,” said Pam Costain, echoing the views of the other eight challengers.

Erickson stood up to the barrage with a civility that was tested on only a couple of occasions. Explaining why he was running for re-election after four years of mostly bad news in the district (and refusing to join three other incumbents who retired rather than face the voters), the taciturn college professor simply noted that, “It’s the most important thing I can do now.”

He acknowledged that there are plenty of opportunities for improvement in the district, pointing specifically at the areas of student performance, district stability, and school safety. But, throughout the evening he reminded his opponents how complex these issues are and suggested that having someone on the board with four years of experience might be helpful. “Continuity is important,” he said. “I would be able to provide that continuity.”

“I get to look everyday at some of the failures of our school system,” said Easter, who runs The City, Inc., an alternative school for some of the city’s most troubled kids. He added that the gap in student achievement between children of color and their white classmates “makes me furious.”

From structure to superintendents
The audience did not shy away from asking the tough questions, testing the candidates on how the board should be structured, how to close the achievement gap, what to look for in a new superintendent, how to improve access to School Board members, how to stabilize the district’s enrollment, and how to decrease violence and truancy. One questioner even had the nerve to ask the candidates’ opinion of so-called “Intelligent Design.”

Not surprisingly, there were no creationists in the house. “I’m in favor of intelligence,” said James.

But there were more divergent opinions on the question of whether the School Board should be elected by district, as proposed in a bill by state Rep. Jim Davnie. Mann, James, Erickson, and Costain opposed the bill, arguing that it would do little to improve student achievement. Harrison-Townsend liked the idea, but said she was concerned about aspects of the Davnie bill. Easter, Williams, Stewart, Davis, and Madden said they would support it. “Entire communities in the city are not being heard,” Madden said, noting that a structural change would help to get more parents involved in the schools. “Parents who get involved help their children achieve.”

On the achievement gap, most candidates agreed that a stronger commitment to early childhood education, recruiting and retaining teachers of color, and working to involve parents more fully in the schools were the keys. But Stewart noted that the types of skills children learn in preschool are vital. “In early childhood, kids must develop cognitive skills,” he explained. “Head Start doesn’t do that.”

There was general agreement, as well, on the importance of “getting it right this time,” as Harrison-Townsend put it, when hiring a new superintendent. Easter said he was “disappointed” by the way the board treated former superintendent Thandiwe Peebles—especially its decision to make her performance appraisal public.

That brought a brusque retort from Erickson, who as board chair was in the middle of the Peebles debacle. “I would remind Mr. Easter that state law requires that those appraisals be made public,” he said.

Erickson also mounted a spirited defense of decisions the board has made to increase its accessibility to citizens. He said he and his colleagues have shifted the time of the board’s discussion period to 6 p.m. and noted that the meetings are now broadcast on cable. The board’s Web site is in the process of archiving its decisions and policies, and a new “Board Night Out” plan will bring School Board members out into the community more often, he said.

Surveys have shown that parent want that kind of stability, Erickson acknowledged, but they also want quality and safety and other things from their schools. And Minneapolis schools can provide those things. “It’s true that we lost 575 kids to St. Anthony, but 500 [other kids] open-enrolled from St. Anthony to Minneapolis,” he said. “It’s a complex issue.”

Erickson tweaked Davis again on the question of violence and truancy in the schools. Davis stressed the need for the district to be working more closely with other agencies to stem the tide of truancy, which she called “a red flag.”

But the district is already working closely with Hennepin County and the city of Minneapolis on this issue, Erickson said. Indeed, the partnership has been held by others as “a model for the country,” he added.

It was a brief moment of triumph in an evening dominated by hard truths about the district’s challenges, but Erickson would not allow himself even the hint of a smile. He knows that his four years on the board give him insights and information his opponents lack, but he also knows that his perch at the top of a troubled organization leaves him far more vulnerable than valuable.