Roberson, or Erro as he’s also known, is widely considered the king of independent soul music, having sold more than 100,000 copies of each of his seven solo albums and having garnered two Grammy nominations. Erro has achieved this success with no major label assistance, little radio airplay and limited distribution. Roberson’s most recent solo release, “Mr. Nice Guy” rose all the way to 14 on the Billboard R&B album charts.

“I’m excited to be coming back to Minnesota. It’s going to be a great time. It’s going to be soulful, some silliness, sensual, sexy, spiritual – a whole lot of S’s,” joked Roberson, who is known for his live stage performances – oftentimes interacting with the audience and even making up complex songs on the spot. “We’re all about sharing. It’s going to be a real fun night.”

Since Roberson’s last performance in Minnesota – also at the Dakota – the multi-talented artist has collaborated with Fred Hammond, Dave Hollister and Brian Courtney Wilson to form the gospel quartet, Four Tenors; and most recently Roberson appeared on the critically acclaimed Robert Glasper project “Black Radio 2.”

Roberson said since the release of “Mr. Nice Guy” he and his wife have had a second son and being a father has affected his work – for the better. 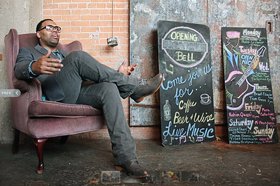 “Having kids opens you up to a different level of love,” said Roberson. “In recording now I dive deeper into my emotions. Plus I’m more focused because I know my time is limited because I need that time with my family.”

A much sought after voice and songwriter, Roberson has written for and/or recorded with everyone from Jill Scott (“Gettin’ in the Way”), Vivian Green (“Emotional Rollercoaster”), Musiq Soulchild (“Previous Cats,” “Mary Go Round”), Dwele (“Hold On”) to 112 and others. To celebrate his collaborations, Erro is releasing “B Sides, Features and Heartaches” on Feb. 4. “B Sides” will feature several released Roberson collaborations, as well as some unreleased material. His next release of entirely new material is due this coming summer.

“We’re half done with the project,” said Roberson, who said the sound is a mix of Tribe Called Quest, Commissioned and Stevie Wonder. “It’s a musical gumbo. But the added ingredient is (the late) George Duke. I was a huge George Duke fan and had the opportunity to meet and talk with him over the last three years. I was already headed in that direction (of Duke’s music). His song, ‘Someday’ is my favorite song in the whole world.” 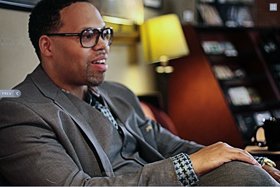