Student leaders and allies at the College of Saint Benedict and Saint John’s University (CSB/SJU) in Saint Joseph are currently dealing with the ongoing offensive party themes that were created to commemorate the graduating senior class. To commence this year’s graduating seniors at CSB/SJU, the Fourteenth Annual Mandatory Senior Appreciate Keg (FAMSAK), a private Facebook of seniors, has gone out of its way to be ‘creatively’ offensive. Who would be surprised? This is the fourteenth year of this tradition hence the “Fourteenth” in the title. In other words, like any other year, the celebration goes on even if other students are hurt and against it.

With themes like “Pig Tails and Pedophiles” and the ever classic Mexico theme: “Cross the Border into the Quarters,” there are bound to be “overly sensitive” students at the college.

The FAMSAK students say it is not harmful. It’s just a bunch of college kids wearing sombreros and holding chihuahuas behind a gate that supposedly signifies the US and Mexico border.

I guess I must be ‘overly sensitive’ because this deeply bothers me. I graduated just last year from CSB/SJU, and all these pictures of these parties that dehumanizes people and degrades them to nothing more than a party idea is sickening. Parties like these are not for people like me. They are meant to exclude people.

I mean it’s only one of the most contentious policy issues in the United States, and there have only been a couple of thousands of migrant deaths, right? I am sure no one, not even Latino students, would get offended at all.

To deter some of the “overly sensitive” senior students, here are some encouraging quotes from supporters on FB:

“It’s tradition. If you don’t like it, you could have gone to a different school.”

“It’s a party. Why are you being so sensitive?”

“We didn’t wear these costumes to intentionally hurt anyone. Get over it.” 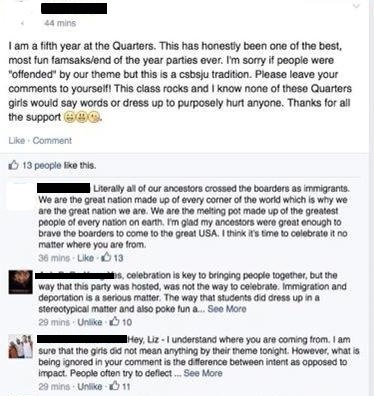 Not all students agree with the party themes (Kudos to these vocal student leaders): 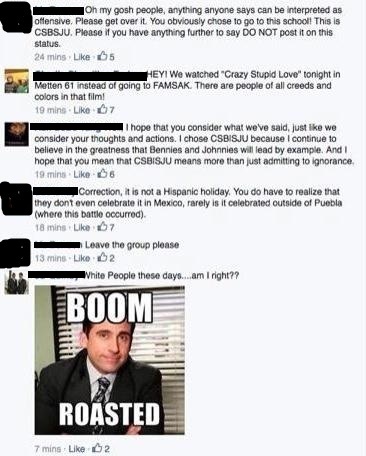 I would like to say this is not the CSBSJU that I know, but I would be lying if I said that student body wasn’t a reflection of its own cultural climate. It’s not just a few bad apples; it’s an underlying permissiveness that allows students to even think they can throw such parties and get away with it. This isn’t just one particular college campus, but all college campuses with students that continue to throw offensive parties.

Sadly, they can get it away with it.

Sometimes, most of the time, students of color and allies can’t do anything. Some of us watch it happen again and again, some comment and disagree, and some of them are like me who write and document these things. Some try to educate or get angry, and some learn the true meaning of friendship in the context of racism.