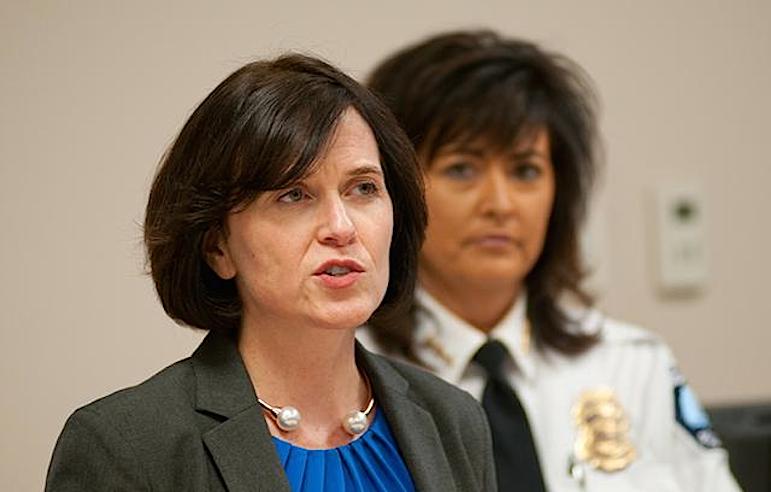 This photo is courtesy of MinnPost.

A woman is appointed as police chief in a major metro. Immediately she is undermined and disrespected by rank and file officers who still do not accept a world where a woman can be their superior, especially in their estimation, in work that requires some hyper-masculine militaristic authoritarian posture and philosophy.

Said chief spends an inordinate amount of time trying to win over the rank and file by publicly expressing unequivocal support even in the most heinous cases of police misconduct and brutality. What does this buy her? No respect from her officers, no willingness to change or adhere to ideas of better policing. They still consider themselves hammers, and we are the nails.

A woman is elected mayor in a free and democratic process, she is our choice to lead. At the first opportunity, the police embarrass themselves in a flimsy attempt to align this mayor with street gangs through a photo. The police are mocked and belittled nationally and the butt of a joke. This enrages them more and fuels a general feeling of retribution that they will eventually enact on this chief and this mayor and these people. In the aftermath, the mayor and the chief try to walk this ephemeral impossible tightrope of appeasing the rank and file and placating their ridiculous smallness, instead of making the difficult radical choice of rooting out this cancerous police culture and setting a new standard, doomed by half-measures.

Meanwhile, the cases of abuse by police against citizens continue to mount, costing the city millions and millions of dollars as the City Council continues a compliant position of indemnifying these cancerous individuals from responsibility, further embolden their militarism. Meanwhile, the chief and the mayor are negotiating contracts conceding more and more power and immunity to police officers. Recruits continue to join the ranks of this police, continue to commute from other suburbs, continue to harden their view of folks in these communities as Us vs. Them. The police force continues to not reflect the face of the folks they are policing. The powder in the keg continues to build.

A young man is killed by the police. I should say, another young man is killed by police. There is an awakening in community that enough is enough. The mayor and the chief respond, already knowing that they have little respect and/or support by this force mostly because they are women, they respond in a curious way. They ostensibly cast the protestors as villains. What does this “support” of police militarism buy them? It buys them a revenge plan by police at that precinct. They will show us who is boss, and show the mayor and the chief, now smarting from the insult of commoners questioning and challenging their authority: somebody has to pay.

An inspector steps out and admonishes his officers for “acting like babies,” and to “do your job.” He is dealt with swiftly by the powerful rank and file. He is taught a lesson. They claim that BLM has him by the balls. These small men, they trump up the necessary grounds and inexplicably the chief falls in line and suspends this inspector. Is she still trying to win the favor of a force who clearly will never favor her?

The cascade continues. This move demoralizes community members who were looking for an opportunity to work with police and forge a compromising path forward. Police lose their only allies in the community. The police of that precinct stage a community engagement event. It is like a ghost town in the same space where stood hundreds of community, providing fellowship and warmth and food and good conversation; now there is the occasional child with parent given a free bike helmet and a popsicle.

The mayor and the chief endeavor to solve this community engagement problem. They articulate no plan to the community, no plan to stop the violence, no plan to engage the community. Perhaps the two rely on a strange national reputation they are promoting of doing reform right, not wanting to tarnish that image by exposing the chaos under the surface. A false image garnered mostly because the citizens showed great restraint, they are given credit because those people did not burn down their community as they have done in other cities. The communication with general community becomes less and less, whittled down to a tighter and tighter circle of folks they deem representative of community; delusional at best.

The streets get hotter by the day, bolder in the knowledge that this is the wild wild west. The police in that precinct continue to pout and give a collective, “See what you made? See who you really are without my authority? See how y’all act without my boot?” to the community. Resentment grows on both sides.

On social media, the beefs grow and the manhood challenges grow out of control and out of proportion. The access to firearms grows and is easy as getting takis from the corner store.

On a warm day in May, while they blast away with impunity, police kick back behind the locked door of the precinct with impunity, and a grandma is sitting in her car and they blast her. Because of petty vindictiveness from young people who don’t know any better and police officers who should, because of ingrained, deeply rooted sexist and racist philosophies of what policing and responsibility and community is, because of a cascade of domino events, Grandma is dead.

It’s senseless, it’s maddening, it’s devastating and it was avoidable.

I encourage female mayors and police chiefs, people of color in positions of power, people in dominant culture who understand the effects of deep root system injustice: don’t do half measures. You won’t last long in your position as a result anyway, you might as well go in and do as much radical change as you can before you are shown the door.

Here we are right now, is this opportunity or dreaded march toward inevitable end? Some might say, well your first statement is how this would destroy a city, that seems hyperbolic. They might say, “I’m good, I’m living nice, I’m drinking fine craft beer, and my bike is outfitted for winter fat tire riding, life is swell.”

The destruction of a city is like the destruction of the body; one system failure leads to the inevitable next. Just continue thinking, oh that’s just my liver, that’s happening over there.