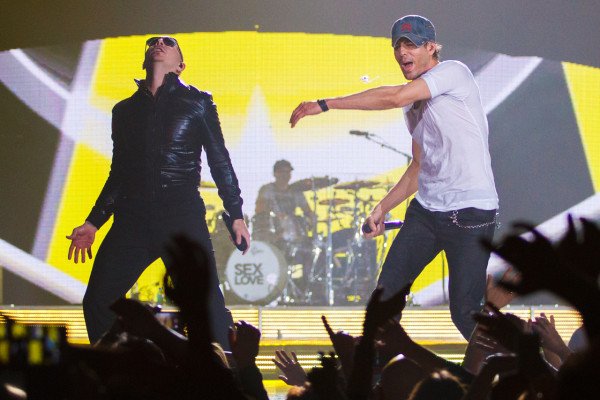 “Baby I like it,” is not just a line from Enrique Iglesias and Pitbull’s hit “I Like It,” it was also my impression when I left the Target Center on Saturday, February 21.

Cricket Wireless Presents Enrique Iglesias and Pitbull tour made their final stop in Minneapolis, Minnesota. Opening for the two artists was Colombian music artist J Balvin. J Balvin did his thing and impressed me with his bangers and the stunts his dance crew performed as they were flipping all over the place to the tune of Latino music. He did his part in getting the crowd on their feet and Pitbull took it to another level when he made his entrance.

Rising from beneath the stage was Pitbull to join two ladies dressed in red suits shaking their hineys to the “Pretty Women” instrumental with Pitbull’s cover to it. Pitbull came with the energy rapping and dancing to his timeless tracks.

Pitbull also tells a story throughout his performance and talks about how his family went through generations of struggle and he used that as motivation to make it in the music industry. He said it started while watching music videos on T.V. and that’s when he discovered he wanted to perform with “sexy ladies” and make music videos.

Weather it was “Give Me Everything,” “Shake,” “Fireball,” “I Know You Want Me (Calle Ocho),” “Rain Over Me,” “Hotel Room Service,” “On the Floor,” or any of his bangers, he made them sound even better than how they sound on MP3 and he had the crowd singing and dancing with him.

It was apparent he gave the fans “everything” and had fun while doing it. He said what he loves most about music is that it’s a universal message and it brings people together. In the middle of his performance, he asked for one thing from the audience, leave all the negative in 2014 and on the night of February 21, and the rest of 2015 focus on the positive and have fun.

That’s certainly what he did up until his final song when he brought down the house with “Give Me Everything.”

Iglesias followed up Pitbull’s performance opening with his hit “Tonight I’m F—ing You.” He brought the antics including bringing up an audience member on stage to drink with him. Iglesias also got that guest and the audience to sing along to a song that he listened to when he first moved to the U.S.A. at age eight. Iglesias said the transition was tough, especially not being very good at speaking English and he said that song helped him cope with his transition.

This show was also about celebrating your heritage. Being proud of where you come from but realizing that living in America is blessing. When Pitbull did a noise roll call it was discovered that there was a diverse population of Hispanics in attendance as well as blacks and whites who were in attendance and he used that to reiterate his point that music has a universal message and it brings people from all over the world together.

Iglesias also shared that every morning when he wakes up on tour he complains about having to perform live, but said every time he actually performs he remembers how much he loves his job.

“Every time I see you [fans at concerts] I wonder what the fuck was I complaining about. I have the best job in the world,” Iglesias said.

After Iglesias kissed one of the members in the audience, leaving one person star struck, the concert wrapped up with Pitbull joining Iglesias for one last song, “I Like It.”

A fitting song for the expression of everyone’s reaction in the building, no doubt, Iglesias and Pitbull need to return to the Minneapple for another performance in the future because Minnesota “likes it.”