The bacon trend has been going on way too long. I don’t mean the old-fashioned bacon that granny used to fry for breakfast and save the grease to cook everything else in. I mean the retro-trendy use of bacon as a symbol of something vaguely ironic, I don’t know what, but I’m pretty sure I don’t approve of it.

Triple Rock Social Club in Minneapolis started handing out free bacon back in 2008. Since that time, the whole bacon thing has spun out of control. I can’t tell you how many times I’ve heard some otherwise normal-seeming person say, “Everything’s better with bacon, am I right?” No. Are they joking? Quoting this inane t-shirt? Or do they just really, really like bacon?

I spoke recently with someone who really, really likes bacon. He and his wife bought about 30 pounds of it, cooked it into the most ludicrous forms imaginable, and invited their friends to a dinner in which all menu items, including the drinks, had bacon in them. Allow me to introduce you to Andy Kennedy Lageson. 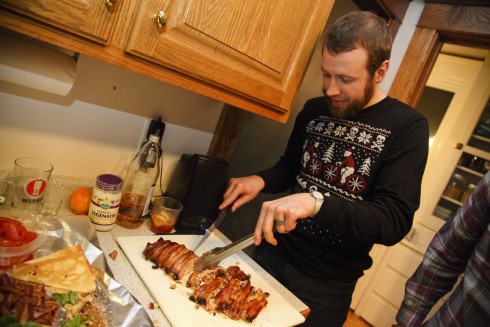 LL: What is wrong with you?

Andy: It was Molly’s idea. We have this thing we call Sunday Funday, where we invite a bunch of our friends over once a month. We always have some kind of theme. Molly thought we should do a “Twelve Days of Bacon” theme, like for Christmas, you know?

Andy: We thought it would be fun to put bacon in things where it didn’t make any sense to use bacon, like apple pie, and Jell-O. And lasagna. We invented all the recipes, except for the lasagna. We got that idea from these crazy guys from Quebec who have a show called Epic Meal Time. It was inspired by them, but we still made up our own recipe.

Andy: Instead of noodles we used White Castle burgers. We did layers of cheese, tomato sauce, and bacon. It was weird, because the burgers and bacon basically disappeared after we baked it. Tasted pretty good. It made about 20 pounds of lasagna.

LL: Did anyone die? 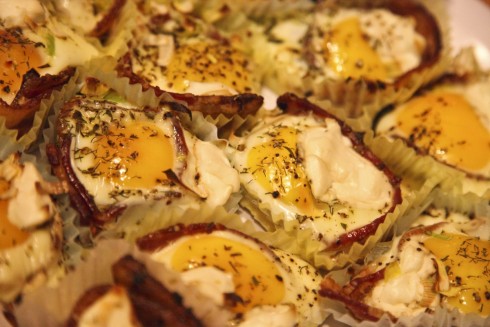 Andy: The appetizers were some normal-ish things like bacon-wrapped asparagus and other bacon-wrapped veggies. Then bacon on skewers, like chicken sate but bacon. We did a Jello-O mold where we threw in bacon bits and actual strips of bacon and some Jack Daniel’s. 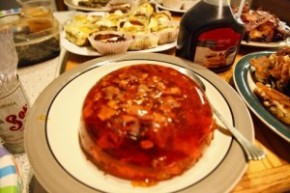 LL: Everything’s better with Jack Daniel’s, am I right?

Andy: Yeah, we made Old Fashioneds with bacon, too. Like a normal Old Fashioned — Jack Daniel’s, muddled maraschino cherries, 7-Up — but with bacon bits on the bottom and a bacon strip sticking out. People really liked the bacon strip garnish.

LL: Of course, who wouldn’t? 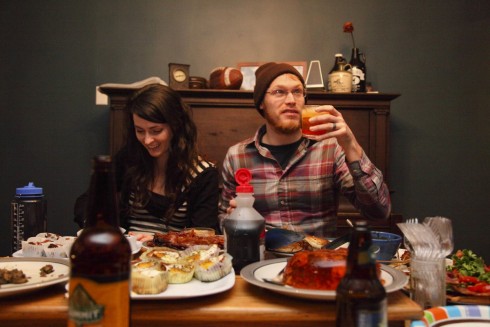 Andy: I had saved the bacon grease, about a gallon and a half, in a bucket, and it was sitting in the kitchen with a ladle sticking out. One guy thought it was a drink and ladled some into a shot glass and slammed it back. I was like, “Whoa, I didn’t mean for you to drink it!” That fad stopped pretty much as soon as it started.

Andy: One of the best dishes was the bacon-wrapped stuffed pork roll. We made a big rectangle out of ground turkey and pork, then piled on a cheese mix of ricotta, mozzarella, Parmesan, Colby, and some herbs. Added cheese-filled Lit’l Smokies, some Colt 45 and some Jack Daniel’s. Then we rolled it into a log and topped it with a glaze of brown sugar and Jack Daniel’s. And strips of bacon. 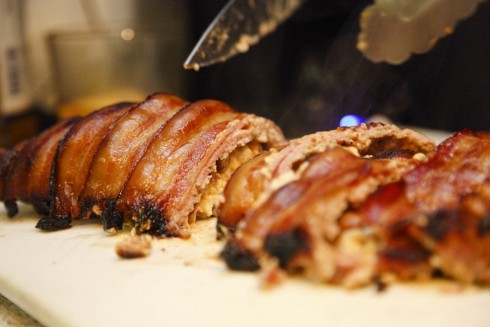 LL: Despite your unfortunate choice of ingredients, it sounds like you actually know what you’re doing.

Andy: I was in the food industry for about 10 years. I managed a restaurant called Italianni’s, an attempt at a chain started by the Carlson Companies. The one on Carlson Parkway died out about four years ago, and that was the end of my restaurant career.

LL: What did you do after that?

Andy: I ran a recording studio for awhile. Now I’m a sales manager at Dero Bike Racks. It’s an awesome job. I get paid to ride my bike to work. It’s a really great local company.

LL: Has your wife Mollly worked in the food industry as well, or does she come by her bacon-frying abilities naturally? 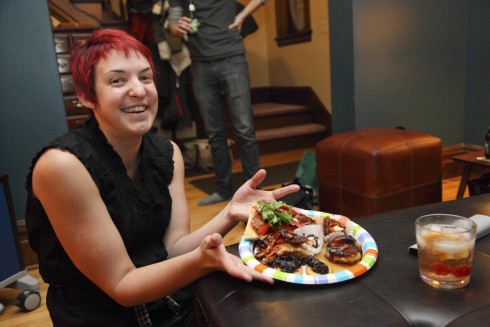 Andy: She’s just a good cook. She works for the Science Museum as a volunteer resources specialist. She’s also “Maulelujah #47” of the Violent Femmes, the best team in the North Star Roller Girls league.

LL: What was the most popular bacon dish at your ill-advised Sunday Funday?

Andy: The bacon apple pie, by far. It was amazing. We used a bacon weave for the bottom and top crust. First we baked the weave in the pie tin so it was about halfway done, then filled it with a mixture of bacon bits, apples, and Jack Daniel’s, then put the other bacon weave on top, and some brown sugar on top of that. I thought it would be disgusting, but it was great. I’d definitely make it again. 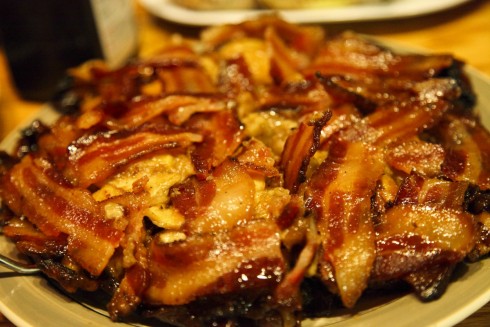 LL: Why in the name of Deuteronomy 14:8 do you like bacon so much?

Andy: The nice thing about cooking with bacon is that you don’t have to season anything. Bacon carries its own seasoning.

LL: Did anybody get sick at your party?

Andy: The guy who did the bacon grease shot said he didn’t feel good the next day. But nobody threw up.

LL: Don’t you ever feel sorry for pigs?

Andy: Kind of. It’s crazy though, because pigs are such disgusting creatures, and yet they taste so good. Molly decided she’s going to go for a year without eating any mammals. So this dinner was kind of her last hurrah. She’s lactose intolerant, too, so she’s going vegan.

Andy: Yeah. It hasn’t worked out so far.

LL: I will now recite a poem by Ogden Nash. 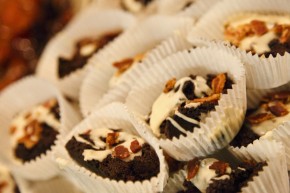 The pig, if I am not mistaken,
Supplies us sausage, ham, and bacon.
Let others say his heart is big —
I call it stupid of the pig.

LL: Nice chatting with you.