A few months ago, I wrote a piece about my desire to play on a local B’nai B’rith softball team. Word got out and now my Sunday mornings are spent beside the hot corner waiting for screaming line drives to head my way. 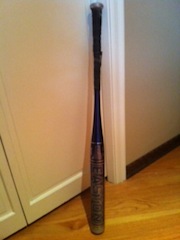 Joining an established team is always a difficult thing and the new guy has to prove himself (ideally sooner rather than later). Typically, a few hits or a few nice plays is all you need to become a member of the team. In my case, I brought along Purple Magic.

The story of Purple Magic begins at a local Sports Authority in Vernon, Connecticut. It was my sophomore year of college and I was driving back to Boston with my parents after winter break. It was only a few weeks away from the start of intramural softball season (you know, where former Little League stars go when their baseball careers are over) and I needed a bat. This was a serious intramural league and I needed to become a serious softball player. My baseball playing days (and baseball bat days) were officially over.

After spending about 20 minutes explaining to my mother why I couldn’t use one of my baseball bats to play softball, she relented and bought me my first official softball bat. Naturally, I wasn’t supposed to tell my dad how much it cost (about $90 I recall).

It was a purple Easton – perfect length and perfect weight. I was all set. Opening Day arrived and my new bat helped me to three triples (sophomore year playing weight: 175 pounds). Purple Magic was born.

Purple Magic was good to me for that season and the two that followed. She didn’t see any action until I took the reigns of the A&E Television Networks team a few years later. Purple Magic hit doubles in Central Park and Little League home runs (4-base errors) on Roosevelt Island. She traveled the 4 boroughs (Staten Island, come on) and did so with style. And she took it to HBO in the midst of their Sopranos arrogance – helping win the coveted Cable Positive Championship in 2004.

She moved to Minnesota with me and hit some rough spots with middling teams of misfits. It wasn’t looking good for Purple Magic. For a while, the magic was gone.

That brings me back to the present and my new team. Purple Magic was instantly welcomed and embraced. New, more technologically advanced bats lined the dugout, but hitter after hitter grabbed the magic. 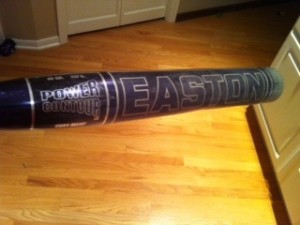 All banged up, poorly re-gripped, and with its better days behind it, Purple Magic had a few more games of life in it. My new teammates commented on the sweet sound she made – not like the new $300 models they said.

And then it happened – one hard foul ball to left and the faces in the dugout winced.

I looked at my dear companion and right there on the barrel, I saw the end: a dent.

Of course this is a Jewish league, so instead of “oh shit,” I said “oy gevalt.”