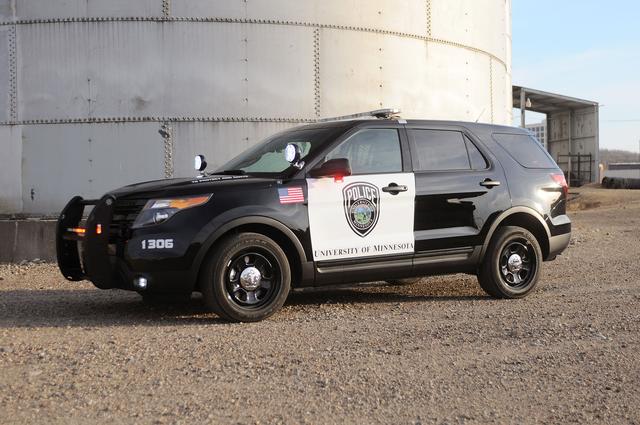 When Ford stopped producing the Crown Victoria last September, it marked the end of an era for police squad cars.

Now, police departments across the country, including the University of Minnesota’s, have begun replacing their old Crown Victorias.

Two weeks ago, University police put three new Ford Police Interceptor utility vehicles on patrol as part of a trial run to see if they have what it takes to become the department’s new standard squad car.

The new vehicles, similar to Ford Explorers, were chosen over other models released by Chevrolet and Dodge primarily because of their all-wheel-drive capability, University police Deputy Chief Chuck Miner said.

Until recently, most police cars have only had rear-wheel drive, so Miner said the addition of the all-wheel cars will allow police to operate effectively during snowy Minnesota
winters.

“We’ve had a few bad experiences in the past with snowstorms and officers not being able to get to calls with any expediency,” Miner said.

The model is also the first-ever Ford pursuit-rate utility vehicle for police.

The cars have an AdvanceTrac system that detects wheel slips and automatically applies the brakes. It also adjusts engine torque to avoid skidding and fishtailing.

The vehicles come with more improved safety features like a blind-spot alert system, a rearview camera and a sensor that alerts officers to unseen traffic.

For campus officers, Miner said, these improvements are especially important because they’ll allow for maneuvering in tight spaces while avoiding accidents with the many cyclists and pedestrians that fill campus.

According to Ford, the utility vehicles are also the only pursuit-rated police vehicle that passed a 75 mph rear-crash safety test.

The vehicles also feature QR barcodes on the rear tailgate, which can be scanned using a smartphone app to connect to the University police website.

Miner said the QR codes are a more current way to increase traffic to the website and are great tools for connectivity.

Police are also pleased with the additional backseat space for arrestees to sit, Miner said.

“As you can imagine, it’s not particularly easy for a handcuffed person to exit a car,” he said. “So this will make it easier to get prisoners in and out.”

Miner said the utility vehicles are only slightly more expensive than Crown Victorias.

“They are still less expensive than you or I would pay if we went to a dealership, though.”

Typically, market value for a Crown Victoria sits at about $28,000, while the new utility vehicles cost about $31,000, Miner said. The University Department of Public Safety’s budget covers the cost.

Miner said University police will continue to test the cars over the winter and then decide if they want to add them to the department’s 11-car fleet by spring.

If they choose to keep the cars, Miner said University police will order more and slowly phase out the remaining Crown Victorias.

Thus far, Miner said he has received only positive feedback from patrol officers.

“We’ll have to see if we still like them in a couple of months, but so far so good.”