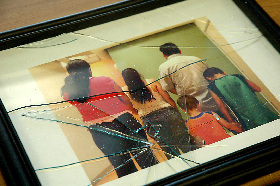 It was the 4th of July, 2005. Israel, Rosalía and their two children, Miguel Ángel and Christopher, enjoyed fireworks and Independence Day celebrations at the Veteran’s Park in Richfield. Amid the celebrations, Israel took Rosalía’s hand and silently prayed that he would be able to reach the American Dream. Things had gone badly from the beginning and the “American Dream” seemed more and more nightmarish. Still, Israel dreamed, and hoped. Little did he know that one year later he and his family would face a true nightmare.

Miguel Angel was a wide-eyed 3-year-old looking up at the fireworks. Christopher was still a baby. The family had spent the day together at a family barbeque. As they stood, watching the sky burst with color and flames, both Israel and Rosalia worried. They were both without jobs and money was becoming scarce. Rosalia wondered where the money for diapers and milk was going to come from. Israel had been waiting for his job to call him with new work for two long months.

Days later, he received a call. A temp agency wanted him to start work the next day. “Finally,” Israel thought, and accepted the job. Rosalia had not worked since her second pregnancy, which was very difficult. Unfortunately, Israel’s job was not constant and they still faced economic difficulties. At the end of April, they decided that it was time for Rosalia to go back to work. The kids were older now and with her wages the family could finally come out ahead. She found work with the same temp company as Israel at a job near Duluth, in Wisconsin. Her job was steady and Israel was excited, he could find a job in Duluth and they could start fresh.

A night to forget
After discussing their options, they decided to move to Wisconsin. They would rent an apartment and Rosalia would move first while Israel tied up some loose ends in Minnesota. On May 29, they decided to take Rosalia up. The owner of the temp agency drove them, as Israel had to sell his car to pay off some debts. They were late in setting off and at 10 p.m. the temp agency owner grew tired of driving and asked Israel to take over so she could get some rest. At 11 p.m., the car was pulled over.

The officer asked for identification and car registration. Rosalia gave her Matricula Consular, Israel gave them his license and the temp agency owner gave them her license as well. They were also giving a ride to a young Ecuadorian woman who had no identification with her, which is what she told the officer. The officer took the IDs and went back to his patrol car. Something felt wrong. They waited for 10 minutes, the longest 10 minutes of his life, says Israel. No one said a word as they waited.

The officer returned and informed them that he would have to detain Rosalia. Israel’s English was poor, and he could not communicate well with the officer. The officer asked Rosalia to step out of the vehicle, and she was handcuffed and taken away. By this time, the kids had woken up and were frantically asking where they were taking their mother.

The owner of the temp agency told Israel that they had been stopped because there was a problem with the car’s registration. The officer then returned and told Israel that he would have to be detained as well. He was handcuffed and led away, as was the Ecuadorian woman traveling with them.

The next day, June 1, they took a bus to Minneapolis and arrived early in the morning. The children cried and didn’t want to sleep. Israel was desperate and didn’t know what to do. The next day, Friday, he went out looking for help. He asked his friends for advice. He spoke with several lawyers, but all wanted to be paid for a consultation. Throughout the weekend, he kept looking for help and advice. Finally, Sunday night, with no money left and in complete desperation, he went to the immigration offices and asked for his voluntary departure so that he could leave the country with his wife. The immigration officials allowed him to do so and made him sign paperwork stating that he would voluntarily leave the country in 60 days time, or whenever his wife was deported. In the meantime he had to report weekly to immigration offices in Bloomington. His wife at the time was still in Duluth, waiting to be transferred to the Twin Cities. They spoke on the phone and wept together.

On Tuesday June 6, he had just contacted a lawyer who had agreed to see him on Friday. But on Wednesday morning, he received a call from his wife. She had been transferred to Bloomington and she was to be deported that same morning. Israel quickly picked up the children, who were staying with family members in Northfield and got some money together for Rosalia. He made the trip as quickly as he could, but by the time he got to Bloomington, it was too late. Her bus to the airport had already left. He and the children had not been able to say goodbye to Rosalia, and he had not been able to give her any money for her expenses once she got to Mexico.

Israel went immediately to a travel agency, but the travel agent said he could not take the children without the written authorization of their mother. He returned to his apartment, dejected. He had almost no money left and the apartment building manager had told him he had to leave by June 15.

That night, he spoke to Rosalia from Laredo, Mexico. A woman who had also been deported on that same flight had helped her with a little money so she could at least travel back to her hometown.

In the next few days, Israel moved frantically to get his wife’s permission to take the children out of the country. With the help of friends and some community activists, he was able to move out of the apartment by June 15 and gather a little bit of money. The permission was finally granted through the Mexican consulate and finally, 10 days after Rosalia’s deportation, the family’s nightmare came to an end as they were reunited in the small town of Huamantla, Tlaxcala, Mexico.

Epilogue of a nightmare
Israel and Rosalía’s dream began five years ago, when after leaving the university (Israel studied engineering in the Technological University of Tlaxcala), they decided to look for a better life. Both their incomes weren’t enough to pay for the basic bills and they were sinking deeper and deeper into debt. One of Israel’s uncles convinced him to come to the US. He told them that there were jobs available and that although the pay wasn’t great, it was still better than what they earned in Mexico.

Disappointed with the lack of opportunities in Mexico and facing the impossible task raising a family on their meager incomes, they decided to cross the border. They paid $1,500 each to a coyote to help them make it into California, where there were jobs supposedly waiting for them.

The Border Patrol captured them in their first three attempts and repatriated them. The guards who repatriated Rosalía the third time warned her that they had placed a deportation order against her to dissuade them from trying again. Regardless, they did, and on the fourth attempt they were successful.

The jobs supposedly waiting for them in California never materialized and the opportunities did not seem as good as they had hoped for. Israel’s uncle convinced them to come to Minnesota. Things were not much better here and the combination of Rosalia’s pregnancies and the shortage of work put enormous pressure on the family.

Rosalia’s deportation was in a way, a form of relief for Israel. He says, with regard to the time he spent in the U.S., “I have no desire to go back, after the way we were treated.”

The immigration system has pushed out yet another honest and decent family, two of whom are American citizens who will have to live in a world of reduced possibilities.

For Israel, who is now 30 years old, it will mean returning to a daily fight to provide for his family. For Rosalia, who is now 26, it means a return to a life without opportunities and with daily deprivations. For Miguel Angel (4) and Christopher (19 months) it means facing an unknown world.

The “American dream” lies shattered in the immigration offices and cells that have condemned them, like they have condemned thousands of other families to live through the new American nightmare. To resign all hope and to sacrifice the future of their children (oftentimes citizens) for the sake of a system that seems to have forgotten the words written in July of 1776 by Thomas Jefferson: “We hold these truths to be self-evident, that all men are created equal, that they are endowed by their Creator with certain unalienable Rights, that among these are Life, Liberty and the pursuit of Happiness.”