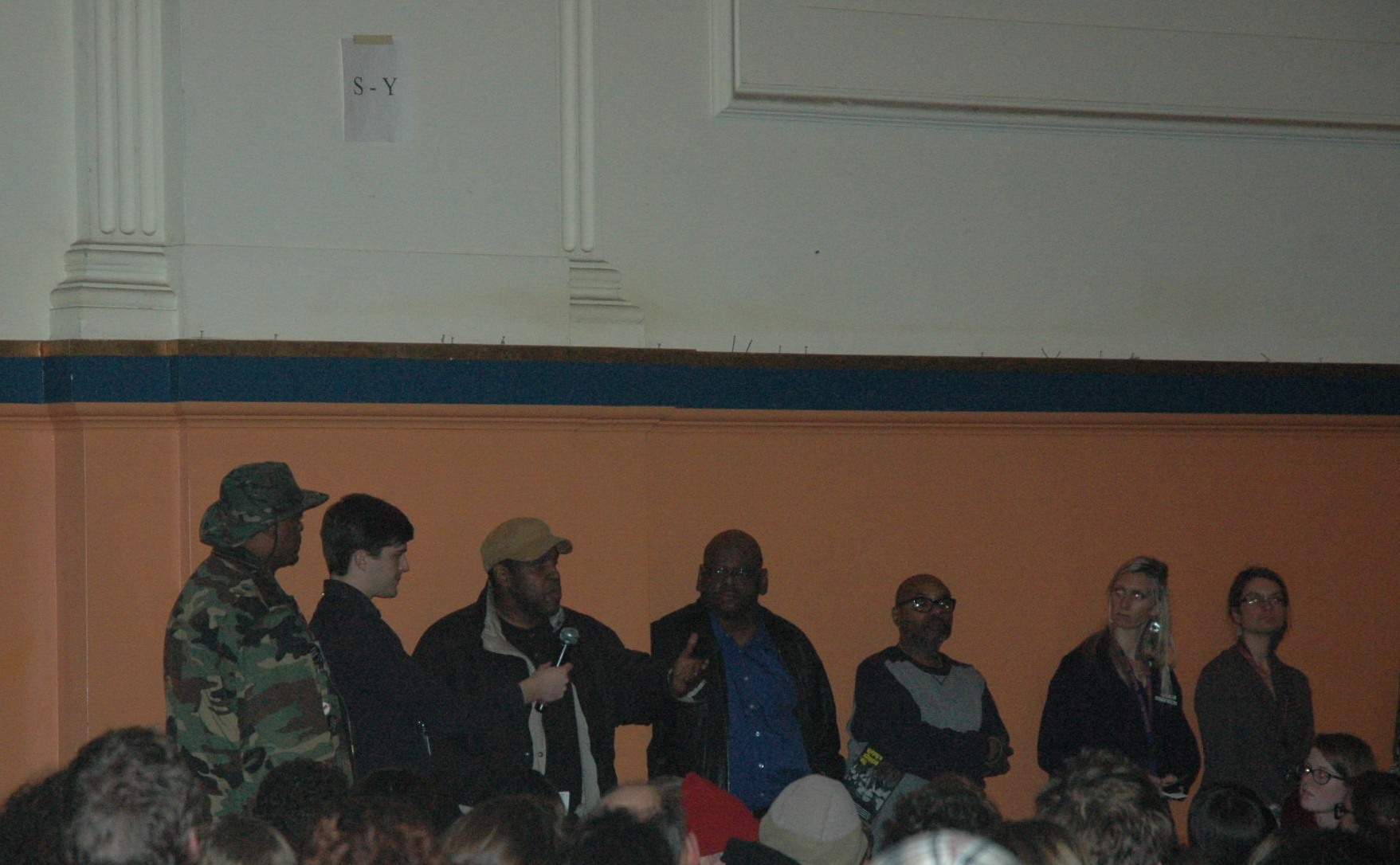 Hundreds of students, alumni, parents and community members packed Minneapolis Washburn High School’s auditorium Wednesday evening for a community meeting in response to the incident on Friday, January 11 in which a dark-skinned baby doll was hung with a piece of string. The emotional two-hour meeting included tears, impassioned speeches both about how students and parents didn’t want the incident to tarnish the image of the school and about how the school district needed to do a better job of teaching African American and Native American history. The evening also included calls for an apology, for healing and further conversation.

According to a fact sheet provided by Minneapolis Public Schools (MPS), staff of the school learned of the act after school after the incident on January 11 and immediately took action, and the school leadership held a staff meeting the following week. Letters were sent home to parents on Wednesday, January 16, but due to a technical error, the statement said, not all parents received it right away.

On Thursday, January 17, all after-school classes were cancelled due to “threats related to a meeting occurring that night late in the day on January 17,” according to the fact sheet. Robocalls were sent that evening.

Washburn principal Carl Markham-Cousins apologized at the community meeting on Wednesday, saying it was a mistake that parents didn’t find out until too late about the incident. “I stand before you and tell you the things I learned,” she said. Incensed, outraged, humiliated and angry that this incident would happen at Washburn’s diverse school, Markham-Cousins said that the school would take this situation and “do what we often do at Washburn High School- we are going to learn from it, we are going to grow strong from it.” According to Markham-Cousins, the community forum is just the beginning of a discussion about race and respect at the school and community.

MPS Superintendent Bernadeia Johnson also spoke, saying there were no “quick fixes” to healing after an incident like this.  Johnson herself grew up in Selma, Alabama where her family was involved with the fighting to obtain voting rights for African Americans.

Johnson said it saddened her personally to hear about the incident, and she felt it negatively impacted the entire community. While she has visited Washburn many times, and knows it to be an inclusive community, Johnson said this has been a time for “educating ourselves and moving forward from this.”

Before the discussion part of the meeting, two facilitators — referred to by their first names only, Jamie and Oscar — laid the groundwork for embarking on a restorative justice discussion.  They called on speakers to begin their speech with one word that expressed their core value.

Washburn students were allowed to speak first, and that part of the discussion lasted about 45 minutes. Many of the student speakers were very concerned about how the incident and the media attention would reflect on the school’s reputation. Some decried the act, but said it shouldn’t reflect the whole school, while a few students suggested that it wasn’t intentionally racist (one young woman even wrote poem about how the media misconstrued the truth).

Steve Kinney, president of the Washburn High School Student Government, said that with all the media attention, Washburn students want to show that the actions of four students do not reflect the “passion and love of Washburn students.” He hoped that the act wouldn’t destroy the school’s reputation or interfere with Washburn’s progress in creating college-ready students. “We cannot dwell on the acts that have consumed our public image,” he said. “This event has caused everyone to bleed orange and blue.”

A young woman named Lily said it was her doll that was hung up by a string. She had brought the doll in as a prop for the school play. She was heartbroken, she said, when she found out what had happened, but at the same time, everyone at the school is so welcoming and friendly, “I believe the people didn’t mean to hurt anybody,” she said. “I believe it was just an ignorant mistake.”

The majority of the students spoke of their love for the school. “There’s a lot of pain in this room,” said Austin Johnson. “But we cannot let this set us back as a school. We’ve grown so much. We have to keep moving forward. We are still Millers!”

Besides the overwhelming school spirit, though, a couple of students called for the perpetrators to apologize, and one student chided the other students for downplaying the significance of the act. “This is a big deal,” she said. “It’s 2013, are we really going back in time?”

The evening’s discourse got considerably more heated when it was the parents’ turn to speak. Al Flowers, who said he has a daughter who graduated from Washburn, said, “This is not a pep rally. We know you love your school. We want you to know your history so these kinds of things don’t happen.”

Another parent, who is a Washburn alumni, said she was afraid of letting her daughter come to school. “She may not be afraid, and God bless her for that,” she said. According to the parent, one of her daughter’s teachers persecuted her daughter for comments the parent made to the media.

MPS employee Ellen Shulman, who is also a parent of a Washburn student and graduate of Southwest High School, said when her son showed the picture of the doll on Twitter, he was nonchalant about it. “When he showed it to me I cried and was shocked and ashamed as a parent,” she said. Shulman said she hopes that her son learns from this experience, and she also said that as parents and community members, everyone should also listen to the students.

Another parent, Jillie Fergus, tearfully said, “to every person that was hurt by this, I want to say sorry for that. I’m sorry this happened to you. I’m truly sorry. I hope that we can move on.”

Roxxanne O’Brian, another parent, said she was born in California and spent the majority of her life in Minnesota. “We need to stop coming together only around suffering,” she said. “We need to — especially Black people — only show up every time someone white offends us. We also need to come together to build.”  O’Brian encouraged parents to talk to their kids about race and class. “Stop avoiding it,” she said. “That’s why we cannot go forward.”

The oldest person to speak at the meeting was an alumni who graduated in 1939. “Man, I’m so proud of this school,” he said. He reminded the audience that the school is an International Peace Site.

Activist Mel Reeves said students at Washburn should give themselves a hand. “You didn’t have to show up,” he said. “We don’t blame you all for the actions of a few. We understand that a few people did this.” At the same time, Reeves talked about how important it was for the students to understand that it was disrespectful. As an example, he asked what would happen if students hung a swastika at the school.

Reeves brought up incidents in Minnesota history, such as three young black men being hung in a lynching in Duluth. “Most of y’all may not be aware of that,” he said. “This is part of our history. That’s what we are concerned about.  You are our hope.”

Other stories on Washburn High School: