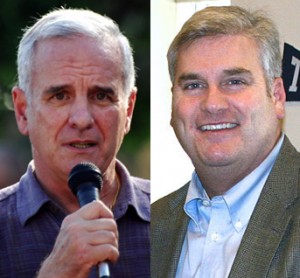 Republican gubernatorial candidate Tom Emmer released the final – and most anticipated – part of his budget plan Tuesday afternoon. The proposal tackles the key problem facing the state’s next governor: how to deal with the projected $6 billion budget shortfall.

The plan corrects the budget gap primarily by suggesting that a shortfall needn’t exist, arguing that almost all of the state’s projected growth in spending is unnecessary. Emmer’s proposal keeps most state expenses at their current level, raising spending only slightly to match the expected increase in state revenues.

Emmer zeroes in on the Minnesota Department of Human Services, noting that the projected budget calls for a 32 percent increase in its budget for fiscal year 2012-13. His plan calls for holding the spending in that area relatively stable, increasing it by only $650 million rather than the current projected increase of $3 billion. But beyond stating that figure, Emmer’s plan is vague on the details of which programs will not receive the funding they currently expect, only stating that he will “refocus spending on programs for children and seniors which have been historically underfunded.”

That lack of detail follows throughout all of Emmer’s plan. The proposal includes $500 million less for “Agencies and Other State Spending,” and he explains that he will cut bureaucracies that are “not fundamental” to the government. But what exactly are those unnecessary agencies? None are detailed in the plan.

Higher education will experience a drastic cut under Emmer’s plan; he proposes $300 million less than the last budget, where the projected budget included $100 million in extra funding. That news will likely be tough to swallow for Minnesota’s students. Tuition rose rapidly at the state’s colleges and universities over the last decade. In 2000, in-state tuition and fees at the Twin Cities campus of the University of Minnesota cost $4,649. For the 2010-2011 school year the school will charge students $12,288 in tuition and fees, and an estimated $23,058 when other expenses are included (those figures are significantly higher for students who come from other states, excluding Wisconsin).

Emmer’s plan does not detail how the cuts to higher education will be implemented, just stating that if elected, he “will be focused on redesigning and reforming our higher education system to meet the needs of 21st century student.” These cuts could cause colleges and universities to add more burdensome tuition hikes onto students.

The second part of Emmer’s budget plan dealt with K-12 education and detailed how he plans to fill a large chunk of the budget shortfall. During the last budgeting plan, the state shifted education funds to balance the budget. Democratic candidate Mark Dayton’s plan calls for repaying that money during the first biennium of the next governor, where Emmer plans to kick the issue down the road in his potential administration.

Businesses are about the only sector of the state that will see an increase of funding under Emmer’s plan. The first part of the Republican’s proposal, titled “Plan for Job Creation” detailed a number of business-friendly tax credits totaling over $600 million in the 2012-2013 fiscal year. At the same time, Emmer proposed cutting state funding for higher education by over 10 percent from its current level. His plan calls for a continual reduction on the corporate franchise tax until an eventual total repeal. The tax currently sits at 9.8 percent, and Emmer calls for reducing it by one percent during the first two years of his administration, getting to a 3 percent rate by 2015. He also proposes a reduction of the state general property tax and increases to the Research and Development Tax Credit.

Mark Dayton also revealed further information on his budget plan Tuesday. Where Emmer is all cuts to projected necessary funding, Dayton’s proposals have largely revolved around increasing state revenue. His overall plan calls for over $4 billion in new tax revenue to close the budget gap, with the heaviest burden falling on the state’s highest income earners. The plan calls for raising taxes on married couples earning over $150,000 a year or individuals earning $130,000. Dayton has said he would like to keep the top tax rate below highest in the country, which is currently Hawaii’s at 11 percent.

But based on figures the campaign released Tuesday, a Gov. Dayton would be unable to fill the budget hole with that plan. The Minnesota Department of Revenue ran the numbers and determined that only $1.9 billion would be raised during the next biennium if income taxes were raised to 10.95 percent for top earners. The Dayton campaign has stated that the report indicates they will need to find further progressive sources of revenue and budget cuts.

Until further details are released, each candidates’ plans are largely exercises in wishful thinking. Emmer’s cuts in the projected budget appear nice and tidy as large numbers distanced from specific programs, but when he is faced with raising tuition for Minnesota college students, under-staffing elementary school classrooms or cutting heath aid to the state’s indigent, the cuts will become far more controversial. His budget plan is filled with buzz words that play well to all political demographics, but the actuality of implementing these cuts to projected spending will prove difficult to push through either a Democratic or Republican legislature. A Gov. Emmer could very well end up staying true to his pledge of no new taxes, but with so many politically unpopular spending cuts, it is more likely that the state will pass down the responsibility of implementing no tax revenues to the local governments.

Dayton’s plan to soak the rich with minimal cuts to state funding will run into similar problems. Not only does the proposal draw in less than half the funds the Democrat initially projected, but attempting to obscure Minnesota’s tax rate – just barely below the highest rate in the nation – would likely run into difficulties when it is presented to the state legislature. Positioning the tax rate at just .05 percent below Hawaii’s highest rate in the nation would not stop Republican legislators from doing basic kindergarten math and rounding the claim so that the state would essentially become tied for the highest rate in the states. As politically popular as taxing the rich may be, Dayton will have to either accept a much higher tax rate than the rest of the country or raise taxes on more income brackets if he hopes to avoid drastic cuts throughout the state budget.