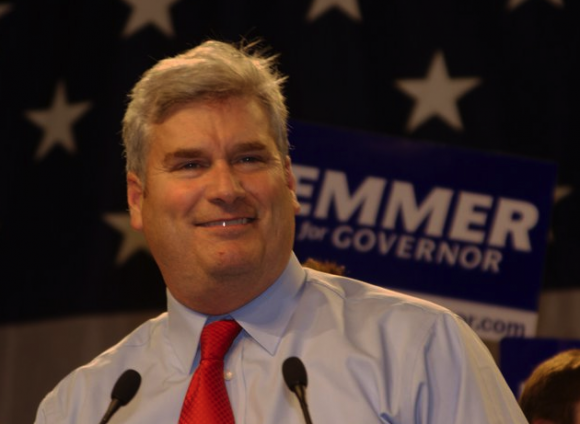 Using campaign finance and ethics boards to tarnish ideological and electoral opponents is a common practice on both sides of the aisle, but no candidate for governor has used the process more than state Rep. Tom Emmer. Over his six years in the Minnesota Legislature he’s sued, issued formal requests for investigation or filed complaints nearly a dozen times. Critics say he’s used the process purely for political purposes, although experts note it’s an effective strategy – so long as it’s used sparingly.

Last month the Star Tribune called Emmer “feisty” for the legal fights in his private life, but the Republican gubernatorial candidate has taken that “fiestiness” to the public realm as well. Emmer has filed four campaign finance complaints, two ethics complaints, two lawsuits and two formal requests for investigations. All have been dismissed – and none has resulted in punitive action against his opponents.

In November 2008, for example, Emmer filed two complaints with the Office of Administrative Hearings against his DFL House opponent Chris Brazelton. Both complaints were dismissed.

In the first, he complained that Brazelton, along with House candidate Jim Bakula, jointly disseminated false information about Emmer in campaign literature that attacked his vote for changes to the agricultural program “Green Acres” contained in an omnibus bill. Emmer’s campaign took issue with language in the ad that implied he wasted time looking for a fix for the program.

Judge Beverly Jones Heydinger wrote, “[Emmer] does not deny that he voted for the Omnibus Tax Bill. Instead he objects to the characterization that he ‘squandered months’ trying to draft a solution. Whether [Emmer] ‘squandered’ time is not something that can be proven factually true or false.” The OAH dismissed the complaint (PDF).

In another 2008 complaint, Emmer asserted that Brazelton and her campaign chair, Lorrie Adams, falsely accused him of wanting to “get rid of MinnesotaCare.” That statement was false, he charged, stating that he simply “advocated doing away with Minnesota Care and replacing it with a voucher program that would provide better benefits at a lower cost.”

Judge Kathleen D. Sheehy noted that Emmer named the wrong person in his complaint (PDF), but that didn’t matter, she implied, since he didn’t have much of a case.

The Complaint alleges no facts disputing the attribution as stated in the advertisement. Ordinarily, the OAH would dismiss without prejudice a complaint appearing to name the wrong party and permit the complainant to re-file a new complaint without payment of another filing fee. In this case, however, the materials provided by Emmer make it clear that, even if the correct party had been named, the complaint would not survive prima facie review.

“I was served the day after the election. And I lost, so it was like rubbing salt in the wound,” she told the Minnesota Independent. She believes he filed both complaints “just in case he lost, he’d have something to fall back on.”

The Emmer campaign did not respond to the Minnesota Independent’s questions about the complaints against Brazelton or those against other DFLers.

In 2006, Emmer filed a complaint, along with GOP chairman Ron Carey and Rep. Kurt Zellers, R-Maple Grove, against DFL Rep. Denise Dittrich of Champlin, alleging that she voted on Twin Stadium and Northstar rail issues without disclosing that she owned parking lot property near the new stadium. Emmer and his co-complainants said she was in a position to profit and had an undisclosed conflict of interest.

The campaign finance board shot down the complaint, however, determining that there was no evidence Dittrich ever owned property there (PDF). It noted that Dittrich’s husband had a small percentage stake in the property before the two married, however. At the time Dittrich, whose district the GOP was targeting, told the Star Tribune at the time that complaint amounted to “political bickering and mud-slinging.”

Also in 2006, Emmer took the lead role after then-Senate Majority Leader Dean Johnson was secretly recorded saying that a member of the Minnesota Supreme Court promised him the court wouldn’t hear a challenge to Minnesota’s laws banning gay marriage. Emmer filed a complaint with Board on Judicial Standards over the issue.

Johnson recanted his recorded statement, and the board found little to back up Emmer’s claims.

In a letter to Emmer (PDF), David Paull, executive secretary of the board, wrote, “[T]here is no evidence that any promises, commitments or predictions were made to anyone by any justice of the Minnesota Supreme Court concerning how any court might rule on any issue relating to the Defense of Marriage Act or any of the issues raised in Sen. Johnson’s remarks.”

Last year, when Rep. Paul Gardner, DFL-Shoreview, posted controversial remarks on Twitter – “Emmer seems to belittle his female colleagues (rage, sarcasm) on the House floor more than the men? Great face to the GOP?” and, “Why is Buesgens wearing sunglasses? Black eye?” – Emmer and Rep. Mark Buesgens of Jordan (now Emmer’s campaign manager) filed a formal ethics complaint against him.

Emmer has also called for investigations of DFL constitutional officers.

In 2007, following complaints about labor disputes in the office of Attorney General, Emmer was a lead figure in calling for an investigation of Attorney General Lori Swanson and filed a data practices request with her office. Ultimately, Legislative Auditor Jim Nobles determined that while the office environment may have been tense, there were no ethical of legal problems uncovered by his investigation.

In 2008, Emmer and Rep. Laura Brod, R-New Prague, sent a formal request to the State Auditor and the House Government Operations Committee to investigate Secretary of State Mark Ritchie for using a list of participants from a civics event for campaign purposes. Legislative auditor Nobles’ investigation cleared Ritchie of wrongdoing (but chastised Ritchie for a slow response to his inquiries).

Emmer was also among a slew of GOP legislators and several conservative interest groups that tried to sue Ritchie in 2009, alleging that he did not keep voter rolls updated in the 2008 election. But the Minnesota Supreme Court rejected the suit, finding that the plaintiffs “neither describe nor identify any wrongful acts, omissions or errors of respondents concerning a specific election as required” by Minnesota statute. It added that they requested “no relief specific” to the 2008 election, noting that even if they had tied it to the election, the window for contesting the election has passed.

He’s even sued the legislature.

Emmer, along with Buesgens, sued several legislative committees and the State of Minnesota (PDF) in 2008 over a per diem increase voted on by both the House and the Senate. Emmer claimed it violated the Minnesota Constitution’s ban on legislators voting for compensation increases that take effect during that session. Two courts, one in 1977 and another in 1997, had already ruled that per diem payments are not compensation in the sense meant by the constitution.

Emmer has also filed a complaint against a liberal think tank. In early 2008, Emmer filed a complaint with the campaign finance board alleging that Minnesota 2020 failed to register as a lobbyist. The complaint specifically named founder Matt Entenza as well as fellow Conrad de Fiebre.

The board said (PDF) from the evidence “it was clear that there were not sufficient facts to allege a violation of Chapter 10A. There is no Minnesota statute that provides for registration of lobbyist principals.” The board dismissed the complaint against Entenza’s group.

DFLers do it too

While Emmer leads the pack in the tally of complaints, he’s hardly alone. Entenza, now a DFL candidate for governor, was no stranger to filing complaints against the opposition in his position as House Minority Leader.

In 2000, Entenza filed an ethics complaint against Rep. Jim Rostberg, R-Isanti, who was charged with three counts of criminal sexual conduct after a minor accused him of inappropriate touching. But, the ethics complaint was also filed by then-House Majority Leader Tim Pawlenty and held until the case was resolved. Rostberg was cleared of two charges, but one charge was moved to juvenile court where he was forced to admit to some of the allegations.

Also in 2000, Entenza filed a complaint with the House Ethics Committee against Rep. Arlon Lindner who, from the House floor said a Jewish colleague held views of the “irreligious left” and then refused to apologize. A panel of three Republicans and three DFLers was deadlocked on the ethics decision.

Another candidate for governor, Margaret Anderson Kelliher, joined with Entenza and six other legislators in filing an ethics complaint against Lindner in 2004 after he said that gays and lesbians did not suffer persecution during the Holocaust and that gay rights would turn the state of Minnesota into “another Africa.” After outcry from LGBT, Jewish and African American groups, the same ethics committee was deadlocked on disciplining Lindner.

In 2001, Entenza filed a campaign finance complaint after a nonprofit group that advocates for personal watercraft issues said it organized to elect a Republican. The complaint was dismissed due to lack of evidence.

Prof. David Schultz of Hamline University says the strategy of  using the complaint process as a political tool “is more common than one thinks.”

“First, if the complaint has merit then it clearly dirties the candidate and it can be used again him or her,” he said. “Second, even if meritless, the complaint forces the candidate to answer the charges. This diverts the candidate from being able to take control of the political agenda, get their message out, or otherwise go on the offense and define themselves and develop their own political narrative.”

“Candidates who are on the defensive and who are defined by others seldom win,” he said. “Often times the public does not pay attention to a ruling saying the complaint has not merit. Damage is already done.”

But using the complaint strategy is not always a good idea.

“The downside is making it too obvious that the complaint is meritless,” said Schultz, in a reference that might apply to Emmer’s dozen unsuccessful complaints. “The worry is backlash. Unless the complaint looks totally frivolous, it probably does not hurt to file it and put the opponent on the defense.”