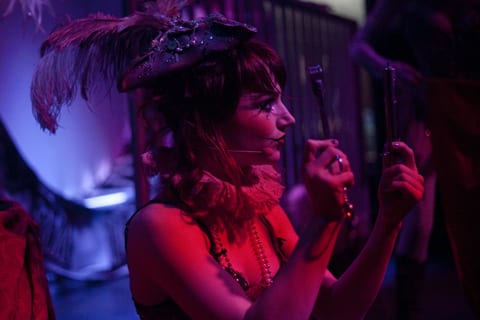 Wow. I really don’t know what to say about Emilie Autumn, who I saw perform at the Triple Rock on February 26. The whole experience was just… bizarre. The theatrical singer/violin player/burlesque performer seemed a good alternative for Oscar night, which I have successfully avoided in recent years. I don’t know much about her, except what I knew from the press release and what I found on the Internet. I tried to categorize the style of music in my mind before seeing the show- goth, burlesque, Victorian, musical theater-y. Mostly I was excited about the violin playing.

When I arrived at the club, I met photographer Amy Gee, a University of Minnesota grad who has been doing some freelancing and decided that the show might be fun. Neither of us knew exactly what to expect, except that it would be quite a show.

Indeed. As we waited in the rather extensive line, I was so curious about the young women who were all decked out in goth garb, complete with eyeliner bodices and lace. “People still dress like this?” I thought. I guess they do, or perhaps they were just doing it in the spirit of the show.

Autumn performs with three backup singer/performers called “the bloody crumpets.” They all were wearing impossibly tight corsets with their lingerie showing underneath, elaborate wigs (Autumn herself sported a Mohawk), feathers, and the like.

The set consisted of a gigantic clock that at times acted as a shadow screen, which had a ladder around it so that the girls could climb to the top of it. There was also extensive use of props (teacups, a giant red flag, swords, and muffins) which were thrown into the audience.

The whole thing was rather like a Broadway musical, or actually a vaudevillian act. The setting was an asylum, where lovely and disturbed young women were locked up, and sometimes auctioned off. They were suicidal, of course, and thirsty for blood. They also enjoyed making out with each other and women in the audience, which happened in a game near the end where four lucky women audience members got to smooch with Veronica, one of the bloody crumpets.

What was amazing to me was how many people in the audience (not a huge crowd, but still sizable) knew the lyrics to so many of the songs. Emilie clearly has a strong and loyal following here in Minneapolis.

I was kind of disappointed that she didn’t play the violin more. Autumn has a good voice, but for all the build up that she was this steam punk violinist, I would have liked to have seen her play more than one song. Oh well. The songs were quite catchy, I’ll give her that.  A little Andrew Lloyd Weber-esque, but that’s cool, if you’re into that.

I guess for most of the show I just didn’t know what to make of it. It just seemed so over the top, with all the muffin and water throwing (I was worried for Amy’s camera), fan dances, and hyperbolic lyrics like, “I want to mix the blood and put it in the ground so you can never leave.”

It was near the end, though, that she kind of won me over. She dropped the shtick a little bit. Well, she didn’t really drop it, but she spoke to the audience in her real voice. It was a relief, honestly, because it was an admission, in way, that it’s all an act. It’s just a show—whatever, have fun.

She also commented on the make-up of the audience, saying that there was no “target audience” for her show. She was right that there were people of all ages—both men and women—who really were into the music and the show. There’s something appealing about it for sure—a rebellion against the psychiatric industry, the norms of what is “crazy.” Beneath all the façade and theatrics, there’s a message in her lyrics about being labeled and controlled. Of course, there’s also a lot of T and A. 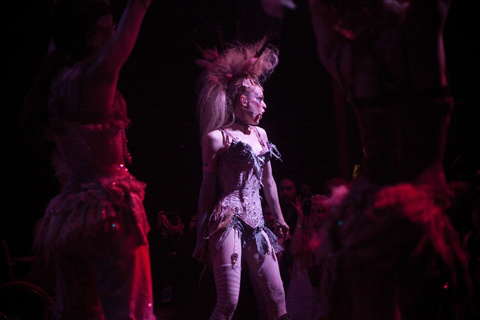 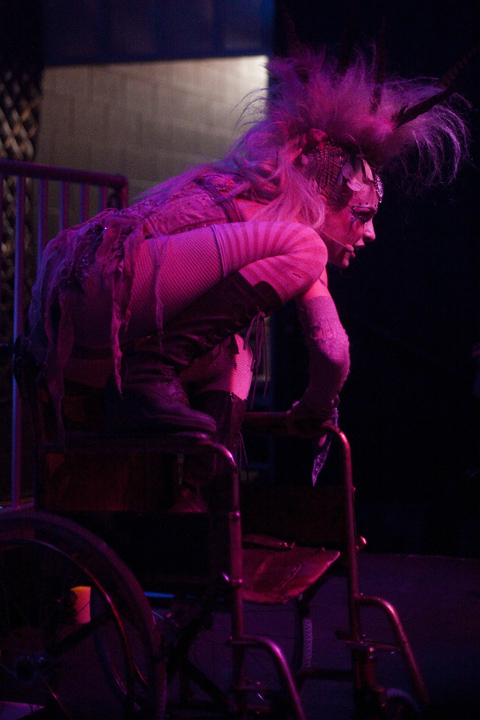 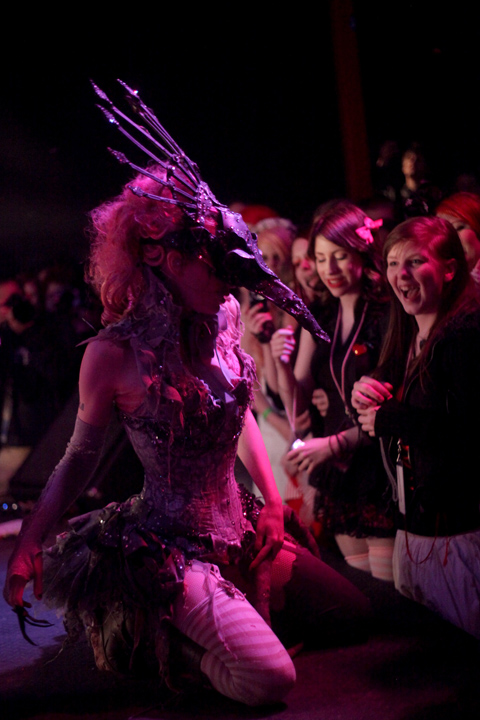 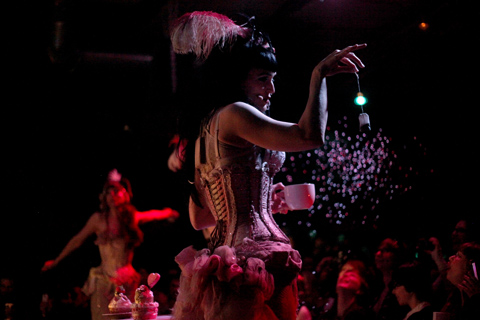 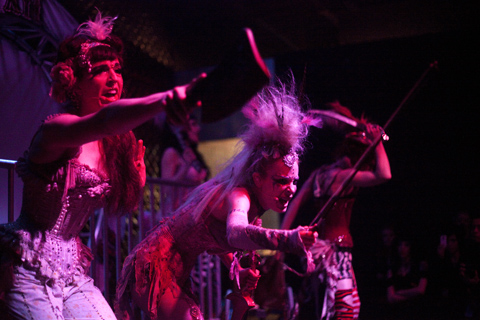 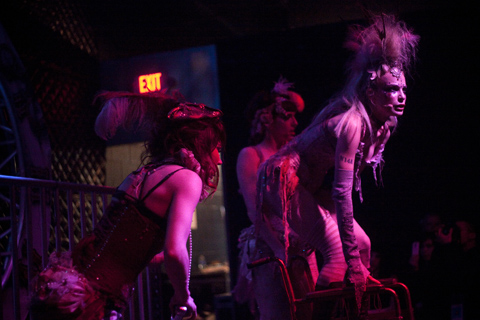 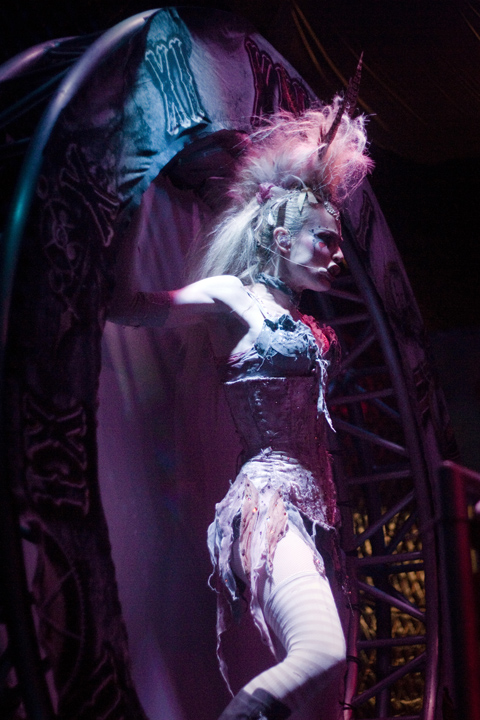 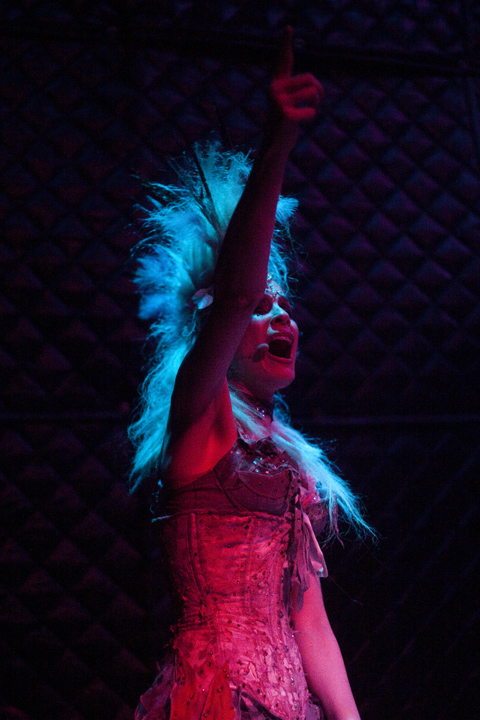 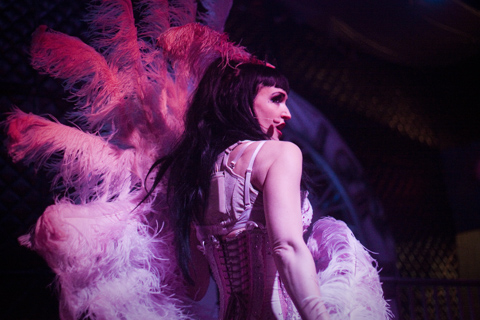