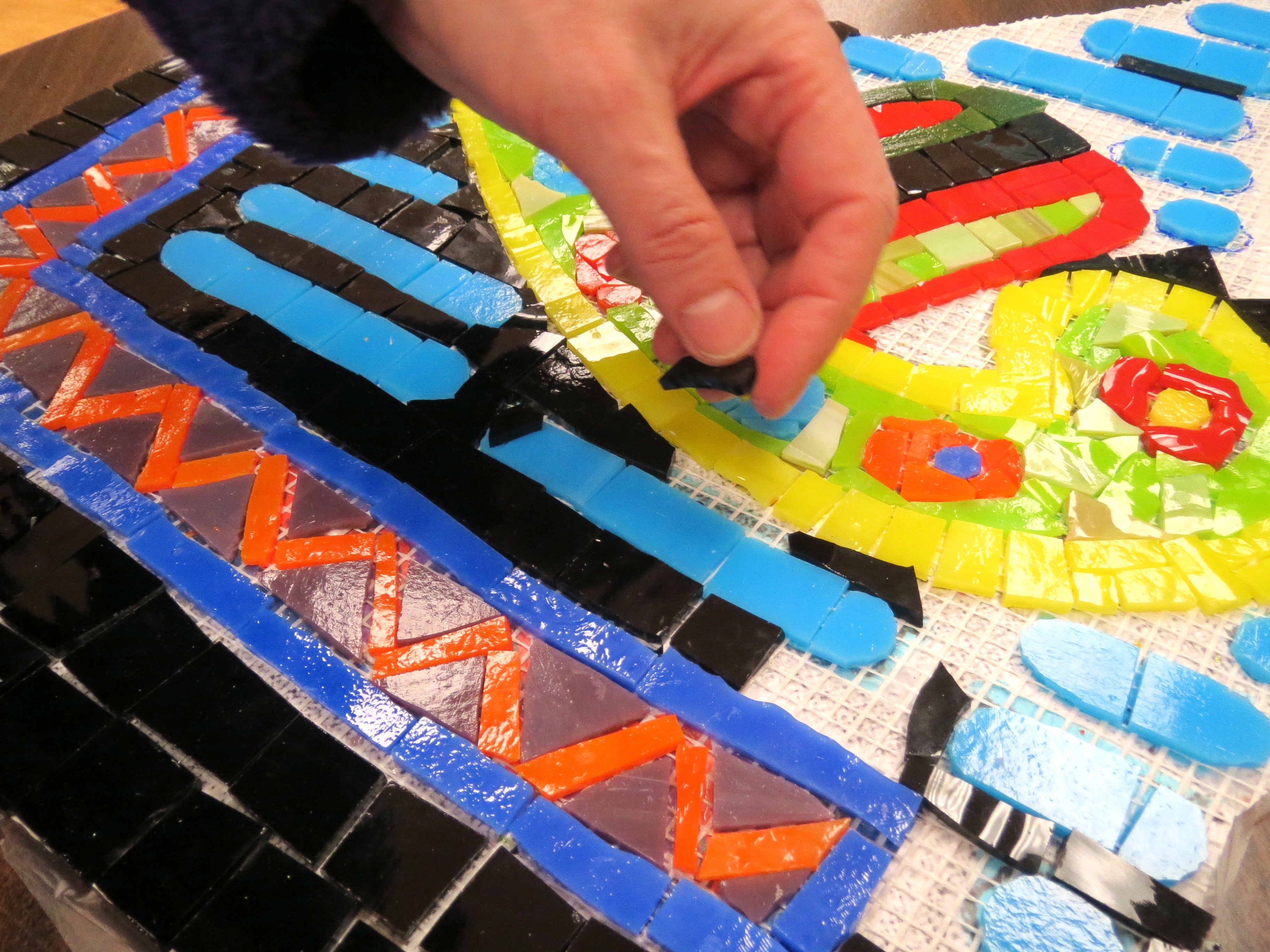 A volunteer adds a piece of cut glass to a mosaic-in-process. The glass pieces are glued onto a fiberglass mesh backing. Later the mesh will be attached with mortar to a firm backing board.

I am not the craft-making type. I am a klutz, with an X-Acto blade scar on my thigh to prove it. I agreed, however, to be an embedded journalist–on hand to observe, not to participate–in a public art project in south Minneapolis called the Mosaic Quilting Project.

Mosaics are made of little pieces of cut glass, arranged to make a picture. Glass is dangerous. Ancient people made arrowheads out of glass, and modern people hit each other with beer bottles.

“We don’t eat at the tables where we’re gluing down the glass pieces,” one of the mosaic project coordinators, Mary Ann Schoenberger, told me. “We don’t want to spill on the mosaic, but we also don’t want anyone to swallow any glass.”

Schoenberger is the director of the Southwest Senior Center. Along with Sarah Linnes-Robinson, director of the Kingfield Neighborhood Association, she recruited more than 300 volunteers to make the mosaic. At community workshops, they cut and glued thousands of bits of glass. The volunteers ranged from 3 to 94 years old and spoke languages including English, Hmong, and Spanish.

Some even speak mosaic. Three year old Milo, the son of artist Sharra Frank, who designed the mosaic, came to many workshops. One morning he woke his mother up, patting her face and saying, “Mommy, you’re so pretty and sparkly….”

Frank based her “pretty and sparkly” glass designs on fabric arts of different cultures. The ten 4’ x 4’ panels will be permanently bolted onto the outside of the recreation building at the Rev. Dr. Martin Luther King Jr. Park. “It’s a visual way of saying all are welcome here,” Linnes-Robinson said.

The public is invited to view the completed mosaic quilt on Saturday, April 27, 2013, at MLK Park, 4055 Nicollet Ave. S. The celebration starts with free food and music at 1 p.m., followed by the grand unveiling at 2 p.m.

I attended a workshop in February, on the invitation of the Southwest Senior Center. A dozen or so of the most experienced volunteers were fine tuning the almost-finished mosaic panels.  They worked at round tables that during the day host everything from lunch to Brain Games for seniors. The ergonomics weren’t great, and some volunteers had stacked two chairs on top of each other. The resulting higher seat gave them a longer reach at less cost to their backs.

Safety glasses on, workers cut and shaped the glass. Glass cutters look like sheers with tiny pizza cutters for blades. The uncut sheets of glass look as smooth as cake frosting. I touched them. Their edges were sharp.

Mosaic making is not dangerous, Lori Olson said, as I watched her apply Tacky Glue to a bit of glass. Or difficult. “The key is, you can’t be intimidated,” she said, pressing the glass onto a piece of fiberglass mesh. She was finishing a swirling pattern called the Elephant Foot, from the Hmong people of Southeast Asia. “The whole beauty of the project is that people of all ages and skills can do it. It’s okay if it’s crooked: it’s a crazy quilt.”

One of the “glass quilts” is, in fact, a Crazy Quilt design. This is not a formal pattern but, rather, a way quilters from a variety of cultures use up irregular scraps of fabric.

A pleasing jumble of colors and shapes, the Crazy Quilt is a fitting metaphor for the mosaic project. The project arose, in part, out of a dispute over plans to establish an off-leash dog area at Martin Luther King Jr. Park, in the Kingfield neighborhood more than a year ago.

Sarah Linnes-Robinson, director of the neighborhood association, was present for heated meetings about the proposal. To many elders of the African American community, the idea of a dog park in a place named for Dr. King was all wrong. It called up memories of police setting their dogs on black protestors during the Civil Rights era. Many younger, white proponents of the dog park didn’t see it that way and were reluctant to give up their vision.

Eventually another site was found for the dog park, and a neighborhood group called Building Bridges formed to talk about race. After all, Linnes-Robinson said, “How can we create a sense of community if we don’t understand where other people are coming from?”  With the Martin Luther King Legacy Council, they sought to find a fitting way to honor Dr. King and to bring neighbors together.

In the conversations that followed, Linnes-Robinson said, “the quilting metaphor came up over and over. All the cultures of the neighborhood have some kind of quilt or textile traditions.”

Meanwhile, the Senior Center, which had already hosted two mosaic projects, was thinking about doing another. Quilts and mosaics “looked like a perfect fit,” Linnes-Robinson said. Grants from the Metropolitan Regional Art Council and the City of Minneapolis made the Mosaic Quilting Project possible.

“The process is rewarding in its futziness,” volunteer Mark Yeazel said. Darrick Hills added, “and if you do a piece and it’s not really that great, someone else can come along and make it better.”

Encouraged, I decided to give it a try. Only tricky bits were left at this stage, however, and the trickiest bits of a mosaic are the curves. It took me half an hour to shape the round end of one bird feather. It was part of a design based on a mola–a textile art form of the Kuna people of Central America.

I came back two weeks later. Volunteers had in the meantime attached the glass-loaded mesh pieces onto firm backing boards, with mortar. The panels were waiting for the final step: grouting. Schoenberger delivered a bucket of gloppy black grout to a table, where the mola panel I’d worked on lay. “Plop it on,” she said, and three people in blue medical gloves proceeded to spread the gritty stuff all over the glass.

“This is when the magic happens,” Schoenberger said. Once the spaces between the glass were filled, the workers began to wipe the grout off with sponges and to buff the surface with torn up T-shirts. Emerging from the gunk, the fragmented glass pieces now formed a unified picture. Out of many, one.

I looked closely at the big bird. I found the blue rounded feather I’d worked on. It seemed, however, that my work had been found “really not that great” and someone had indeed come along and made it better, because I couldn’t find any of the glass bits I cut.

But, wait. That distinctive sliver of glass? I was sure it was mine.  Thousands of pieces of glass, and I was responsible for that one.

“Look! Look!’ I said. “I did that!” I pointed out my contribution to the people around me, the ones who’d been there all along. They smiled kindly.

For further information about the unveiling or about other programs and activities at the Center, contact Mary Ann Schoenberger, Southwest Senior Center Director at mschoenberger@voamn.org or 612-822-3194.  The Center is located at 3612 Bryant Avenue S. and serves people fifty and up through its social work, exercise, senior dining, nutrition, wellness, and health and educational programs.

The mission of the Kingfield Neighborhood Association is to demonstrate and encourage neighborhood leadership, provide a forum for community participation, and a structure to promote the vision and aspiration of the neighborhood. In everything the organization does it strives to connect neighbors to each other in an effort to build a stronger community where together neighbors work to address real issues, as well as create a unique, fun, vibrant and safe neighborhood and City.  For  further info on KFNA contact Sarah Linnes-Robinson Executive Director at 612.823.5980 or sarah@kingfield.org.

Volunteers of America–Minnesota’s  Southwest Senior Center and the Kingfield Neighborhood Association organized the project. Minnesota’s voters made it possible through grants from the Metropolitan Regional Arts Council (thanks to a legislative appropriation from the Arts and Cultural Heritage Fund). The City of Minneapolis Innovative Graffiti Micro-Grant also supplied funds.