Several weekends ago, there was a streets.mn Board Meeting on the East Side of St. Paul. Deep, deep on the East Side of St. Paul. I took a Route 17 bus from my neighborhood into Downtown Minneapolis, transferred to a Route 94 bus to Downtown St. Paul, transferred to the Route 74 bus to my destination, and did the reverse to get home. To the best of my knowledge, I was the only person who took public transit to the meeting. I believe two people biked. Three were absent. The remainder, presumably, drove. Names will not be named*.

I understand the motivation to drive–it was a long bus ride from Minneapolis, where many of us live. I probably spent over three hours (round trip) engaged in some form of transit, which was tiring after having spent the morning at Krav Maga, though I did get a ride to that. For a moment, I was the last man alive in Downtown St. Paul after dark. This seems like a good way to frame something I’ve thought a lot lately: Taking the bus is often embarrassing.

And it shouldn’t be! I, personally, don’t care that much in situations where I’m by myself. Proof: One time, I took the bus to the Blue Line to MOA and walked across this to IKEA to buy a chair and then brought it back home.

But occasionally it’s no bueno in situations where you have you have to interact with other people you know, e.g. your family is visiting from out of town, or an event has a specific start time and you have to arrive twenty minutes early and walk around the block a bunch of times so you’re not that guy who shows up twenty minutes early. There’s this tenseness, where an event ends and you know everyone else drove, and then you have to walk out and stand at the bus stop while everyone drives past you. Often, people from said event will slow down and offer you a ride, and you have to convince them that you’re on board with standing there on the side of the street, or accept their offer and feel like a freeloader. This isn’t as much of an issue at, say, Lake and Lyndale as much as it is further out in the city, and especially in the suburbs.

This, however, is not in the suburbs: 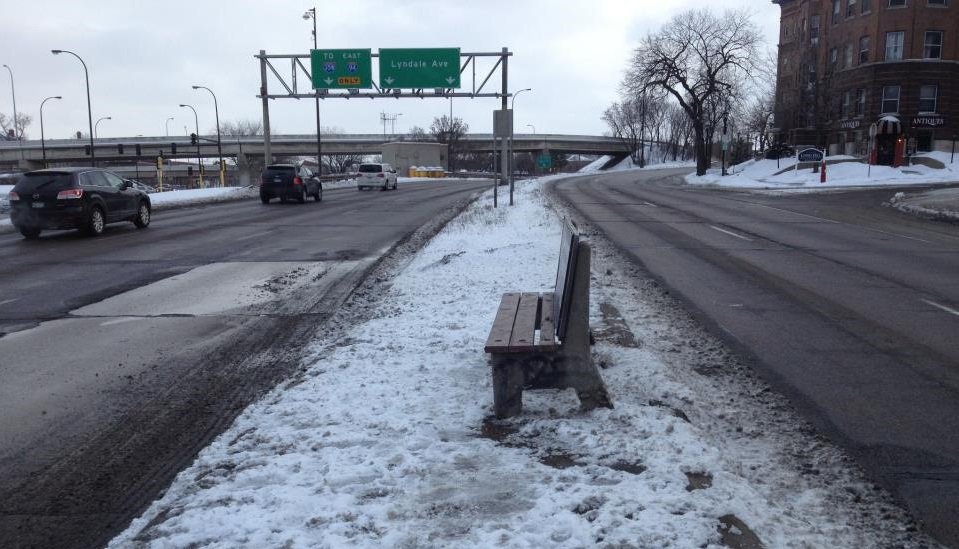 This is unfortunate. There are many other examples of crummy basic transit facilities that I haven’t taken pictures of. Is the whole premise of this post tone-deaf white middle class fashionable angst over most of my friends having cars? Perhaps. But I can’t shake the feeling that many of the expensive transit improvements we get in the Twin Cities are thought up by people who don’t actually use transit. Which is why we end up with Northstar, the Red Line, and so on. And lots of unsolicited advice about transit comes from people who don’t ride transit, e.g. “duh, why dont they built choos on highways like in chicago?? ?” from StarTribune commenters who also happen to be voters within CTIB’s taxing authority, so, you know, lose/lose there.

I guess I would be very curious to know how many local policymakers and planners actually use transit on a daily basis. At the moment, the status quo is to do stuff like spend $1.5 billion on a rail line that minimally improves mobility while at the same time ignoring basic, cheap user experience improvements. We’re making some progress with the trendiest things–lots of new bike facilities, fancy streetcar proposals, and the like. And a receptive Hennepin County looks to be serious about making Washington Avenue more than a car sewer, which is great considering where their transporation department is located.

Cam Winton, bless his heart, made a lot of good points during his campaign for mayor about what kind of bus service improvements we could get for $200 million dollars, which is the beginning of what we’ll spend on a maybe worth it, maybe not streetcar on Nicollet Avenue. Certainly building a streetcar would go along way towards decreasing the stigma of, coincidentally, going about as fast as a bus goes–which leads me to the conclusion that streetcars are the kind of transit investment championed by people who don’t use transit.

What percentage of our region’s transit movers and shakers have waited for the Route 5 bus at Nicollet and 7th Street in Downtown Minneapolis on a cold, windy January day and taken it anywhere? Or, one time, given their own bus driver directions? Or stood at the Uptown Transit Station with their little sister, visiting from the suburban East Coast, for a transfer to a Route 6 bus that is never, ever on time? We should find out. The bus is the way that the vast majority of Twin Cities transit users experience the system, and while unabashedly unsexy, it’s important.

P.S./Disclaimer: I actually had the idea for this post a while ago and I promise it isn’t a giant passive-aggressive complaint that no one offered to drive me home.