Some homeless young people are finding that making T-shirts and building bird feeders can provide a path to a brighter future.

That’s not to suggest that Elpis Enterprises (Elpis means hope in Greek) thinks it can somehow solve the youth homelessness issue all by itself. It’s too big and complex a problem.

“On our best day, we help homeless youth understand what it takes to hold down a job,” said Paul Ramsour, executive director of the nonprofit organization. “And in the process, they have a chance to redefine themselves.”

In a one-time mattress factory that’s being redeveloped at 558 Vandalia Street in St. Paul, just north of I-94, young people earn what for many is the first steady income they have known. 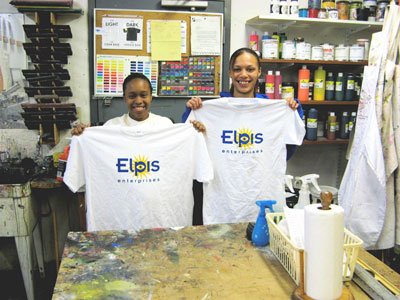 Homeless young people come to Elpis as referrals from either the Youth Opportunity Center in Minneapolis or Ramsey County’s YouthLEAD program. 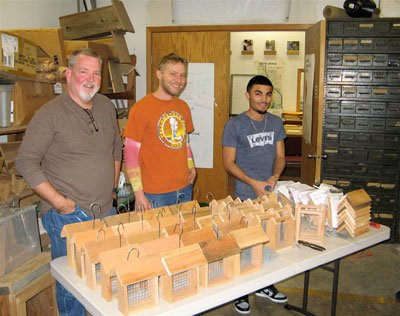 Estimates vary as to the numbers of homeless youth in Minnesota, in part because they can tend to go unnoticed. An Amherst H. Wilder Foundation study in 2012 counted nearly 1,200 people under age 21 as homeless in Minnesota on a given day, but acknowledged that was undoubtedly a low figure.

“Many of the youth we work with have low self-esteem,” Ramsour noted. “In some cases, the people they depended on have told or showed that they didn’t care about them.”

Shadaria Brown, leader of the woodworking program, came to the Twin Cities from Illinois several years ago, mostly staying with friends and sleeping rough on several occasions.

Lashay Declerq-Ransom, who coordinates screenprinting, started running away from home when she was 13, sleeping in cars and abandoned houses.

From 15 to 20 such young people are employed in Elpis’s six-month program annually and can advance through promotions and pay increases. Just showing up on time is a big hurdle for some of them, according to Josh Hosterman, Elpis operations manager. Most have never made anything with their hands before. They also learn about teamwork, use of computer software and customer relations, things that may be completely new to them.

“We’re helping them find a path for what may be a long journey,” says Hosterman. “They’re learning how to learn.”

Added Declerq-Ransom, who intends to study nursing at Minneapolis Community and Technical College, “It’s so important that they help the people that come here look for their next job.”

She alluded to the fact that Elpis graduates aren’t just sent off on their own when they’ve finished the program. Hosterman works with each to develop a plan for what’s next, whether it’s an education track or in the job market.

But in the meantime, Elpis is a haven of sorts for those who so need one.

“On the outside, you’re constantly reminded that you’re homeless,” said Shadaria Brown. “In a way, this becomes a home, at least for a while. I don’t know where I’d be without Elpis.”

Learn more about Elpis Enterprises and view the products offered in its online store at www.elpisenterprises.org.

Roger Bergerson writes about history and Bugle-area news from his home in the Como Park neighborhood.