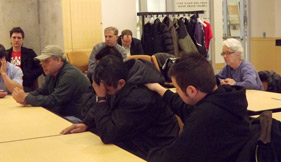 Weeping, with head in hand, Emilio Miranda Rios, is consoled as he tells of his struggles to survive off of working for the minimum wage of $7.25. (Photo by Harry Colbert, Jr.)

The U.S. Department of Labor and US Rep. Keith Ellison (MN-05) hosted a roundtable discussion to support raising the federal minimum wage.

The acting deputy administrator for the department’s Wage and Hour Division, Mary Beth Maxwell, and Ellison are advocating for raising the federal minimum wage from its current rate of $7.25 per hour. Ellison is pushing a bill that will raise the federal rate to $10.10 an hour. Maxwell said President Obama has suggested a raise to at lease $9 per hour. Ellison and Maxwell were joined this past Monday (Mar. 25) at the Minneapolis Central Library by advocates and local Hispanic workers, who shared stories about how they struggle to make ends meet while surviving on the current minimum wage.

“In my opinion, we need to link the minimum wage to the (company’s) executive wage,” said Ellison. “If a company is doing well, everybody with the company should be doing well.”

Maxwell is part of a team of deputies within the Department of Labor who have been dispatched to 20 cities throughout the U.S. to hear from adult workers who currently earn the federal minimum wage. It is estimated that 15 million workers make minimum wage.

“It’s important to hear from you (workers in the room) and to understand what life is like for you living on minimum wage,” said Maxwell.

What she and Ellison heard were stories of struggle, hardship and despair.

“I don’t make enough to pay my bills,” said Lucilia Dominguez. “I had to give up my apartment and I moved in with other people to make ends meet. I’m living paycheck to paycheck.”

Rios told the Congressman and the labor deputy a tale of working two cleaning jobs, one with a company contracted to clean K-Mart stores and another with Home Depot. According to Rios, he worked seven days a week and earned between $7 and $8 an hour. Rios said neither of his jobs offered medical benefits. He said things went from bad to worse this past September when he suffered a work-related back injury.

“I wasn’t able to get healed because (going to the doctor) was very expensive, so I missed three months work,” said Rios. “I was waiting for worker’s comp. to pay for bills but the company didn’t want to allow it, so I didn’t get treatment.”

Rios said eventually he contacted an attorney and began seeing a doctor.

“The doctor said had (my back) gotten treatment early, the injury wouldn’t have progressed,” said Rios.

While battling his employer to receive worker’s compensation, Rios said his economic situation went from bad to worse. He said things got so bad he begged his doctor to say he was fit to work even though he was not.

“My wife and I live with another family to afford the bills,” said Rios, tearfully. “That’s what it’s been like since we’ve come to this country.”

“Your story is all too common,” said Maxwell. “People in this country who do the right things and play by the rules shouldn’t have to struggle this hard. It’s just wrong that people are working this hard and can’t find jobs with decent wages.”

Blanca Jimenez, who works cleaning a local K-Mart store said years prior she was making a livable wage, but in recent years she has been forced to work for much less or face not having employment at all. She said just a few years ago she was making $12 an hour, but today she makes $7.25 an hour and works seven days a week.

“Now these companies are treating us like merchandise and we’re half off,” said Jimenez. “We’re not disposable, we’re people. We have families to support.”