If further federal cuts, known as sequester, are to occur, Dillon is forecasting a bleak future for those who could be dropped from Head Start, the federal preschool educational, health and nutritional program for disadvantaged children. The 43-year veteran of the program said Head Start in Hennepin County is already in a dire predicament. 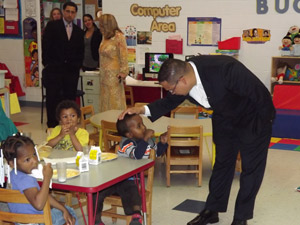 “Keep in mind, even prior to the sequester, we had 1,000 parents who were trying to get their children into the program (but could not access the program due to a lack of funding),” said Dillon. “Why this country should balance the budget on the backs of the poor and vulnerable children is beyond me. It’s shocking and appalling.”

With Fraser Head Start as the setting, 5th District Democratic Rep. Keith Ellison called on his fellow members of Congress to end federal cuts that he said are impacting the most vulnerable such as small children and the elderly. Ellison toured the Fraser Head Start program, 700 Humboldt Ave. N., to highlight how federal budget cuts are hurting Head Start programs all over the country and other services for the poor. According to the Congressman, Dillon and Head Start Director Rico Alexander, as many as 90 Hennepin County pre-kindergarten children will be kicked out of the program and 14 to 15 staff will be let go without an end to the sequester.

Ellison, co-chair of the Progressive Caucus, said he too is appalled at the inaction of the Republican-controlled Congress to end the sequester. 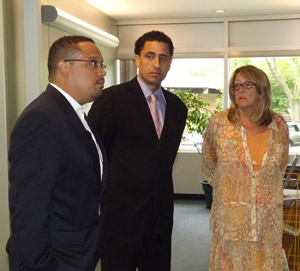 Left: Rep. Keith Ellison, Parents in Community Action (PICA) Head Start Director Rico Alexander and PICA Head Start Executive Director Alyce Dillon gathered at Fraser Head Start, 700 Humboldt Ave. N. to discuss affects of the sequester on Head Start programs throughout the nation. According to the trio, Hennepin County Head Start would be forced to kick 90 children out of the program and lay off 15 staff if Congress does not enact additional funding for the program.

“A core function of government is to make sure that small children have a good education,” said Ellison. “But for some people in Congress the cuts in government spending mean they can cut taxes for the better off and well-to-do. They don’t think government has a responsibility to the poor. I’m here to put a human face to the consequences of sequester. Some of the kids in this facility are coming from a shelter to begin with. That makes this facility even more important for these kids.”

According to Ellison, Congress demonstrated its distain for the poor when it chose to furlough cuts to the Federal Aviation Administration (FAA). Though Ellison is not opposed to FAA funding cuts, he feels there are other crucial services that should also be spared the ax.

“When the FAA was going to have layoffs, Congress said we fly, our donors fly and that Friday we voted to have furloughs for the FAA. Head Start is just as important as the FAA.”

For Alexander, cuts to Head Start means he will have the unenviable task of laying-off facility staff.

“We’re talking teachers, social service staff, transportation staff – the staff that provides direct services to our kids,” said Alexander, who has been with Head Start for 21 years and a director for the past five. “It’s not just the children; we provide a lot to the parents.”

Alexander said his staff teaches parents how to provide better nutrition for their kids, better methods of scholastic preparedness and other parenting skills.

“There are 90 children right here who won’t be given the best opportunity to be successful in school (if federal cuts are made to Head Start),” said Alexander.

Ellison said other real consequences of sequester include the possible loss of 1,000 civilian jobs at the Minnesota National Guard 133rd Airlift Wing.

If no action is taken, federal cuts to programs such as Head Start and job cuts at the 133rd will commence as early as October of this year.

“We need to end the sequester. Our country can afford it,” said Ellison.